This time last year, most of us heard about Johnny Fall Down for the first time. Their Rare Apple Cider was hitting the shelves. And not staying there very long as it was being snapped up.

I first visited the orchard at Killahora, near Glounthaune, last March and met Barry and Dave. Dave has a particular interest in trees and plants while Barry is the man that turns the fruit into alcohol. The combination is a natural, has expanded and is expanding. Watch these warm south-facing slopes for more delicious developments.

Then they had over forty apple varieties. Now, on last week's visit, they told me thay have over 114. They also have about 40 pear varieties here, the latest a bundle of young Welsh pears. A similar bundle is on the way from Austria (Barry is thinking schnapps!).

They now have three products available commercially, including the latest edition of Johnny Fall Down, their award winning Bittersweet Cider. They have also created a uniquely Irish Rare Apple Port (Pommeau), and the first Ice Cider created mainly from Bittersweet varietals.

I came across the Pom’O and the Rare Apple Ice Wine at SpitJacks on Washington Street where they form part of the amazing Cheese and Fortifieds Menu. More details about the Pommeau here .

The Ice Wine which may, in the future, be barrel aged, is made from the juice of their rare apples, concentrated using freezing temperatures and slowly thawed. The resulting beautiful deep and rich must is slowly fermented for a year and stopped before completion, leaving half of the apple sugars intact…nothing is added, so the abv is a low 10.8%. 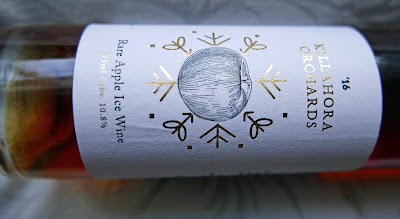 The south facing land exposed to the Atlantic, “gives us the opportunity to create an infinity of expressions of the land itself, that will surely change year to year, but we hope will retain a familiar style and optimum quality”.

The pair are hugely enthusiastic about the future, Barry always thinking about the various blends that are possible and that will become possible as the trees mature.

And it is not just the apples and the pears in their neat lines. The hedgerows around their 30 or so acres include fifteen old crab trees, all with different characteristics that show in the fruit (apple babies don't grow up resembling their parents).

Even months after the crab crop had been gathered in, there was still enough solid fruit on the ground to taste last week. The first one we sampled was close in taste to a normal green apple, the second on the opposite hedgerow, was much sourer.

And, as if the 15 crab trees (some of them quite large) aren't enough, they have planted other fruits in amongst them. Early days yet! But it’s not all plain sailing. Storm Ophelia did some damage to the established fruit trees in the orchard and one or two in the hedgerow have been chewed by the local wildlife!

OS Maps from 1838 show an orchard in the same place as it is today, with the same old walls bounding it, and the same south facing slopes slowly ripening the best of fruit. The revival is moving forward impressively and with help from Mother Nature! A beekeeper, Mick, has been recruited to set up hives around the orchards and we met him during the visit. 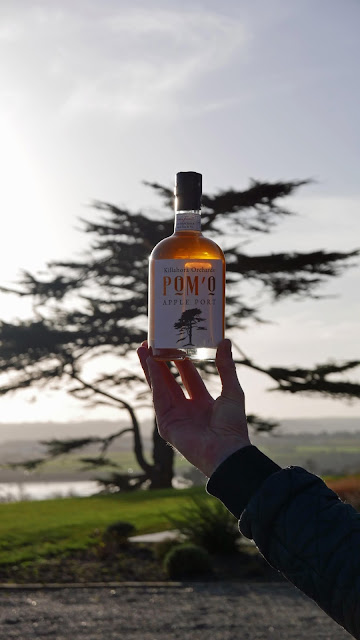 The bees will be helping with pollination. Already though Barry is looking forward to an interesting honey. I think some of it will end up in bottles rather than jars!

What is also interesting is that the operation has found a natural ally in the mixologists at Cask. They bounce ideas off one another and often find out that two heads are better than one. Recently,  with help from others, they combined to make the world’s first single field cocktail!
Barry thinks Cask is a marvellous place, one of the best in Ireland and the UK, and was not at all surprised that the McCurtain Street venue swept the boards at the Irish Cocktail Championships. 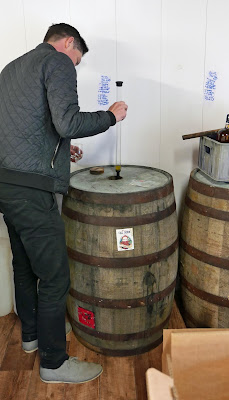 Dave is just as enthusiastic (and knowledgeable) in his field. Last year, he showed his skill with tongue and groove grafting. While not quite the season for it, this time we got an example of Chip budding which is one of the easier forms of grafting.

A bud, rather than a shoot, is attached to a rootstock to produce a new plant. With practice, this technique can be mastered by anyone and, as just one bud is needed to make a tree, it is very efficient. Amazing how one tiny bud contains all the genetic material necessary to take over the host.

If there’s a lot going on outdoors, there’s a hell of lot going on indoors. In the cidery itself, there all all kinds of containers quietly getting there. No doubt some “experiments” will be cut short but others will succeed. There are three ex Bourbon casks employed here. We got a taste of one, a very encouraging taste indeed with the promise of whiskey notes to come in some future Killahora product.

So what can we expect next from Glounthaune? An apple champagne, no less! It is underway. Lots of bottles standing upside down in the cool cellar, a 180 year old shed. Just like champagne, the sediment will be frozen in the neck of the bottle, disgorged and then replaced with a dosage (a little sugar). The mind bubbles.