But there were good times too and the family kept going through it all, making those still much sought after sweets in the same building (the upstairs also used for years by Fr O’Flynn and his Cork Shakespearean Society, known as The Loft). So the same building for the sweets; different faces now with Danny (Jimmy’s son) and Tony (Danny’s son) doing the hard work.

Tony showed me some of the Shandon Sweets machinery when I visited the other day. Nothing too fancy here, just well-made mechanical machines that seem to go on forever.

He showed me one of their original press moulds. “That’s a hundred years old at least,” he said. “We have a few of them. It is easier to switch the machine than the insert when we have a different sweet going through.”

A sheet of the sweet-base goes through and the pressure squeezes it into the moulds. The sheet is still together when it come out the other side but the connection between each is so slight that is quite easy to shake them up and the individual sweets fall out.

And what’s in that base? Just sugar, glucose and water. It is heated in the large cylinder to 300 degrees and that reduces it down to “a molten sugar”. Check here for a video of Tony pouring it on to the work table.

Some hard work on the table follows, about 40-45 minutes of pulling and rolling and then you have a product ready for the press-mould.

Or maybe for the Batch Roller, a bigger machine. A large “ball” of clove sweet, for example, is put in and the machine squeezes it down to “ropes” from which they cut either the clove sweets that come in your little bag or maybe a Cork Rock. This machine is of a more recent vintage, fifties or sixties. See it in action here.

Indeed, there is little enough modern machinery here. The muscles are relied on as most sweets are hand-made. But they do have one luxury, an electronic packing machine. “This can do the work of two,” enthused Tony. “And was very handy in the run-up to Christmas.” Then the Clove Rocks, Mixtures, Acid Drops, Apple Drops, Pear Drops, Lemon Rock, Butter Nuggets, Rhubarb & Custard, and more, were flying out the door.

The colours you see are all natural powdered food colour while the flavours come from natural oils. Tony told me that the multi-coloured sweets, the clove and the Bull’s Eyes for example, take a bit more work.

Boiled sweets are their mainstay and there’s been little or no change over the decades. “They are all natural, no preservatives, no additives, all Gluten Free.” He is often asked for sugar free sweets and did try them at one stage. They tasted quite well but the demand wasn't enough and the line wasn't continued.

I hadn't thought about it but sweets are seasonal. Tony pointed out that Cough Drops and Manuka Honey Lozenges are popular in winter while summer favourites are strawberry and pear drops and mixtures.

Then he told me that they make their own marshmallow here. And then I remembered it. It comes in its own cone, much like an ice-cream cone. And they also do fudge and toffee. 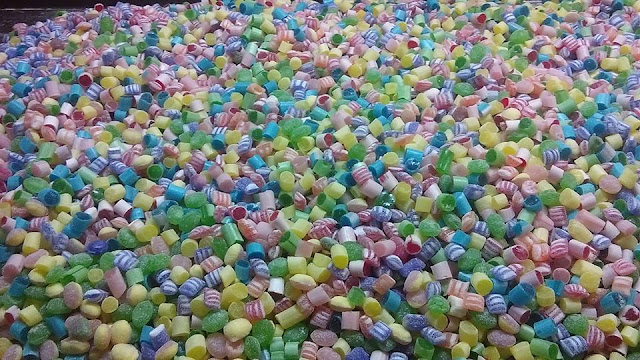 And where do they sell all these goodies? All around the country, from Cork to Donegal, both retail and wholesale. And there is also a great demand, maybe not in January but for the rest of the year, for sweets at the factory door. “When the weather picks up you could be kept going all day with it,” said Tony whose niece is called into action for that period. 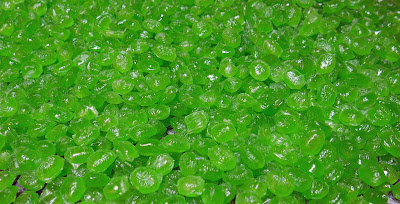 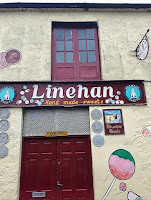 By now, Tony and Danny were getting down to business. So I said goodbye and headed down John Redmond Street sucking a newly finished apple drop and wishing and hoping that the Linehans will still be going strong, still making those traditional sweets in 2028!