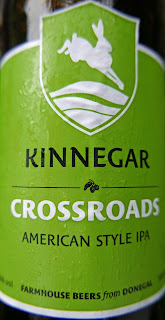 Had a bit of an American IPA duel recently with Kinnegar's Crossroad and California’s Lagunitas (lag-goo-KNEE-tus) the protagonists, both bought from Bradley’s of Cork.

Thanks to the US guys for the pronunciation guide. Their Indian Pale Ale was superb as was indeed their 12th of Never Pale Ale.

There were two rounds, both level going into the second. I had brought in one of Donegal diaspora for this one but my islander couldn't split them.

That left it up to me and I gave the nod to the aromatic citrusy crisp Crossroads, our Taste of the Week, and its nicely bittered finish. Close-run thing tough. Might have to call for a replay!