In France, some of the world’s best wine-tasters and most refined palates met in Bordeaux to honour Erick de Sousa!

Last summer, the world’s best sommeliers paid tribute to the standards and quality of the champagnes produced by the talented de Sousa Champagne house.

Erick de SOUSA, with his pioneering of biodynamics and a constant search for ways to improve the quality of his Champagnes, now heads one of the best Champagne houses. 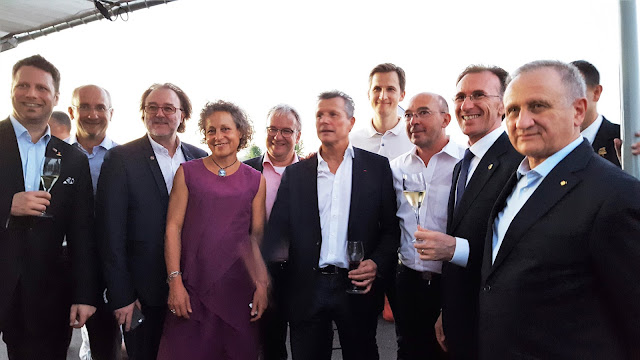 
High-level gathering
Erick de Sousa is recognised by
the best sommeliers in the world!
France - last summer, some of the biggest names in oenology met up in Bordeaux during the
professional master’s programme.
In June, some of the greatest sommeliers got together for an "historic" photograph.
From left to right, there is Philippe Faure-Brac, the world's best sommelier 1992, Claire Lurton,
who hosted the event, Markus del Monego, best sommelier (Germany) 1998, Serge Dubs (France)
1989, and on the back row: Raimonds Tomsons, this year’s happy winner, best sommelier in
Europe and Africa, next to Erick de Sousa, Paolo Basso (Italy) 2013 and Giuseppe Vaccarini,
world's best sommelier in 1978.
This high-level meeting, which has now placed Erick de Sousa among the world’s biggest names in
wine tasting, shows him to be recognised as one of the world’s best Champagne producers and
winemakers.
Champagne De SOUSA: Erick De SOUSA - Ph.: +33 (0)3 26 57 53 29
The rigours of organic production for natural excellence

It was back in 1986 that Erick De SOUSA, representing the third generation, took over the reins of the family business based in Avize, in the heart of the Côte des Blancs. His vineyard of 9.5 hectares brings together the finest Grand Cru Chardonnay classified vineyards (Avize, Oger, Cramant and Le Mesnil sur Oger) but also Pinot Noir (Ay and Ambonnay). Passionate about local produce and his region, Erick De SOUSA, helped by his children, has long been engaged in organic viticulture, refusing to use pesticides and fertilizers, but favouring natural active ingredients (plants and minerals) to protect the vines. One better, this strong supporter of natural practices is a pioneer of biodynamics, working some of the vines with a horse, using rock crystal to improve soil quality. A respect for vines and the land passed from generation to generation, which leaves its mark on de SOUSA Champagne and gives it its remarkable and noticeable qualities!

A Champagne house on the move!

The house of de Sousa comes in for high praise also in Wine Revolution by Jane Anson, particularly the Mycorhize Grand Cru Extra Brut NV. "I can't recommend highly enough getting hold of this 100% Chardonnay fizz - or any of the Erick de Sousa range of terroir-driven Champagnes." The Mycorhize refers to the association between mushrooms and vine roots, a healthy sign.
Champagne de Sousa