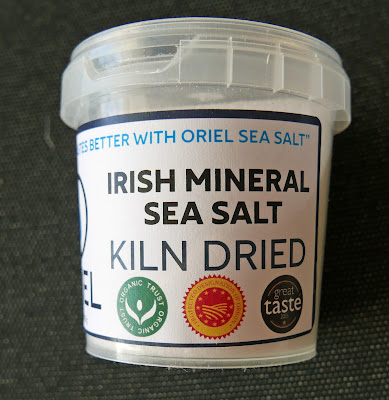 Taste of the Week comes from County Louth and is the Oriel Kiln Dried Sea Salt. It’s Irish, it’s natural, nothing has been added. And it is top class.

I’ve had the chance to sample the Oriel salts over the past six weeks or so and this particular one, free flowing and fine grained, has appeared on the table non-stop. This mineral rich sea salt has a powerfully smooth taste and allows you to use up to 25% less with no compromise on flavour. It has been endorsed by some of Ireland's top chefs, Ross Lewis of Chapter One among them.

This totally Irish salt has a deeper richer flavour yet is doesn't overpower your dish. Even if you add a little too much, it means more flavour, not saltier. Ed O’Donnell of O’Donnell Crisps: “..the taste profile of Oriel Sea Salt was supreme..”. 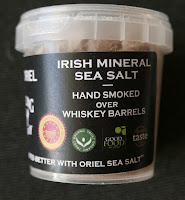 It dissolves and disperses rapidly in recipes. No wonder the country’s chefs are praising it. The chefs will be also be happy with Oriel’s Whiskey Smoked Sea Salt. This has been smoked over Teeling Irish Whiskey freshly emptied 90 year old Nicaraguan Oak barrels to produce a “smokiness that is simply spectacular”. Read Joe McNamee’s hymn to it here.

The third product, all three are available in 250 gram tubs, is their Mineral Sea Salt Natural. This is slightly moist with a powder like grain. “For those who like to pinch.” 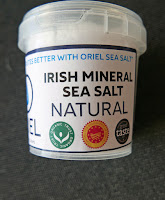 Whether you use the Oriel as a finishing or as an ingredient, you’ll be moving on up the flavour scale. It’s a little like changing from mainstream beer to craft - you’ll never go back!