November 20, 2017
Garden to Plate at Ballymaloe.
Superb Craft Fair Too.

There were gasp when Ballymaloe House gardener Mags Coughlan told us she grows 4,500 leeks here each year. Soon we would see some of them on our plates as we enjoyed lunch in the house. The garden tour, a mead tasting, a long leisurely lunch and a visit to the ever increasing craft fair in the Grainstore and Big Shed, were all part of a lovely day that brought the curtain down on the Munster Wine and Dine activities for 2017. A good day. A good year.

Hazel Allen introduced the fifty or so of us to Mags who told us the aim here in the walled garden and surrounding area is to grow “seasonal and unusual”. Even with Mags working flat out, there is no way the garden could fully supply the house, so Ballymaloe gets much of its regular plant and vegetables supplies from local growers, a traditional relationship maintained.

That leaves the gardener, in consultation with the chefs of course, to concentrate on something different, a crop of sea-kale for example, followed in turn by asparagus and artichoke. And then there are also edible flowers and flowers for decoration. One of the specialities of the walled garden, taking advantage of a south-facing wall, are peaches. Lots of herbs here too, of course.

All is grown from seed so that means glasshouses and we walked through there admiring the lines of harvested pumpkins (also on the day’s menu). We were then shown the relatively new cider apple orchard; varieties here include Dabinett and Bramley. Here too we saw the hazel bushes which provide quite a harvest and have a bit of growing to do yet!

All had been quite in the fields where the pigs are kept until the arrival of our group. Then little groups of the younger pigs came rushing out to greet the visitors. They may not have been so eager had they known that the same people would be eating their older siblings later on. 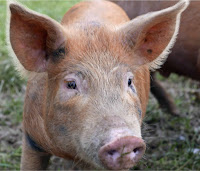 Back then to the conservatory room in the house for an aperitif, thanks to Kate Dempsey of the Kinsale Mead Co. We sampled her Atlantic Dry Mead and also Wild Red Mead  – and then she made some delicious cocktails using her mead (and also the new Beara Gin). Quite a few were very impressed by the mead. Both meads are honey based and are rapidly becoming widely available in Supervalu’s and speciality shops such as URRU in Bandon and Bradley’s in the city's North Main Street.

Time now for lunch, the main event. A good start is half the battle. And so it was here with a delicious warming bowl of Garden Pumpkin Soup with Chilli and Parsley Oil. More simple food followed, simply delicious Ballycotton Crab Paté with cucumber and dill salad.

We had a choice for the main course. CL chose the Poached Ballycotton Monkfish with Chive Butter Sauce served with Leeks and Romanesco while mine was the Roast Ballymaloe Farm Pork with red cabbage and Bramley Apple Sauce. Each, with Pommes Duchesse and Glazed Carrots on the side, was superb.

The temptation levels then soared with the arrival of the famous Ballymaloe Dessert trolley. We were like the little piggies! Pavlova, poached pears, chocolate cake (and sauce), and so much more, all washed down with little sips of sweet Jurançon. Pratsch Gruner Veltliner and Solstice Rhone Valley were the earlier wines.

After the tea or coffee, or a garden infusion, there was a quick review of 2017, a raffle for foodie prizes and an announcement that Munster Wine and Dine had decided to donate €300.00 to Penny Dinners.

Some of us then took a walk around the annual craft fair. The opening day, Saturday, had been busy but one stall holder told me Sunday, the day of our visit, was even busier and she was looking to getting her feet up for the night! There were some gorgeous crafts here but, looking for a particular item with certain restrictions as to material, size and colour, proved mission impossible for me! The search begins again next week at the big Craft Fair in the City Hall and the smaller one at Franciscan Well Brew Pub.

Darkness had now settled on this amazing East Cork farm and our bus had arrived. A very satisfied group headed back to the city, bang on schedule. Here’s to another great Munster Wine and Dine season in 2018. Happy Christmas everyone from Eithne, Richie, Colm, Beverly, Michael, Stuart, and yours truly.