Master the art of great soup from six simple broths. Broth to Bowl by Drew Smith. 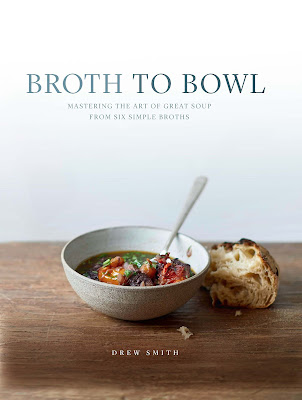 Master the art of great soup from six simple broths.


Broth to Bowl by Drew Smith.

“You might find your definition of the word soup somewhat stretched in these pages but that is the way of my kitchen.”

So says author Drew Smith in the introduction to his new book, Broth to Bowl. The word soup is “stretched” here, in many delightful ways as he shows us how to master the art of great soup from six simple broths.

And, by the way, Drew is adamant: “a stock cube will not do”. “For soup to be nutritionally optimal and full of flavour, you must begin with a solid foundation – a good broth.”

“Soup is the heart and soul of the kitchen. Menus invite you to think that a soup is a single event, which it is if you are running a restaurant. But at home, probably the last thing you want is 75 bowls of cauliflower cheese soup.

What we want is evolution, so one recipe leads logically into the next and so on. Less work. One job = three or four or more, completely different meals, a vegetable tea becomes a chunky vegetable broth becomes a creamy soup. The same liquid can find its way into ragouts, stews, casseroles and all manner of sauces.”

If you are on a budget, this book is for you. “It may seem at first glance that we are using humble, cheap everyday ingredients, but for the most part these are what our bodies need and crave. We have become very wasteful as a society. We like our meat to be neat little red fillets.

But much, if not most, of the nutritional benefits of eating meat at all are to be found in and around the bones, the marrow, the collagen-rich elements like cheek and trotter. We buy breast of chicken and ignore the rest of the bird, despite knowing through history that a soup made from the carcass has always been given as a restorative. So too was beef tea.”

Let us go through the section headings. We’ll start with Vegetable Tea. It is the first recipe you’ll see and that is the start, and also the basis, for many more, including Potassium Broth (“If you had to live on one simple recipe, then this might be a good choice”), Kale Vichyssoise, Laksa and Gazpacho (for when the temperature rises above 25 degrees!).

Now we move on to Chicken (Drew is not a fan of buying poultry in pieces) and other birds. Start here with chicken broth, roast or poached. Then hop around the world with Quick Tom Yum, Cockaleekie, and the French St Hubert’s Soup (pheasant with lentils).

The red meats are next, beginning with the Basic Beef Bone Broth and that can be the basis for so much more. There's a Proper Borscht, a Rich Man’s Pho, a French Potée (a soup, broth and stew all in one), and the legendary Italian bollito misto.

There is a shortish, but no less interesting, chapter under Fish, including Fish Chowder, Jane Grigson’s Lobster Bisque, Dalston Bouillabaisse, and a magnificent Oyster Soup!

And we stay with the sea as we turn the focus to Kombu. How about a Japanese Bonito Broth? Monkfish in dashi with ginger? A Tonkotsu Ramen?

It is much the same pattern all the way through. Start simply and build from there. So, in the end, it may be more to accurate to say that soup (the food that is), is expanded, enhanced, deepened, in this well laid out, well illustrated, book, while happily admitting that soup (the word) is well and truly stretched.

* In addition to the recipes, there is advice on buying your produce and on the equipment you’ll need. And a list of various garnishes too.

This is a sequence. It starts out as a light tea, becomes a soup and then transforms itself

again and again. You can drink this first-stage broth as an alternative to tea and coffee.

Once you get the hang of it, vary the spices, vegetables and herbs with the seasons.

Put 4 litres of water on to boil in a deep pot or saucepan while you deal with the vegetables. Peel and trim the carrots and cut into thirds. Peel and quarter the onions. Dice the leek. Quarter the potatoes – you can leave the skin on. As the water comes to the boil, drop the vegetables in and add the spices. Trim the top leaves off the parsley, save for arnish, and throw the stalks in the mix. Cover and simmer gently for 30 minutes. Strain and discard the vegetables, keeping only the liquid. Warm through, garnish with a few leaves of parsley and add a slurp of olive oil if you like. Serve in a mug or glass or take a thermos to work.

COOK’S TIP: There’s nothing wrong with the leftover vegetables. You can have them for dinner, dressed with a little meat broth. Or take out the potato and carrot, dice and mix with mayonnaise for a cold salad.