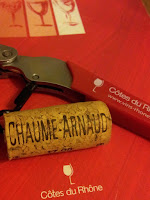 A Pope and a Parker were among the key figures that enhanced the reputation of wines from the Rhone Valley. Wines had long been made in the area even before Julius Caesar arrived in Chalon-sur-Saône and found two Romans already in the wine trade there.

Fast forward now to 1309 when Pope Clement V moved the papacy from Rome to Avignon. Most of the wine drunk in the temporary papal palace (they also had a summer palace called Chateauneuf du Pape) was from the local area and so the fashion for Rhone wine began in earnest.

Clement of course came from a Graves wine family (think Chateau Pape Clement!) and would be followed by five more popes before the move back to Rome. The papacy was here was 67 years, a lot of wine!

The Rhone was firmly among the most respected wines in France when infallibility of another kind arrived in the 1980s. Robert Parker, the American wine guru, "intervened". He just loved the naturally ripe style and gave them very high scores and his many international "followers" took his word for it, bought the wines and found out for themselves just how good the Rhone bottles really are.

In between Pape and Parker, there was the wind of 1956, perhaps even more influential than the famous pair. Then the Mistral battered the region for three weeks and contributed to the temperature dropping to minus 15 degrees. The olive trees, then the big crop in the area, suffered badly but the vines resisted so well that a majority of farmers turned to vine cultivation. 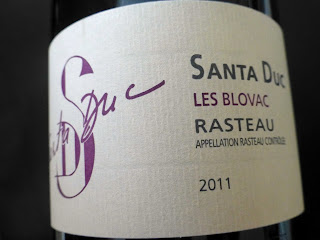 If you’re thinking of celebrating Rhone Wine Week, then this Rasteau is a great choice. Even Robert Parker agrees, at least he did seven years back when he praised Yves Gras of Santa Duc saying he “produces some of the best buys in Cotes du Rhone”. Viticulture in this vineyard has always been organic in style and intent and full certification was achieved in 2012.

This wine is the typical Southern Rhone blend, often called GSM from the initials of the three varieties. The 2011 is a blend of Grenache (70%), Syrah (20) and Mourvedre (10). There has to be a minimum of 50% Grenache, so this is well above that. The fruit is late-harvested so no shortage of ripeness or power - note the ABV of 15%. No oak is used and the wine is bottled without filtering.

Colour is a deep ruby and the legs are slow to clear. Aromas are complex, a melange of red and darker fruits, hints of pepper too. Upfront on the palate, generous fruit flavours prominent, well balanced though, tannins still grippy and there is a persistent tingly finish. Very Highly Recommended.

Rasteau was, from the 17th century, best known for its fortified wines. But was gradually forced to accept the conditions of the C. d. R village appellation and eventually came onboard in 1967 and gained the coveted cru status for the village in 2009.

You can still get a Vin doux Naturel (VdN) here, of course. The red is perhaps best known and the only one that I've ever tasted. That was in the village itself and led to a little argument with the salesperson. She had suggested pairing it with Stilton but I flew the flag and told I’d be taking it with Cashel Blue. We got on very well after that. 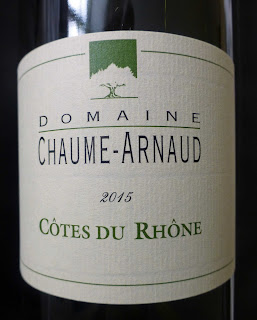 There are, as you know, many skilled wine-makers in the Rhone and they don’t suddenly lose those skills when they turn their attention to white wines. Indeed, their well-made whites can often be better value than the more popular reds. In any case, Chaume-Arnaud, (along with Santa Duc above), is one of the area's leading producers, according to Grapes and Wines.

This particular bottle is a blend of Marsanne, Roussane, and Viognier. Other white grapes that are permitted are White Grenache, White Clairette and Bourboulenc.

You see a lot of lovely light gold in your glass. The aromas, white fruit and blossom, are harmonious. Refreshing white fruit flavours abound on the palate, with a refreshing acidity at play, well balanced, and with a long mineral-y finish. Very Highly Recommended.