The Swagman Rocks in Sligo 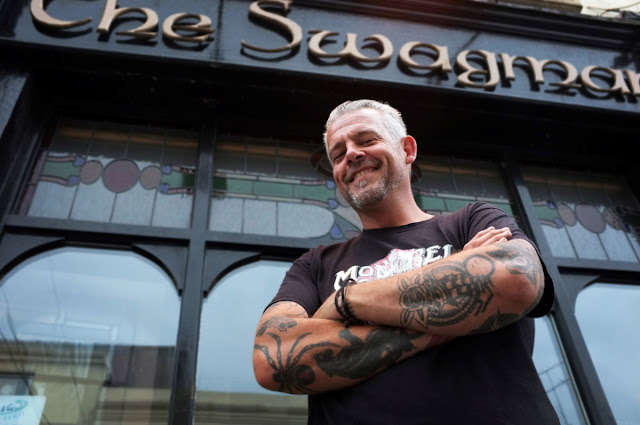 It’s a busy Friday evening at The Swagman in Wine Street, Sligo, and owner Dale Barber is on duty, as always. There are Australia flags (Irish too!) and memorabilia around the walls and ceiling but Dale is cheering Ireland this evening as they take on Moldova in the World Cup. The Australian has been in the news in the town over the past few days having cooly helped stop the robbers of a nearby phone shop.

Ireland score and there's a large cheer. Dale tells me that goal will be cheered in small towns across Australia. It is important to the diaspora, something that we don't always recognise in this country. Dale is sometimes puzzled by the lack of enthusiasm for the national team when things aren't going well and amazed by the contrast when we qualify for a finals tournament.

The no frills pub is a bit like the straight talking Australian from Tangambalanga (Victoria) where his parents had a busy pub offering food and drink and accommodation. And indeed, many years and countries later,  advice from his visiting parents helped him decide on buying the Swagman. Wife Sinead, whom he had met on his travels, came up with the name and so, the Swagman was born at the start of the decade.

The Swagman has over one hundred craft beers and we enjoyed an ale from local brewers, The White Hag, as the conversation turned to food and its provenance. Dale offers a simple but very good menu, well sourced and served on white plates!  It is all about fresh, local and fair here, the fair meaning that it is well priced. And, aside from the Kangaroo offering, a nod to his heritage, the source is local because that represents his values. 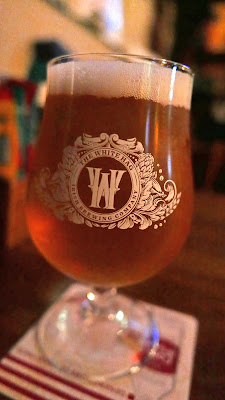 Dale is something of a gardener himself and indeed would love to do more on that front but that would take from his work at the pub. He speaks enthusiastically of picking your own in the tunnel and almost poetically when describing the fresh taste of home-grown tomatoes or indeed of any fruit or vegetable. And of course, much of the produce from home is used here in the Swagman where you can expect a daily special called “Soul in a Bowl”, a roast of the day, and pizza (making pizzas is another of his accomplishments!).

The two of us and Dale were keeping an eye on the match but as it approached half-time we had to leave. We had a dinner reservation nearby and would, as always, honour that. But it would have been good to stay and eat and watch the rest of the game in this pub with soul. Instead it was firm handshakes all round as we headed into the street.

While The Swagman has a rustic, maybe outback, feel, the newly opened Anderson’s on the banks of the dark Garavogue is a creature of the 21st century, inside at least. It is plush and colourful and lively with a cocktail menu on the counter.


But some craft beer as well and that harks back to the origin of the building which once housed a brewery owned by the Anderson family and called Lough Gill. Their Anderson’s Red Ale was the biggest selling beer in Connaught in the 19th century and that original brewery closed early in the 20th.  The exterior has been retained.

Earlier, I had visited the new Lough Gill Brewery (just a few miles away) and was told the story. The new brewery (2016) started by making their take of the Anderson’s Red Ale and it is on sale around the town and also, right here in the revamped old building, there is a tap. I very much enjoyed that Ale here in Anderson’s, the purpose of my little pilgrimage.

Before I headed off for another dinner, I also drank, for the first time, an offering from Dublin’s Five Lamps, a very enjoyable Liberties Pale Ale. Didn't see their Monto Red on the taps. Maybe, one bit of red is enough in Sligo town.