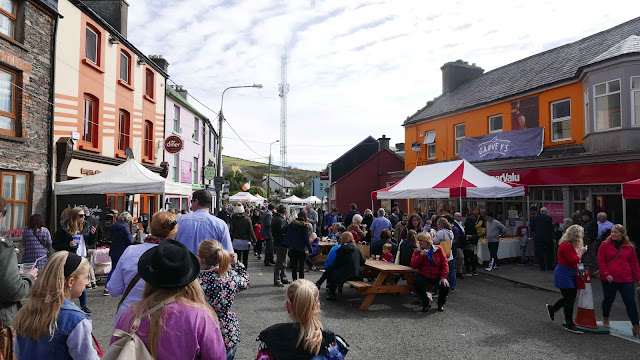 We were sitting (well, standing, no room to sit) in the sunny back-yard of Dick Mack’s Pub in Dingle last weekend, coming to the conclusion that we were attending the best food festival in Ireland. As we finished up and made our way down Green Street, we met different groups of friends, all in town for the festival and all agreeing that it is indeed the best.

The Taste Trail that we, and they, were following is a major plank of Dingle’s success. For €22.50, you can buy a book of trail tickets. Present a ticket at any of 72 participating outlets and you’ll get a taste, two tickets and you’ll get a different offering (maybe better, maybe bigger). The outlets can include restaurants and cafes and pubs, but a music shop, a Surf Shop, an art gallery, may also host a food producer or a wine seller. The choice is huge. And often impressive. 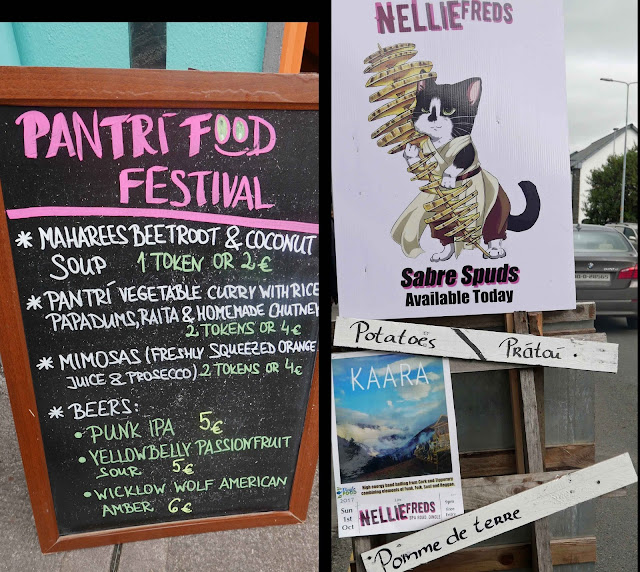 Kick off, on both Saturday and Sunday, is 1.00pm. We weren't going to be in town on Sunday so we were determined to get the best from Saturday and we certainly did well.

Out of the Blue was quite close to our hotel. We had eaten there the night before so knew its quality. Here, for one ticket or two euro, we got a Taste of the Blue, a helping of calamari with an Asian style sauce. We ate on the sunny bench outside and soon headed off towards the next stop.

Murphy’s Pub was listed at #8 on the list. We joined the long queue and our short wait was rewarded with a Pulled Duck in a mini Pitta Pocket with sweet red cabbage. A delicious combination and plenty of it, again two euro.

We passed stalls selling lager and fresh barbecued Tuna, even (inadvertently, sorry Sam) one selling Cloudberry’s macarons, before landing at The Dolphin Shop. Here Ruggero Sileri was busy serving his Italian Traditional Porchetta - slow-cooked (10hrs) loin of pork, served on bread with a thick layer of caramelised onions. Again a massive and tasty mouthful for the minimum.

We had intended to get to the other side of town and thought we’d better get a move on, skipping excellent offerings from the likes of the Charthouse and Fenton's and the ever popular Bush Tucker Kangaroo Skewer at Dingle Surf.

We were heading for Bacus on Green Street where Gaelic Escargot were selling their snails with a garlic and herb butter and Bacus sourdough to soak up the sauce. Delicious, though I got some curious stares as I poked the snails out of their shells while sitting on the steps of the church.

Nearby the local Fire Brigade were doing a demo, showing just how dangerous a fire in a chip pan can be, often started inadvertently by a man coming home from the pub and then falling asleep. Even if you're fully sober you’ll need all your wits about you to safely put out such a fire. If you come across any such demo in your area, do take the time to observe and learn.

Massive queues, as always, at the Little Cheese Shop, who were offering Raclette, the Swiss dish where the cheese is melted on to bread with a pickle or two on the side.

By now, we were heading down Main Street, leaving behind Spanish Wine and Tapas at the Original Kerry Craft-shop, Kerry organic Rose Veal Kofta at Kennedy’s Bar and Dingle Salted Grass Beef Taco by Dingle Cookery School at the Carol Cronin Gallery.

We kept on going to meet Pascal and Colm from Le Caveau who were doing a wine tasting at Ida’s Restaurant. I'm familiar with a few of the wines but was surprised when Colm poured a sample of what looked like a rosé only to find it was a Pinot Grigio, produced near the Dolomites by Foradori.

Then he poured some Bravos Volcanico Pais from Chile. You'd be forgiven for expecting something rough and strong. But, no. This was a very pleasant and drinkable red wine, with a low enough ABV of 12.5%.  These two drops alone prove you should never go to a tasting (either food or drink) with your mind made up. Sample it first!

We weren’t finished yet! Nelliefreds on the Spa Road (out towards the brewery) is listed as a garage/bar. It is a venue for music, drink and food. And their offering was an unusual Light Sabre Spud. Explanation: Tornado potatoes/fries are a popular street food in South Korea. Using a special slicer, the potato is spiralled on a stick and then fried until crispy when delicious herbs and spices are added! Keep your mind, and mouth, open!

Back on Main Street again, we called to Pantrí. We bought on the double here, including a lovely Vegetable curry with Rice and Raita. But the favourite was undoubtedly the Maharees Beetroot and Coconut Soup with Chive Cream.

Were we finished? Not quite. Walking down Green Street, we decided we need a drink and joined hundreds in the back-yard of Dick Mack’s. Obviously, many were in and out of the bar but our destination was the small outside bar serving the beers from the newly opened brewery (also on the yard). 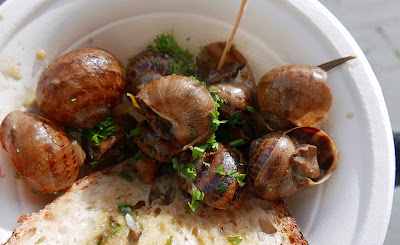 With the sun out, we decided against the excellent stout we had enjoyed the previous night and instead ordered their Session IPA (4.6%) and the Amber Ale (also 4.6). And it was then, as the beers sank down, with the place packed and food being served, that we concluded that this is the best Food Festival in Ireland!