Holy Smoke On The Mardyke. Temple of Fire and Smoke


Temple of Fire and Smoke

If you visit Holy Smoke, and you should, you’ll be visiting a kingdom of fire and smoke. And your royal guides will be John Relihan and Deccie Walsh.

John welcomed us to their tasty palace on the Mardyke last Tuesday night for a rather special evening: six courses of pit smoked BBQ paired with either Irish Craft Beer or Irish Whiskey. Caroline Hennessy, of Eight Degrees and author of Slainte, introduced the beers while Killian O’Mahony, a recently qualified cooper at Midleton Distillery, told us about the whiskey.

Did you know that Holy Smoke is housed in the original Woodford Bourne cellars (1875), that stored at one time over 50,000 gallons of choice whiskies, Cognac, rum and casks of wine, sherries and ports?

John told us they cook  here “with fire”, using a Japanese Robata grill and a large smoker. They use sustainable charcoal (supplied by an Oxford firm). Ribs take four hours while brisket and pork can take 14 to 16 hours. He stressed the importance of using the right charcoal and the right wood.

He has trained with some of the best, including Jamie Oliver, and in many cuisines including BBQ, Italian, Spanish, Japanese. “It’s been quite a journey,” said the man from Duagh in Co, Kerry. They have just introduced steak to the menu - “you can expect lots of different cuts and do check out our Jazz event on October 25th.” Link is here.

Six courses seems like a lot. But the Holy Smoke team judged this to perfection. It was quality all the way but the quantity was spot-on too, not too much and certainly not too little.

After a welcome drink of Prosecco and a bowl of pickles and pork scratchings, Caroline introduced the first of the beers. “The Franciscan Well were among the first of our craft brewers and their traditional red ale, the Rebel Red, is great with pork.” And our first dish was Gubbeen Hot Links Sausages. These spicy sausages, commonly used in southern US barbecues, got the taste buds up and running.

More pork now but of a very different kind: Wet Rubbed Baby Back Ribs (marinaded overnight and smoked for four hours over oak). Caroline praised the quality of Irish Malt and said Eight Degrees were proud to use it. And certainly the Howling Gale Pale Ale had a good solid base of malt, a lovely aroma and not too hoppy and proved a good match for the ribs and the cornbread.

And next came one of the highlights of the night: Pulled Pork Slider (shoulder smoked low and slow for 14 hours). Amazingly succulent and delicious and the Stonewell cider, that Caroline had been keeping in reserve, proved an ideal match.

Head Chef Deccie Walsh managed to take a few minutes away from the kitchen and told us of his love for slow cooking and nose to tail cooking. He really enjoys this type of event. After last night, we all do!

Another highlight next: Pit Smoked BBQ Chicken Wings (marinaded, smoked for 4 hours and char-grilled). Accompanied by pickled celery and a blue cheese dip, this was a superb mid-menu course, fingers in action again. And the beer? Another from Eight Degrees: the Barefoot Bohemian Pilsner, a nice light beer in the traditional Czech style and excellent with the wings.

Brisket Burnt End Sliders were now arriving on the table, another highlight for me, all the more appreciated when we heard that their journey to our plates had started during the storm of the day before.

We had a two drinks to go with this one. The first was a can of the Franciscan Well Irish Pale Ale, a favourite of mine. “Don't drink from the can,” Caroline advised. “Pour it into the glass, the better to appreciate its lovely amber colour, the citrus aromas. As you drink, you’ll note the citrus bite.”

Killian told us about the importance of the casks as he introduced the Green Spot whiskey made at Midleton from pot still whiskey aged between seven and nine years, with 25% coming from sherry casks.

Time then for dessert: Chocolate, banana and caramel brownie, with a whiskey sauce. Obviously, if you had whiskey remaining (I didn’t), you could have tried a drop with this.

The final beer was the award-winning Amber Ella from Eight Degrees. As Caroline said, it has a lovely malty flavour to go with the brownie and the sauce. First brewed in 2014, this American style amber surprised the home brewers by taking a bronze in the World Beer Cup in the US. “It was  a big surprise,” recalled Caroline. “ It was a boost for Eight Degrees but also a boost for Irish craft.”

Killian had ended his whiskey intro with a toast to friendship and the lovely evening finished in that kind of spirit, old friends met and new friends made. Thanks for the invite and Slainte to all at Holy Smoke. 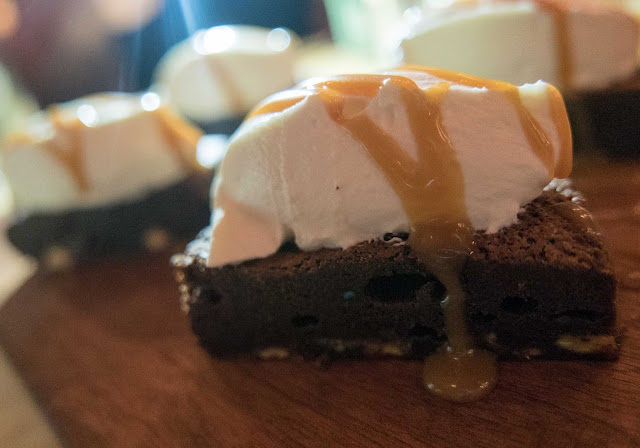