We have an ex Dingle woman as a neighbour in Cork and if she hears we’re heading for the peninsula, she says: “Why go, it will be covered in fog. That’s why I left.” The weather forecasts can be equally discouraging. My advice, based on years of practice, is to ignore both Mrs Flaherty and the forecasters. Just go and enjoy yourself.

Our latest examples came last Friday. Rain was forecast for early afternoon. It didn't come until about seven in the evening. Here's what we did in the meantime.

We had been in Dingle since the day before but had some time to ourselves on Friday. First stop was the beach at Ventry, wild, windy and beautiful, the sky a gorgeous blue. Great for a walk to clear the cobwebs from the night before.

On then to the magnificent Slea Head, along with a few cars and even fewer buses. What a magnificent sight under that clear blue sky. Loads of big waves rolling in, crashing on the sharp rocks and sending sun-lit white foam bubbling towards the sands. What a son et lumière.

And then more of the same as we continued around the peninsula. Waited for the one shower of the morning to pass before walking up on Clogher Head to a point where we had a fantastic view of Ceann Sibeál and the various bays nearby, the waves crashing wild and white against the rocks. Magnificent.

Time now for a snack. We had already passed the Blasket Centre (where we’ve often snacked in the past) so carried on a wee bit and stopped at the Louis Mulcahy café in the famous pottery. Just a little snack, tea and a scone (apple and cinnamon), and soon we were shopping for a tea-pot, a lovely piece that was well wrapped up for us. Actually that took quite a leisurely while as we had a great chat with the gentlemen serving us.

Back then to Dingle and to the The Backyard at Blas, a new “club” for people involved in the event. Here, whether you’re a judge or producer, you could have a cuppa and catch up on the latest news. There were also some more formal talks about various aspects of a small food producer’s business, part of the #BOIFoodseries.

We were at the Be Social event, designed to be a MASTERBlast of social media tips with the #Blas2017 Twitter Fairy, Sharon Noonan, who was joined on stage by Zack Gallagher (@Irishfoodguide) and Luke Burgess of Bean in Dingle Coffee shop. They were trying to influence those producers who are too busy in the kitchen or the yard to have anything to do with social media.

Zack says he took to social media “like a duck to water” and wants producers and chefs to go on Twitter and promote modern Irish food by using hash tags such as #Irish and #food. Luke is more an Instagram fan as it has a focus on younger people and the cafe can show their “fun attitude”.

“Get a website,” said Zack "and use the other platforms to drive traffic to you. We have too many amazing producers who are scared of social media.” Sharon advised to “be yourself. Don't leave social media to an intern.”

It could hardly be expected that a 20 minute session would be a blow by blow learning experience for the audience but the over-riding message was that if you are a producer or restaurant who needs to sell (is there another kind?) then you do need to get that website up and need to use either Twitter or Facebook to engage with possible customers, not to bluntly ram your big selling points down their channels but to at least let them know that you are operating and where and when they can find you.

Next port of call was to Dick Mack’s on Green Street. Not to see the famous pub but to visit the newly unveiled Dick Mack’s Brewery in the yard. Here, an old cowshed dating back over 150 years, has been transformed into Ireland's newest brewery. So new that the samples we were drinking were all first batches.

And the three friends, Aussie, Finn and Seamus, who set up the brewery, while understandably a little nervous as the gang arrived, were soon smiling as the compliments started to flow for their three beers: a Session IPA, an Amber Ale and a Coffee Stout. All were excellent and, during the tour, Aussie promised they'd be getting even better, though hard to see how that delicious stout can be improved.

With such a promising start this is surely a brewery to watch. Initially, the beer will be on sale in Dick Mack’s but you may except it to travel, and travel well, in the not too distant future. Watch this space!

The tour finished just in time for us to head down town to Out of the Blue on the waterfront for a lovely fish dinner - separate post to follow! Back then to our hotel, The Dingle Bay, for the Food Festival Opening Night party. Paudie’s Bar was packed and rocking with the 7-piece Limerick band Trees Fall Down setting the pace, picked up eagerly by the punters (including a  lively bunch of Germans On Tour! ) Great day. Great Night. Great Town.
See also: 72 Tastes of Dingle  Out of the Blue Dingle The Skipper, Ventry 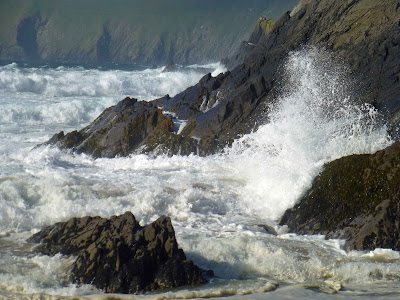