Sour is a big topic in Irish craft beer at present and indeed is the core theme at this weekend’s 17th annual Franciscan Well October Beerfest.

Beer expert Barry Fitzgerald has been involved in 16 of the 17 and was our host at an opening tasting event in their upstairs bar on Thursday evening, following a warm welcome from Marketing Manager Kate Clancy.

Barry reckons that over a 1,000 new beers have been tasted in this festival on the North Mall, “always a new experience”. “It is the longest continuously running beer festival in the country…. it has evolved into a tasting menu, all about flavour, and this weekend’s menu reflects that.”

There are some twenty-six imported beers, all special but some very special indeed, on the menu card this time, available by the pint, the half-pint and the third-pint. Barry picked three sours, by well established breweries, for the tasting session, three that you could profitably note if calling in over the weekend (the festival continues today, Saturday and Sunday, from 1.00pm each day).

The first was from Belgium, a sour brown (8% abv) Goudenband (gold band) by Liefman in Oudenaarde; quite an experience. This is a mixed fermentation beer with re-fermentation in the bottle. “It is made by the year, is different each year, you can lay it down and it will last forever. This is the 2016, its first time in Ireland and may never be here again. We have just a small amount for the festival.”

“You notice cherry, but there is no fruit used in it, the flavour comes form the basic ingredients, the ageing and the wild yeast. It is winey, leather notes, very complex. If you like sour, this is a very good one!”

Quite an amazing beer really, a real treat with a super balance, quite a sophisticated drink and a long long way from local sours that I've tasted recently. Much more detail on this beer here. 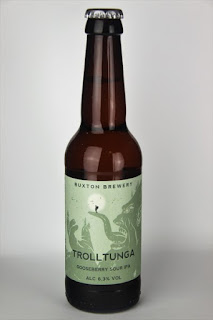 Next up was a UK/Norway collaboration between the Buxton and Lervig breweries, a gooseberry sour IPA at 7.00%, “brewed to celebrate friendship and a love of wild places”. The name of the beer is Trolltunga and you’ll get some detail on it here.

There is fruit in this one as it’s packed with sour gooseberries, “cookers” as Barry said. And there was instant agreement as lips puckered up alarmingly around the tasting tables! This was really sour. “It is at the cutting edge of the new sours…wild yeast…open fermentation.” If you are getting in to sours, this is hardly the one to start with. As for me, I was in the minority that liked it. Then again, I sometimes get incredulous looks when I drink Campari neat. “How do you do that?”
Much different to the other two, which I also liked.

Back to Belgium then to complete the hat trick, Barry saving the best until last: The Rodenbach Gran Cru Sour red/brown at 6%, a blend of 1/3rd young beer and 2/3 of beer aged two years in large oak vats, giving fruity taste, complexity and intensity. Barry told us this Flemish Sour Ale has its own AOC. “It takes over two years to make (even the angel’s share happens here) and young beer is added to restart fermentation.” 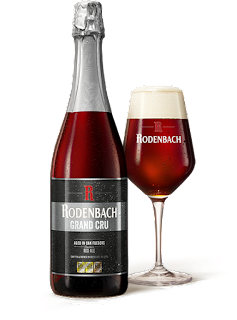 “It is more like a traditional beer, the flavours primarily from the oak cask and the wild yeast.” It was certainly more approachable than the previous one and went down really well in the group. Lots more info on it here.  By the way, the festival list also features another outstanding beer from this brewery, the Caractere.

Upstairs at the Franciscan Well is where’ll you’ll find Ireland’s first and only brewhouse cocktail bar. Dean was ready to shake but he was determined to respect the Rodenbach which would be the base for our cocktail. For instance, even the detail of garnish was given due consideration by Dean who put aside the normal basil in favour of sage, considering the basil too aromatic for the beer.

So, to 60ml of Rodenbach, the mixologist added Tobacco and Honey rum, lime juice, Bermuda rum, Cotes du Rhone red, and ice of course. It was a superb finale to an eye-opening session in the bar which is soon to be re-named and Dean and company are determined that the cocktails will reflect what goes on in the brewhouse, getting as many as possible of their ingredients from the beer-making process. Sounds like a good plan. Here’s to checking it out, with Barry of course, during festival #18 next year!
beer Belgium cocktails Festival Franciscan Well Norway UK