Sligo Cafés. Variety is the Spice

Vegan friendly dishes at the Sweet Beat in Bridge Street. A Naanwich and Leitrim roasted coffee at The Nook in rural Collooney. Chocolate and French Baking at Le Fournil in Tobergal Lane. Oysters and Prosecco at WB’s in Stephen Street. Just a few examples from the lively café scene in and around Sligo.

Growing up in Brittany, Clotilde (known in Sligo as Clo and I read somewhere her Friday doughnuts are Clonuts), saw just how important bread was in their lives so no big surprise that she and her partner Tomasz Giderewicz run Le Fournil bakery in Sligo. There is also a related Le Fournil in Donegal.

A sweet tooth led Clo to pastries and chocolate and indeed she won two Bronze at the recent Blas Awards. She has a fiercely loyal staff and they told me in no uncertain terms that it should have been two golds! We did, of course, leave “this little corner of France” with some chocolate. If Clo “wandered” in to Sligo, some of the other café owners here wandered out, for a spell.

Sligo Food Trails neatly sums up Carolanne Rushe of Sweet Beat. “The grass will never grow under Carolanne’s feet (though if it did, she’d probably turn it into a pesto)….. Going from running a market stall on her own to employing fifteen in Sweet Beat in just two short years, Carolanne is proving that plant based cuisine can taste great.” Coffee is pretty good there too as I found out on a brief visit to Bridge Street. 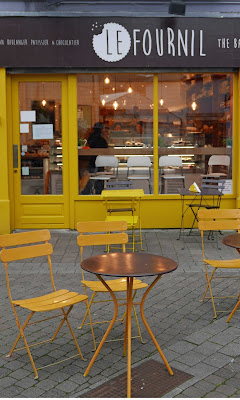 It seems that many in the Sligo food scene have been abroad (not just on holidays) and Carolanne is no exception. She’s been to the Middle East, Himalayas, Australia, South Africa. An extended course in Ballymaloe helped her bring all her food knowledge together and now Sweet Beat is a revelation, even for many committed meat eaters. She describes her plant based cuisine as “just food that’s good for you”.

Aisling Kelly is another Sligo “wanderer”, having spent many years on America's West Coast. Back in Ireland she became involved in the travel industry before returning home to Sligo to open WB’s in the old family pub. A larger than life statue of WB Yeats stands a few yards away.

She had learned much about coffee on the US West Coast and now makes sure that coffee culture is alive and well on Ireland’s West Coast. They also have an unusual offering. For under a tenner, you may enjoy a couple of local oysters and a glass of Prosecco.

Ethna Reynolds, of the Nook Cafe in Collooney village, is another who wandered out, not so much from Sligo, but from her native Leitrim. But the food bug had already struck through her part-time work in cafés in her student days. Several years travelling around Southeast Asia, Australia and New Zealand and working in different types of kitchens helped to further mould the budding chef.

And indeed those years led to the slightly exotic cuisine at The Nook where the best of local produce gets a Reynolds twist. The signature dish is perhaps the Naanwich. “We can change the menu and we do, but we can never take that one off,” one of the staff told us on our visit there for lunch.

CL picked that one. So what is the Naanwich?  A soft folded Naan bread with a Tandoori spiced mouth watering filling of Donegal buttermilk chicken, tikka mayo, house local veg pickle, local grown salad and slaw. A plateful of colour and flavour, altogether delicious, at a very reasonable price. 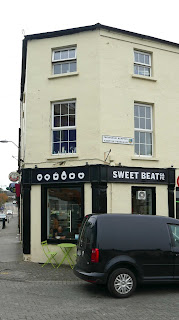 My pick was the Curry Roll and I was surprised by both the quantity and the quality! It’s a Tortilla wrap stuffed with curried roast chicken, Dozio’s Chilli Zing Cheese (from Mayo), Mango Chutney, Red Cabbage Slaw, Markree Farm herb tossed couscous, paprika fries. You’d have to be palate paralysed not to appreciate the flavours here. An amazing dish (€11.00) to find in a small rural village.

No wonder though that the new venture (May 2016) is well supported and already winning awards (including Georgina Campbell Newcomer of the Year 2017). By the way, they do breakfast here as well.

There are, of course, many other cafes in Sligo, and you may check them out here on this Sligo Food Trail list.

We had a great base in the Riverside Hotel, so conveniently situated for walking to the cafes, bars and restaurants in Sligo town. It has a marvellous location on the Garavogue River, at 50.7 kms, one of Ireland's shortest. The hotel overlooks the weir.

The lovely restaurant room, where you also take breakfast, takes full advantage of the location and you can enjoy the waters on two sides. As I say, a really convenient location and we were able to walk to bars such as the Swagman and Anderson's, cafes like WB's and Sweet Beat, and restaurants Rugatino and Embassy Steakhouse.