April 03, 2017
Cork’s Radisson BLU Hotel Reveals Luxurious New Ground Floor Revamp
Restaurant is renamed Maestro’s’
Had many an enjoyable evening in Little Island while growing up nearby but last Thursday's event in the Cork Radisson Blu, as they revealed its luxurious ground floor revamp and officially renamed the lovely new restaurant Maestro's, was rather unique.
There was a little nervousness among the Radisson crew early on but soon that dissipated as the guests began to enjoy the occasion. We were greeted warmly with champagne, wines and cocktails.

We were soon seated and the music added to the feel-good mood. The restaurant staff took the chance to show their paces and there were tables groaning with all kinds of goodies. Lots of them!

Elke O'Mahony recommended the chowder and she was spot-on! It was excellent, perhaps my favourite too. But then the dish alongside it, Salmon Chorizo risotto, also had its fans. Even the bangers and mash were high class. Indeed there was something for everyone, especially when those desserts appeared. Oh my! 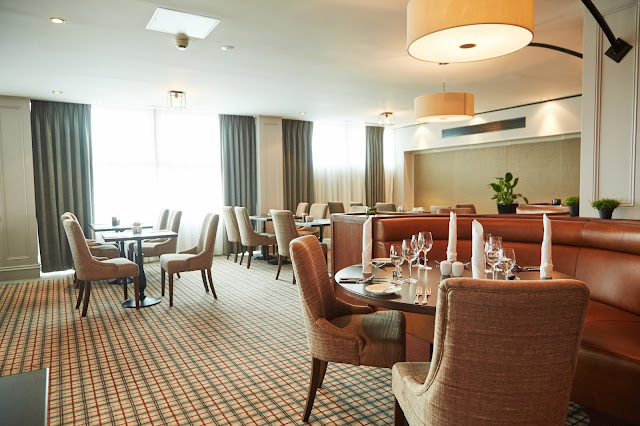 A few short speeches then from Shane Fitzpatrick, the hotel's General Manager and from Colette Walsh, Director of Sales & Marketing. Then it was time for fun and games and prizes galore to be won. The big prize was, of course, for renaming the beautiful new restaurant where we were seated.

The hotel ran a renaming contest on social media. Suggestions came through in their hundreds, with people offering names both on social media and at the hotel itself.
After weeks of deliberation, the team of judges decided to opt for a name that was put forward by a guest staying at the hotel. The successful entrant chose the title ‘Maestro’s’ and given that the restaurant is a finely-tuned machine that is operated with care and with a friendly but professional approach, the name seemed to be the perfect fit.

With the winner opting to stay anonymous, Shane, the  General Manager, decided that the amazing prize of dinner for two for a full year should go to a worthy cause. “We discussed how best to allocate the prize given the circumstances and it was unanimously agreed that it would be a well-deserved treat for the dedicated staff of Cork University Hospital,” Shane revealed. “They collectively do such great work and we would love to reward them in any way we can, so we will be offering the prize to them and we hope they will use it and enjoy it as they see fit!”

While he delighted in awarding such a hard-working team, Shane himself received a phenomenal accolade at the recent Shining Star Awards at the Park Inn by Radisson, Heathrow Airport. Fending off stiff competition in a category that included all GMs from Rezidor in the Western Europe region, comprising approximately 60 hotels, Shane scooped the title of ‘General Manager of the Year’. The prestigious award reflects his exceptional approach over the past 12 months to team building and development, customer service and financial excellence. 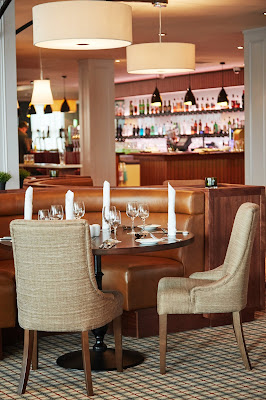 Speaking at the launch event, Colette Walsh, Director of Sales & Marketing, revealed Shane's win and paid tribute to her colleague’s amazing achievement and praised both his work ethic and motivational approach.

Also clearly delighted with the success of the hotel’s launch event, Colette said: “We are so thrilled with how successful our launch event has been and more so, we are ecstatic with the reaction of those who attended. Now that we have officially revealed our new look, we can’t wait to welcome both new and regular customers and to give them a taster of what the ‘new and improved’ Radisson BLU Cork has to offer. We are prouder than ever as a team to show off our beautiful hotel!”

The significant project, which incorporated The Great Island Ballroom, the chic hotel lobby, stylish Banks Bar and over 40 bedrooms, culminated in the complete revamp of the hotel’s restaurant. Now sophisticatedly adorned with plush carpets, mahogany furniture and brown leather booths, the restaurant is the cherry on top of the hotel’s brand new look.

Of course, I had to check out that stylish bar too. Having been in quite a few hotels who didn’t offer Irish craft drinks over the past week, I was delighted that the first thing I saw was the trio of taps for the Franciscan Well beers. Great to see this leading international chain supporting local and I drank to their future success with a delicious pint of Chieftain Pale Ale. Cheers Radisson! Here’s to many more years in Little Island.

For bookings and enquiries, visit  https://www.radissonhotels.com/en-us/hotels/radisson-blu-cork-spa or call 021 4297000