Powers to all our Friends. Cork Whiskey Fest at Sober Lane


Cork Whiskey Fest at Sober Lane
Great to meet up with the Powers Family at Sober Lane as part of the Cork Whiskey Festival. Powers Ambassador Michael Carr introduced us to Powers Gold Label, Three Swallow Release, Signature Release and John’s Lane Release, quite a stellar team from the venerable whiskey family.

Powers first made their mark on the Dublin whiskey as the 18th century closed and soon their concentration on quality saw them become the biggest in the capital.

Quality was always to the fore and it was because of concerns that the “brand” was being damaged that led to the founder’s grandson deciding to bottle their own, rather than have it bottled exclusively by middlemen or publicans. And this was where the gold label started; it indicated that the whiskey inside was bottled by the distillery.

That, by the way, was in 1866, about 100 years before Jameson bottled. Powers were always innovative and their release of the miniature bottle, the “Baby Powers”, was a world first. 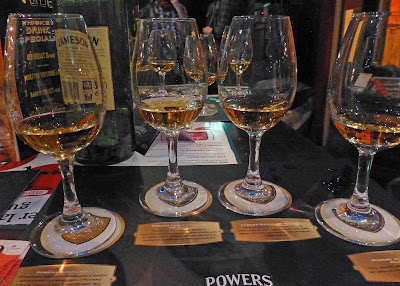 The current Gold Label was our first sip of the night. Michael advised “when smelling, keep mouth slightly open”. Spice, sweetness and oak and the barley of course all combine to make this whiskey a real pleasure.

By the 1880s, Power were very popular. They were great record keepers too and most of the old recipes survive and that made it easy for Irish Distillers in Midleton (where Powers is now produced) to recreate the old styles. The Three Swallows is triple distilled (like all Irish whiskeys) and is a relaxed and gentler whiskey, according to Michael. It is a true pot still style, smooth and complex, the intrinsic Irish style. The Swallows, by the way, are the whiskey equivalent of the stars on a brandy bottle.

Now we were moving on up to the Signature Release. “Very delicate on the nose… very active..zesty..on the palate..you know you're drinking whiskey”. It has a higher abv of 46%, “one of the reasons for that lovely zip on the tongue…we used only 2nd and 3rd fill bourbon barrels for this.”  He emphasised that this was regarded as a grown-ups whiskey, maybe even old-fashioned “but now becoming modern again!”. 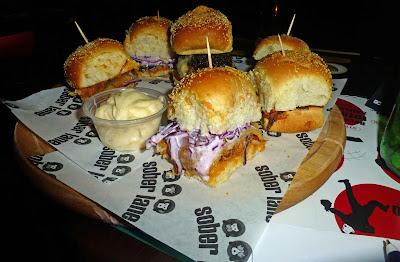 Then it was the turn of a favourite of mine, the John's Lane Release, “full bodied, spice upfront, followed by vanilla, honey and dried apricot”. John’s Lane is where the Powers Distillery was in Dublin and it was first made here by Barry Crockett in the 1970s. “This is a big whiskey, big on flavour. By the way, the 12 years refers to the youngest whiskey in the bottle.”

While the gold label is a blend, the other three are Single Pot Still Whiskey, Irish of course! Having done the talk, Michael showed he could walk the walk as he demonstrated his cocktail making skills by making an Old Fashioned. He had a one big tip. “In cocktails, don’t use your expensive whiskeys! Use the Gold Label. It has a lovely sweetness to balance the sours.”

Then there was an exodus to the smoking area to try out the Punch Cigars along with a 12 year old Powers Gold Label. I split with the smokes back in 1994. I did of course sample the whiskey, another family gem. Like the opening Gold Label, this is a blend with a good amount of pot still content and some very old whiskeys as well. Heard that it is going off the market in the near future so best to get your hands on a bottle or two before then.

Big thanks to Powers, to Michael, and to Dee and crew at Sober Lane. Not alone did we enjoy the whiskey but they came up with trays of delicious sliders as the enjoyable evening came to a close. Here’s to the next Cork Whiskey festival!
Cork Whiskey Festival Festival Cork Powers John's Lane Release Powers Whiskey Sober Lane whiskey