I visited the Kinsale Bay Food Company’s premises last week. With a name that includes Kinsale, you'd expect some fish products. And you won't be disappointed. But there are also lots of soups, chowders, patés, even Shepherd’s Pie and Cottage Pie. And all are Gluten Free.

GF is a growing market, and not just for coeliacs! According to a very recent report by Bord Bia, one in five Irish people are regular gluten free shoppers, though if you look at the accompanying infographic you’ll see that it is one in five shoppers. Even so, it is a massive number considering only 1% of the Irish population have been medically diagnosed with coeliac disease. 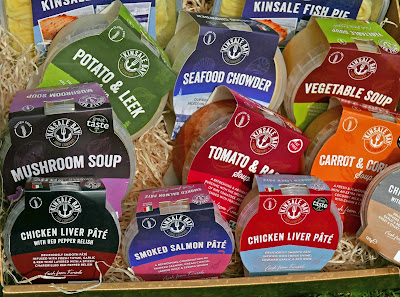 Thanks to Aoife Barry (Market and Area Manager, South-West), I visited the Kinsale Bay facility at Little Island and have been sampling the produce since and it seems to be that they didn't need to be tipped - they are already up to speed.

General Manager Tommy Doyle emphasised freshness. “We worked with local suppliers to get the freshest daily supply of quality ingredients… we don’t store here..by the end of the working day, there may be a half bucket left…Everything we sell is produced here.” Suppliers include Matt O’Connell Seafood, Keohane’s Seafood, Daly's Seafood while fruit and vegetables come from Allfresh Wholesale.

Then it is over to the chefs in the Kinsale Bay kitchens, who work in really modern facilities, streamlined from start to finish. There has been a lot of investment over the three years.

And they have developed recipes that are bursting with flavour and texture, which makes eating a gluten free diet an enjoyable dining experience. No artificial preservatives and additives are used thus ensuring the highest quality and wholesome taste. No compromise here.

Eleanor Downes, the Quality Manager, gave me a tour. Precautions are strict here but, booted and suited up, wristwatch off, nothing loose allowed, we started and there would be more changing and hand-washing as we moved from one unit to another.

Hygiene is paramount, lots of checks during and after production. “With the highest standard of diligence we ensure that no gluten containing products are on the production site, to eliminate risk of cross contamination.” And, while checking the ingredients, I was delighted to see no big confusing words in the lists! No mono-this or poly-that!

And so we moved through the various processes: soup production, chowder filling, regeneration process, blast chilling process, X-Ray (that’s why I left my watch and mobile in reception) and packaging, packing and storage and then dispatch.

The company, then called Blue Haven, started in 2008 selling in a small way at the Kinsale town market. Then they spread their wings, and awards (Great Taste and Blas na hEireann) came their way. About three years back, there was a change of ownership and Kinsale Bay Food Company emerged. 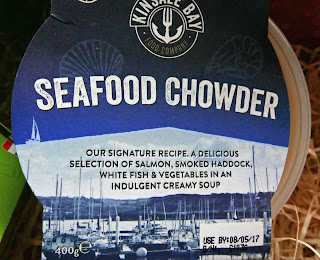 So, what will we start with? A soup perhaps. Quite a choice: Vegetable, Tomato and Basil (might be my favourite!), Carrot and Coriander, Mushroom, Potato and Leek. And the Chowder is excellent too.

Then move on to a paté. Can't wait to try the Smoked salmon. The Chicken liver comes three ways, all smooth, one is just chicken liver, the second with Red Pepper Relish, the third with onion marmalade.  By the way, the “jam” is pumped into the small container first, the paté added later; so no need to go and buy a separate relish as it’s included. Very convenient. Very tasty too. 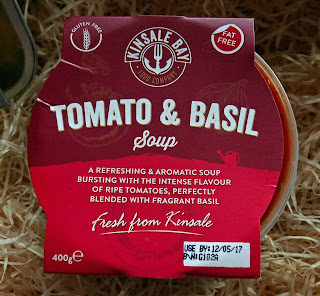 And now lets finish with the Kinsale Fish Pie, a dual award winning recipe based on fresh salmon, white fish, and smoked haddock chunks. Lots of good stuff there and they have recently added Shepherd's  Pie and Cottage Pie. New packaging and a new website on the way too so its all happening for Kinsale Bay.