February 03, 2016
Kelly’s Patch Wines
Victoria to Magherafelt
From way down in South-Eastern Australia comes the collection of very drinkable Kelly’s Patch wines. I came across them a year or so ago in Karwig’s and came across the team behind them at the recent Australia Day Tasting in the Royal Hibernian Academy in Dublin where Wine Australia showed over 200 wines to illustrate the diversity of wine in the vast country.

Cabroso Wines were showing the Kelly’s range and here we were delighted to meet up with Jonny Callan and Brian Shaw from the Irish end (they are based in Magherafelt, County Derry) and Matt Herde (see his short tasting videos via the links below) from the Australian end in Victoria. Brian himself was just back after no less than four years spent working and studying in the wine industry in Australia and New Zealand.

All their wines are single varietal. The whites are Kelly's Patch Sauvignon Blanc, Pinot Grigio and Chardonnay while the reds are Merlot and Shiraz. They also have a pair specially developed for the on licence trade, namely Kelly's Gang Shiraz and Kelly's Gang Sauvignon Blanc which you can watch out for in restaurants. 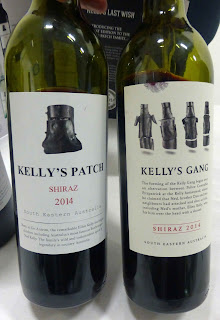 Took the opportunity to taste most of these in Dublin and they are very pleasant wines indeed, all easy drinking and all well priced at €11.99 for the off licence bottles. The Pinot Grigio is beautiful and fresh. The Sauvignon Blanc is fresh and vibrant with good tropical fruits.

The Merlot surprised me with its plummy spicy fruit, very concentrated with a lovely soft mouthfeel, a very nice drop indeed. The Kelly’s Patch Shiraz is also very good, warm and hearty, fruit-forward and enjoyable as Matt says here in this short video.


We later had the chance to taste two of the wines, including their star, the Kelly’s Last Wish Shiraz, at our leisure and the notes follow. 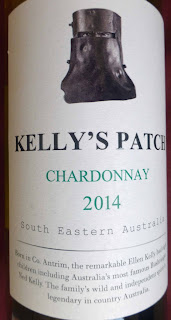 The fruit for this comes from Goulburn Valley where Chardonnay is the leading white grape. The aromas are an inviting mix, mainly fruity but with some floral elements. Colour is a bright medium gold with green tints. Importantly, oak use has been careful and applied to only a portion of the wine. Extended lees contact has enhanced the structure. There is indeed a refreshing balance of fruit and lively acidity and a very good finish to boot. Well made, good value and Highly Recommended.


Central Victoria is Shiraz country and the Last Wish, with its abundant succulent flavour and character is an excellent example. The fragrance of plums and the lift of spice are found in the attractive aromas and a palate full of concentrated fruit follows, oak too but really well integrated. With its tremendous fruit and spice, this is a complete wine, one that the winery say will keep for seven years. Not full on but nicely judged, as Hugh Johnson might say. Highly Recommended.
Just in case you haven't guessed it, Kelly's Patch is named after Ned Kelly,  an Australian bushranger of Irish descent. He was born in the British colony of Victoria as the third of eight children to an Irish convict from County Tipperary and an Australian mother with Irish parentage.

Kelly is one of Australia's greatest folk heroes, according to a government website. “He has been memorialised by painters, writers, musicians and filmmakers alike. More books, songs and websites have been written about Ned Kelly and the Kelly Gang than any other group of Australian historical figures.” Read more here.

Briefly, he was born in 1855 and hanged in 1880. His last wish was to be buried in consecrated ground but that didn't take place until 2013 when he was reinterred in Greta Cemetery in Victoria.