The diversity of Australian wines wasn't perhaps the most demanding of themes for the recent Australia Day Tasting in Dublin! There are some great choices already in Ireland and more coming our way, at all price levels. Australia has over sixty wine regions, so somewhere there is a terroir suitable for virtually every single grape variety and indeed almost all grape varieties are grown there; resulting wines can be single varietal or a blend.

We are moving on now to our second tour of the room in the Royal Hibernian Academy, the red route. All that after a chat with fellow wine scribe Richard Magnier who was enjoying the concentrated excellence available at the Focus Table for Chardonnay and Shiraz. Check Part 1 (the whites) here.

But before we get on to the well known Shiraz, I’d like to draw your attention to some less well known ones from Australia.  Wine Australia: “Winemakers and principals have been visiting the market throughout the year to promote the diversity of flavours and styles, regions and terroirs together with the food friendly, vibrant, evolving styles and emerging varieties.”

Food friendly and vibrant can easily be applied to the Merlot from Kelly’s Patch and shown by Jonny Callan of Cabroso Wines. McGuigan’s too have a Merlot in their Black Label series as have Yellow Tail while Wolf Blass has a Malbec. Penfolds have a Mataro (Mourvedre to you and me). 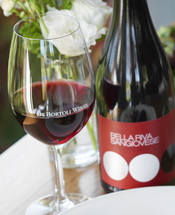 And if you like your Chianti it's entirely possible you'll like the De Bortoli Bella Riva Sangiovese 2013, from the King Valley in Victoria. Not too many Pinot Noirs on show but I did enjoy the De Bortoli Windy Peak 2013 from the Yarra Valley, superb flavour and balance here, even it's their third label.

Missed out on tasting one from Tasmania, an ideal area for the grape, but there was Tasmanian fruit (along with fruit from Victoria) in the excellent Hardy’s PRB Pinot Noir 2014.

No shortage of red wine blends in the tasting.  And one of the best was the Yalumba The Scribbler Cabernet Sauvignon and Shiraz (2012) from the Barossa, so well balanced, very quaffable indeed. All we were short was Jane Ferrari! Didn't quite get the same grá, at first sip, for the Peter Lehmann Clancy's Red (Shiraz, Merlot and Cabernet Sauvignon) - might need a second go!

And then, at the Findlaters table, there was 19 Crimes, named after the 19 listed crimes that made you a criminal in these parts and gave you a one way ticket to Australia. The “wine celebrates the rules they broke and the culture they built”.

And this intense flavoursome wine is quite a blend with Shiraz (57.1%), Cabernet Sauvignon (19.3%), Grenache (10%) and Merlot (6.4%) included. The Australians can blend a wine as good as any and can also tell the tales. Read about one of the “criminals” here, a Irish poet called John O’Reilly.

But tales and marketing can only bring you so far. The quality must be there and it is rarely lacking in Australian Cabernet Sauvignon and Shiraz. Let's start with the Cab Sauv and a lovely easy drinking one, again from the Findlater table, the Gentleman’s Collection 2014 from South Australia. For fifteen euro, this one ticks most of the boxes.

At Table 14 (Whelehan Wines), I asked for the Parker Coonawarra Estate Terra Rossa Cabernet 2013 (29.95). CL is a major Cabernet fan and thought she had struck gold. And it is a beauty - great balance structure and fruit.

But it would soon be eclipsed(!) by the Parker Coonawarra Estate First Growth 2010 (€85.00). This is produced only in seasons of exceptional fruit quality. It's made from predominantly Cabernet Sauvignon from their Abbey vineyard and some vintages, including this one, contain a small portion of Merlot and/or Petit Verdot. It is perfection. Best Cab Sauv I tasted for the afternoon!

Australia can boast much richer stocks of ancient Shiraz/Syrah vines than France. It was one of the country’s original varieties and many vines there are now well over 100 years old. While Shiraz (42,000 hectares) may well be Australia's signature variety (think Penfolds Grange), the style is ever-changing, from “classic full-bodied” to “delicate interpretations”.

“While Barossa may be the jewel in Australia's Shiraz crown”, quite a few other, often cooler, areas are also making their mark. Let's see what I got to taste in Dublin and, remember again, I didn't taste every example.

Kelly’s Patch, the vineyard with the Irish connection (not the only one!), had no less than three, headed by the award winning Kelly’s Last Wish 2014 (€19.99), from Central Victoria, really well-made, with fragrant aromas and a palate full of concentrated fruit and spice. The name comes from a story concerning the outlaw Ned Kelly's final wish, another tale on a bottle.

Peter Lehmann is famous for reds and, from a whole stable of Shiraz, my pick was the Futures 2011 (30.00), from the Barossa. Fruit and spice galore and an ABV of 14.5%. Most Australian Shiraz will be up around that, some even above.

D'Arenberg’s Dead Arm is their best known Shiraz but, with diversity in mind, I sampled the mid-range The Footbolt 2012  (€22.00) from the McLaren Vale. Another superb example with typical fruit and spice.

Hard to go wrong with Shiraz in this room. They just kept getting better. And Findlaters had quite a gem in the Wynns Coonawarra Estate Michael 2012, succulent, well integrated, well made with great length. The Shiraz Star of the Show?

That’s what I was thinking until I came to taste the Kangarilla Road The Devil’s Whiskers 2013 from the McLaren Vale. After that, I reckon the Best in Show title will have to be shared with Kevin and Helen O’Brien’s magnificent wine. Kevin was there himself: “It is consistent, ages beautifully. I tasted the 05/06 recently and it is beautiful vibrant, lovely.” This 2013 seems to be heading in the same delicious direction.

We have been missing the brilliant Kangarilla Road wines these past few years in Ireland. Kevin, like quite a few other Australian winemakers, came to the Dublin show searching for a distributor. Kangarilla, with so many superb wines in the range and popular in the UK, would be a fantastic addition to any portfolio here.

To learn a little more on Shiraz, check out this podcast.

To see Part 1 (on the white wines, mainly), please click here
Post also on the wines of Kelly's Patch here