Ended up with James Joyce in Dublin the week before last.

Just name-dropping, really. I was in the FX Buckley Steakhouse in Pembroke Street, another Dublin institution, and had just finished an exquisite steak dish. No room for dessert but certainly room and inclination for their James Joyce cocktail made with Powers Pot Still Whiskey, Triple Sec, Rosso Vermouth and lime juice.

Francis Xavier Buckley opened his first butcher shop on Moore Street in 1930 and this soon became a well-known Dublin institution. Since then it was part of a natural progression to open their own steakhouses around the city and serve their famous beef from their butchers to your table. You’ll find them in Pembroke St.,  Crow St.,  Ryan's Parkgate St.,  Bull & Castle (near Dublin Castle) and at The Pub @ FXB Monkstown.

With large glass-fronted fridges behind me, I thought my 8 ounce fillet looked a bit lonely on the plate with its little pot of pepper sauce (30.00). Of course, I could have had ordered a larger size or more sides than just their Beef Dripping Chips. But is was perfect. Exquisitely so. Tender and full of flavour and big enough too, a succulent sufficiency. And those chips. Must be the best around! 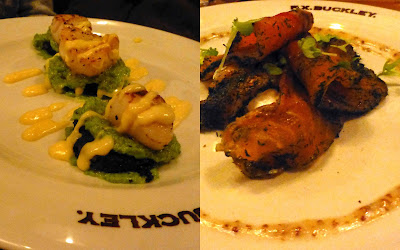 Meanwhile, CL was tucking into her Six ounce medallions of fillet beef, served with spring onion mash, shallots, mushroom and red wine jus (23.00). With all the steak dishes, you can order extra sides.

The Irish “grass-fed heritage steaks” are normally Angus or Hereford but from time to time, they may have Dexter or Irish Moiled meat available. All will have been aged for 28 days by the time they reach your plate.

The only steak that features on the A La Carte starter list is the Fillet Steak tartare. There are some great choices here including Black Pudding Croquette; Carlingford Lough Oysters; Asparagus, poached egg and Hollandaise; Foie Gras and Duck liver Paté. 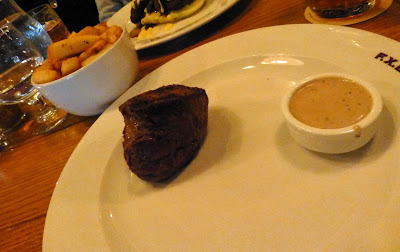 CL was delighted with her Kilkeel Harbour Scallops, served with a Buckley black-pudding, with crushed mint peas and hollandais (13.50). A terrific combination with, surprisingly, the peas playing a starring role.

My choice was the FX Buckley cured salmon blini, with chive crème fraîche and mustard honey dressing (9.50). Went through that one fairly quickly, I can tell you, very tasty indeed.

What to drink? We had been at a wine-tasting that afternoon so settled on beer in Buckley’s. The fact that they have their own ale helped. It was a nice one too though I preferred the large bottle of O’Hara’s Pale Ale. By the way, there is no shortage of wine here. It is a massive list with the reds in the majority, some very expensive, some very affordable.

And no shortage of cocktails either. When it came to making up my mind, I decided to stick with the locals and Mr Joyce. And I enjoyed his company very much indeed. 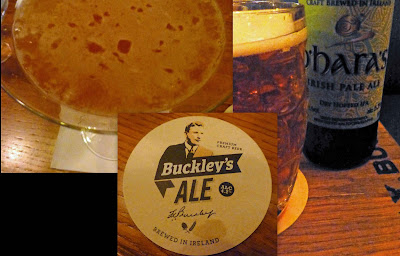