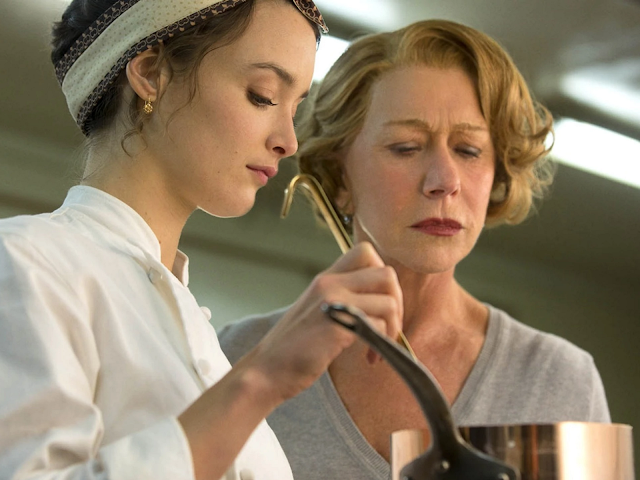 This nationally acclaimed festival, supported by the Arts Council, Cork City Council, and worldwide leader in gastronomy Le Cordon Bleu, screens the best of French feature films, documentaries, shorts, and retrospectives. The week-long event is the ideal time to savour the best in French cinema while enjoying the unique French ambiance that the festival brings to Cork.

This edition puts a huge emphasis on the enduring link between food and cinema, taking you on a culinary journey for supper at the English Market, inspired by the classical and world-acclaimed film Babette’s Feast, and to a sumptuous candlelit dinner at Ballymaloe bursting with the flavor of Helen Mirren’s kitchen in The Hundred Foot Journey.

The festival will also create unmissable culinary moments in collaboration with Le Cordon Bleu (London) at the English Market and CIT, with internationally acclaimed Master Chef, Loic Malfait, giving a food demonstration, tastings, Q&A and a hosting a wine discussion.

To ensure a lively festival atmosphere throughout the week, the amazingly encyclopedic raconteur Christophe Rohr will entertain guests at the Festival Club in Arthur Mayne’s and Café Francais at Lafayette’s in the Imperial Hotel.

THE CORK FRENCH FILM FESTIVAL
FOOD PROGRAMME AT A GLANCE:

A CULINARY CONTRIBUTION TO THE CONSERVATION OF THE ART OF FRENCH LIVING
A culinary demonstration with Le Cordon Bleu Master Chef, Loic Malfait,
using local ingredients from the English Market.
Tuesday 8th of March at 7.00pm
CIT Department of Tourism and Hospitality (Demonstration Theatre)

The world’s leading Culinary Arts, Wine and Management school, Le Cordon Bleu, have been committed to providing the most prestigious culinary education for over 120 years, and during its time has made a worldwide contribution to the conservation of the art of French Living by setting standards in the culinary arts and hospitality industry

Le Cordon Bleu training remains prestigious with its industry relevant courses, state-of-the-art facilities, its dedication to classical French techniques and high calibre Master Chefs and wine experts. The school, which celebrated its 120th Anniversary last October, has evolved from a small Parisian cookery school to an ever expanding international network, training over 20,000 students every year.

The Cork French Film Festival is delighted to welcome Le Cordon Bleu whose Master Chef, Loic Malfait, will put on array of interactive culinary events including a demonstration on the 8th of March in CIT Department of Tourism and Hospitality sourcing local produce from the English Market, and a unique experience on food and wine pairing on the 9th of March at the Farmgate in the English Market. A photographic exhibition by Le Cordon Bleu will run at Alliance Francaise de Cork Galerie, from 23rd February to 31st March

Released in 1987, Babette’s Feast is a film which depicts so little yet says so much. Set in a rural Danish Community, it centres around the village pastor’s twin sister and the French woman, Babette, who serves them after fleeing the 1871 revolution. On winning the lottery, she plans a feast to make the centenary of the sisters’ father, bringing a dimension of fine living into the lives of the God-fearing Lutherans and healing festering personal animosities in the process. Director, Gabriel Axel, captures the rugged timelessness, and the Jutland landscape, and draws inspired performances from Stéphane Audran as Babette, and Bodil Keyer and Birgitte Federspiel as the sisters Filippa and Martine. Per Norgard’s sparse but affecting score captures the mood of the film perfectly. Altogether it’s a heart-warming and sensory experience.

THE HUNDRED-FOOT JOURNEY
A four course Candlelit Supper inspired by cuisine from the film.
Thursday, 10th of March, 6.30pm, at the Ballymaloe Grainstore.
Price €55 for supper and screening / €10 for screening only (at 8.30pm).

Set in the bucolic South of France, this stunning film starring Helen Mirren centres on culinary whiz Hassan, whose father opens a curry house across the street from a celebrated French restaurant, owned by Madame Mallory (Helen Mirren). Food and culture wars ensue as the two restaurants fight for customers and prestige.

Produced by Steven Spielberg and Oprah Winfrey, the film is much more than an amuse-bouche: it’s a hearty meal, delicately presented as the dishes in Madame Mallory’s Michelin-starred establishment, with Helen Mirren wonderful as he grande dame of French Cuisine.

Shot in luminous, sun-dappled tones in the French village of Saint-Antonin-Noble-Val, the Hundred-Foot Journey is a charming, handsome, and well-acted dramedy that the whole family can enjoy.