Up and Running!
The Munster Wine & Dine Circle is up and rolling. A full house at Jacques saw the 2016 launch in midweek. Lots of chat and information for the year ahead while Ummera Smoked and Stonewell Cider were the opening night stars. And of course, the kitchen at Jacques also played a blinder.

Munster Wine & Dine is a bunch of like-minded people, eager to taste the best the region has to offer and also to see how food and drink is produced. Last year, breweries, cider-makers, cheese-makers, gin producers, a smokery, and various restaurants (including Farmgate, The Tannery and Longueville House) were visited. And the coming twelve months should see something similar in the programme.

Last Wednesday though was the first step and here, Anthony Cresswell of Ummera and his brother-in-law Daniel Emerson of Stonewell told us about their enterprises. And they had some surprises in store.
We were each handed a glass of bubbles as we arrived and who doesn't love Prosecco! And some of us were fooled. This wasn't Prosecco at all but a sparkling cider called Esterre. Made exclusively from the beautiful Elstar Apple (grown in Tipperary and Waterford), Esterre is a sparkling cider "with reflections of a sparkling wine".  This is dry, really dry, is clean and crisp in the mouth with tart elements of the orchard and citrus notes and a smooth finish.

The first of our five courses soon appeared: Ummera Smoked Salmon with horseradish cream and beetroot relish. Delicious. Ummera is the only Irish smokery licenced to do both fish and meat. Smoked Chicken is always a favourite in this house and it was outstanding in Jacques with baby gem, pickled fennel and orange and was accompanied by Stonewell Dry Cider (the one that bites back, according to Daniel).

Then it was the turn of the Medium Dry Cider in a dual role. It accompanied the marvellous smoked duck served with a Kale crisp, a hazelnut salsa and a jelly made from the cider! Great match.


The same cider also accompanied the next dish: Smoked bacon potato cake, crispy bacon, mustard cream and glazed apple. These Ummera rashers are amazing, perhaps the best around. And appreciated not just in Ireland. Anthony told us that a restaurant near the Spanish Steps in Rome is a regular customer. So if you get a great smell of rashers next time you visit the fountain there, then you know where it originally came from.

And the brothers-in-law had another surprise for us at the end. At least Daniel had. The cheese plate, with Knocklara and Durrus, was accompanied by a classy Tawny made by Stonewell from the fermented juice of Michelin and Dabinett apples and “elaborated with El Dorado dry hops”.  It keeps well and has an abv of 15%. It is described as “an opulent complex cider with chewy tannins and hints of fruit. Delightful as a slightly chilled aperitif but equally as a cheese or dessert accompaniment”. No arguing with that in Jacques last night.

Many of those present joined Munster Wine & Dine on the night and we are all looking forward to the events ahead. If you’d like to join, please contact the secretary at iwfsmunster@gmail.com. Below you’ll find a leaflet that was handed out at the launch and it gives a good idea of what you’ll be getting into! 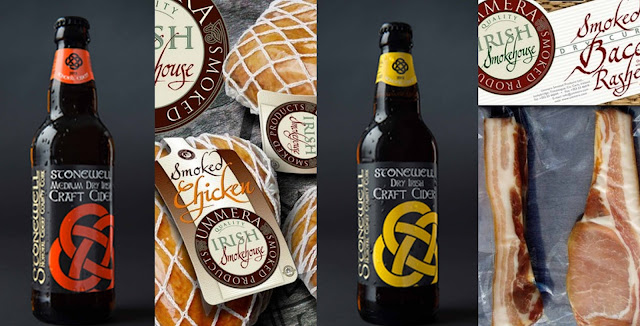 We usually have something in the Spring. Last year we had a Beer versus Wine fight in L’Atitude. Don’t worry, no bottles or blows thrown. This year the plan is to get one or more of the new distilleries in to give a tasting. That will probably be in March or April.

Once the extra daylight comes in, we usually do a short evening trip to a local producer. Last year, we had a great time at Frank Hederman. This year, we’re talking to a local coffee roaster Golden Bean and hoping to get a local bean to bar chocolatier visit the roastery at the same time.

In the summer, we usually have a field trip. Away for the day and much of the night too. Last year was outstanding with a call to the Fermoy Natural Cheese farm, a visit to Dungarvan Brewing, a gin tasting and a fantastic meal at The Tannery. The likely one this time is being set up to include a visit to Cashel Blue cheese, the Apple Farm in Cahir, hopefully with the fruit trees in blossom and cider available, and a wine-tasting and dinner at Ballinwillin House.

We usually have two events in the Autumn. The highlight last time was a visit to Longueville House. A tour of the orchards (harvesting was in progress), then we saw the cidrerie and the distillery and there was lots of tasting, back then to the house to be greeted with mugs of mulled cider before settling into a great lunch, with wine and more apple brandy. And then a long snoozy session in front of the open fire before the bus came to bring us back. We’ll have to work hard to replicate that one! But we are working on a few ideas.

We also had an Italian night in the Farmgate. We may do something like that again as there are quite a few international chefs now working in the Cork area. It also depends a bit on how many new members we can attract. And we’re hoping to attract more as word of the massive reduction in the annual fee gets around.

You can see there is something in the provisional list for everyone. And we are open to suggestions. You can also see that there is plenty of variety each year. If you like good food, good drink, good company and a good time, you've come to the right place.
2012 Cider Jacques Munster Wine & Dine Circle smokery Stonewell Ummera