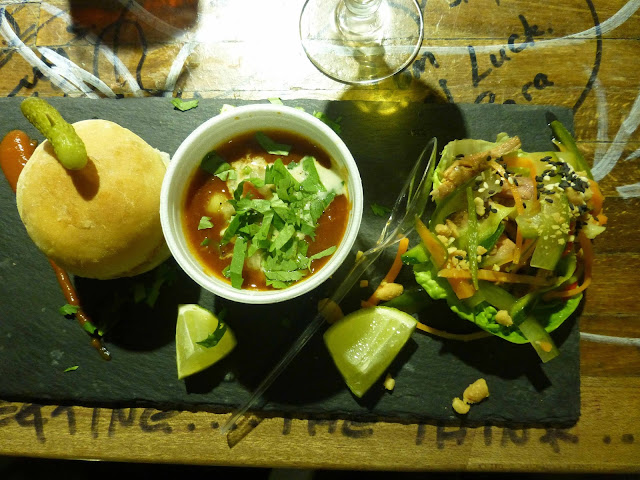 
The Urban Jungle, with its barber, its tattoo parlour, its graffiti, its painted car bonnets and hanging skateboards, its ping-pong and football tables, is hardly a fine dining venue. Well, not fine dining as it’s generally known. But Bryan and Mike, the guys that make up The Sharp Knife, are determined to make their mark on the new dining scene. These gourmet guerrillas pop-up and you pop-in and enjoy very fine food indeed.

The Plate (for a tenner):

The Naked Piggy - The Woodside Farm pork shoulder is smoked on the bone for 14 hours, low and slow. Not a pinch of seasoning is used.. no salt, no pepper...NADA. So when we say naked, we mean NAKED.. After 14 hours the meat is pulled and mixed with a light organic apple cider vinaigrette and served on a toasted mini slider. That’s it..Pure Pork Heaven.

El Salvador - Translated to ‘The Saviour’, this rich intense pork stew is everything you need in life. Topped with sour cream, pineapple pico de gallo and fresh coriander. Once you try this stew, you’ll understand why it had to be called..’El Salvador’.

The Beast from the East - Our gorgeous belly of pork marinated for at least two days in a mix of Asian spices and herbs. It’s then smoked low and slow for at least 6 hours and finished at the end with a rich sticky glaze. Served in a lettuce cup, with toasted sesame seeds, crushed peanuts, Vietnamese style pickle and fresh herbs. A light and flavoursome dish, teasing the senses on all levels.
The Verdict
Not alone can these guys talk the talk, they can indeed walk the walk.

We are very familiar with the Woodside shoulder so had a good idea of what was coming with the Naked Piggy. Amazing delicious pork that spoke of the clean farm in East Cork from whence it came. Pure Pork Heaven is not an exaggeration.

And, after that El Salvador, we were ready for a night in the Urban Jungle. This amazingly flavoursome stew would revive you even after a trek in the jungle, equally so after a hard day at the desk or on the tractor! 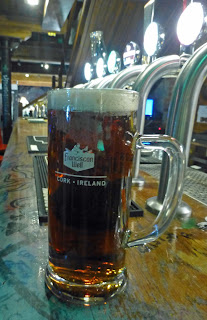 A few years ago in the Loire, we came across a Vietnamese food truck and we kept returning there during the holiday. After sampling the Beast from the East, I reckon The Sharp Knife duo could well do something similar. This had all the characteristics of an light and flavoursome Asian dish, right down to the crunch of the vegetables and the lettuce cup. Teasing the senses on all levels? Yes indeed, teasing and ultimately very satisfying.

A terrific trio by a terrific trio (the two chefs are helped by Roisin out front). Great ingredients, expertly handled and cooked, and all washed down with a warming glass of mulled cider (with a pint of Rebel Red from the bar as reserve!).

Indeed, a recent Sharp Knive pop-up involved Franciscan Well beers and beef and that, at the North Mall, was also a success. Watch out for their next event. Find them on Facebook and on Twitter @sharpknifecork. They also do the food for the market in Urban Jungle (last Sunday of every month).
Franciscan Well The Sharp Knife Urban Jungle Woodside