Albarino. Wine of the Celtic Fringe and the Spanish King.

January 06, 2016
Albariño. Wine of the Celtic Fringe and the Spanish King.

Albariño, from the green lands of Galicia, has become a very popular wine in recent years. Across the River Mino, the Portuguese call it Alvarinho and use it as the major component (sometimes the only grape) in Vinho Verde.

The Rias Baixas wine region of Galicia, where the indented coastline is a major feature of this Celtic fringe of Spain, is the home of Albariño, and there are a number of sub zones. Condado do Tea is the warmest and this is where the Senorio de Rubios comes from, while the Segrel and the Codax are from the cooler and wetter Val do Salnes. O Rosal is another sub zone, to the south west. Here, you could do worse than look out for Terras Gauda.
I was lucky enough to win three of the wines below (the Codax is the exception) in a pre-Christmas online competition run by Food and Wine from Spain (Ireland) and they invited me to drink like a king! The King of Spain chose Albariño wines to celebrate his marriage.

With its aromas of honeysuckle, citrus, ripe melon, peach, pear, among other exotic fruits, it is the perfect drink to enjoy with friends during the summer. But not bad in the middle of winter either, as I found out these past few days.

It pairs well with a wide range of cuisines and Food and Wine from Spain tell me it “works fantastically with Indian, Asian and Mexican food”.

“The hand picked grapes that go into Albariño wines are carefully tended to by the winemakers in Rias Baixas. Over half these winemakers are women, representing the highest figure of female producers in any wine producing region.”

Finest Wines of Rioja (2011) debunked a popular misconception that these wines are meant to be drunk within one year of the vintage. “..a quality Albariño, bottled during the the first spring after harvest, with a balanced structure relying on fresh acidity and  a good mineral character, will be at its best after its second spring and will continue growing in bottle for some years.”

In Grapes and Wines (Oz Clarke & Margaret Rand), Albariño is hailed as the grape that “brings flavour in bucketfuls to the white wines of northwestern Iberia”. And they go on to tell us that Albariño is “by far Spain’s most fashionable white variety, particularly when grown in Rias Baixas..”

The coastal landscape is neatly summed up in the World Atlas of Wine: “..the landscape is exceptional for Spain: irregular Atlantic inlets called rías, which are effectively shallow fjords, lined with hills that are densely forested with local pine and rapacious eucalyptus imported in the 1950s.” The green Spain.

Bright gold in colour, it has intense aromas (fruity, floral, and definity herbaceous). It is not shy on the palate either. The intense fruit is immediately obvious as is its viscosity. That fruit though is well balanced by the acidity and then it also has a superb elegant finish. A super Albariño and Very Highly Recommended. If you like a “bold” wine go for this one, if you prefer something more restrained then try the Mario Sanzo. You might need to try both to be sure!
Segrel is the name given to a travelling medieval poet and this wine, in its Burgundy bottle, is indeed harmonious, a most pleasant balance of flavour and acidity. May have the edge on the Senorio de Rubios. 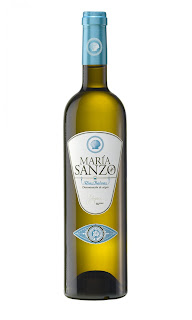 Bright in the glass with a pale gold colour. Similar to the Segrel Ambar even if not quite as intense, it has a very pleasant aroma combination of fruit, floral and herbaceous notes. Viscosity feels a bit above average. Full bodied, mineral and fruity, with a stronger acidity at play here, perhaps reflecting the proximity of the vineyard to the bracing Atlantic. Overall, it is very well balanced indeed, a very refreshing wine, restrained and refined and Very Highly Recommended.

Sanzo are hardly a typical Rias Baixas producer in that they produce wines all across Spain, even in Portugal.

Señorío De Rubiós Albariño 2013, 12.5%,
Got off to a poor start with this one!
My three bottles were accompanied by a Spanish cows milk cheese, called Tetella, and I paired the two, thinking that since both were from Galicia, they would match well. I thought I was on a winner but it didn't work. Not a win, win! Just the opposite.

Yet, a quick separation later and I had two winners. The unusually shaped cheese is mild and pleasant to eat. It can be enclosed in the local roasted peppers (there was a jar in the hamper!) or used with a little bit of relish (such as the redcurrant and port wine by Lakeshore).

The wine, with its healthy looking light gold colour (tints of green there too), was superb on its own. It has attractive aromas with both floral and fruit elements. On the palate it is fresh, full of white fruit flavours, terrific structure and viscosity and a long dry minerally finish. Excellent and Highly Recommended.
Seen this at €16.99 online at the Black Pig Dublin 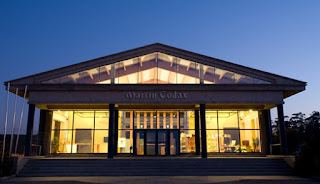 Martin Codax Albariño 2013, 12.5%, €16.70 Karwig Wines
A lovely light gold is the colour here. Aromas are intense, not quite as much as the Segrel though the same elements - floral, fruity, herbaceous - are all present. No shortage of citrus-y fruits on the palate, quite a bracing acidity here and then that long minerally finish. Ideal for those Atlantic shellfish and Highly Recommended.

Below, I have added the winery’s tasting notes. Do you like the names of their three steps?

"The Martin Codax winery, named after one of the most important medieval Galician troubadours, was founded in 1986 thanks to the idea of a group of winegrowers; as a winery made by people for the people. Set up by 270 members, the winery also relies on the collaboration of 300 families whose grapes are supplied to us. As a big family, we work together in order to ensure our wines have the highest possible quality."