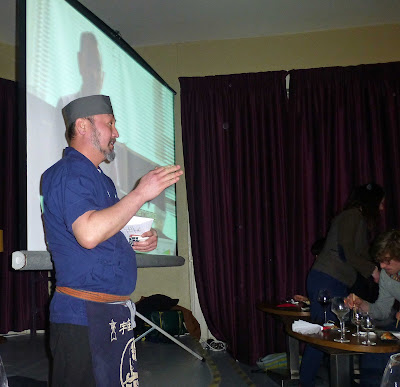 L’Atitude’s CineCafé started its 2016 run with the enthralling Japanese film Jiro Dreams of Sushi (2011), the story of an 85 year old chef who runs a 10 seat three star Michelin sushi restaurant in a Tokyo subway station. Not alone do L’Atitude entertain you, they also feed you and, for this occasion, local Japanese chef Takashi Miyazaki was on hand to do matching food, a small plate of big delights.

And that wasn't the end of it - remember all this for 15 euro. We had an opening wee glass of an Italian natural wine from Piemonte, a drop of Saké at halftime and a drop of Shōchū, a distilled version, for the road. Quite a night and the next CineCafé event, a sherry based one, is due on the third Wednesday of February. The upstairs room, decorated on this occasion with origami by Celine, is ideal for these events.

The film's blurb says: At the heart of this story is Jiro's relationship with his eldest son Yoshikazu, the worthy heir to Jiro's legacy, who is unable to live up to his full potential in his father's shadow. We didn't really see that much tension between the two, on the contrary.

Sushi lovers from around the globe make repeated pilgrimage, calling months in advance and shelling out top dollar for a coveted seat at Jiro's sushi bar. But often your 21 course (bite!) meal is over in 15 minutes. Jiro puts your piece on your slate and you eat it immediately!

Not so quick though if you’re an apprentice here. Your training could take ten years! Then, one day, you are told you've made it. Not all hopefuls last the pace - some pack it on after one day. 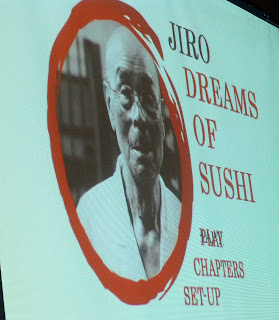 One of the jobs for the newcomers is to massage the Octopus. In the early days, this was a 30 minute stint but Jiro has increased it to 45.He is always trying to improve his sushi, thus the long massage. And a tip for Irish sushi imitators. Serve your rice at room temperature, not cold!

He is the undoubted master in Japan and son Yoshikazu buys the best fish available in the market. That market is huge, the tuna lined up like battalions. And you wonder how long more that particular fish will last if so many are needed every single morning for this part of the city alone. Yoshikazu is also anxious about the future supply.
For all his fame and his insistence that a good palate is essential to being a chef, Jiro is a humble man, humble enough to acknowledge that the best palate he has come across belongs to the famous French chef Joël Robuchon.
I won’t tell you too much about it as the film is easily found on the internet and this is one link where you can see it in its entirety.
Miyazaki, who has been getting great praise for his little restaurant/takeaway of the same name, was introduced at the start and his plateful came during the interval. He explained that, since we were in a wine bar, he used red wine with the duck and it was delicious. So too was the prawn - “the head is the best part” - and the salmon sushi and the sea bass sushi were also delightful.

You can see Takashi in action in his kitchen in Miyazaki which is on Evergreen Street, at its junction with Barrack Street. You can also have his food at home, thanks to Deliveroo, but it's great to get in there and get one of the six or seven high stools! I’ve been there a few times and my first vist is recalled here.
Just like Takashi, I too succumbed to being in a wine bar and sampled a few from L’Atitude's amazing list, dozens of terrific wines available in many options, from a small tasting glass to the full bottle.
I started with the Forrest Pinot Noir (Marlborough, New Zealand), elegant and altogether excellent, €5.70 for a 125ml glass. My companions were enjoying the Palacio de Bornos Verdejo (Rueda, Spain) and I was allowed a few sips of this and found it smooth and fresh with loads of fruit.
And we finished the night drinking a lovely Madregale bianco, a blend of  60% Trebbiano d’Abruzzo and 40% Chardonnay (from Abruzzo), simple and refreshing but with inviting aromas and no shortage of equally pleasing fruit flavors (4.20 a glass). And the good news is that they also do a red, both available here at L’Atitude. Importer Pascal Rossignol of Le Caveau (he also enjoyed the evening) tells me that they are becoming quite popular as house wines. Not surprised.
There’s a lot going on in L’Atitude: wine courses, tastings, films, music and wine and food of course. Check it all out here or just call in to Number 1, Union Quay, Cork, across the road from the City Hall, across the river from the Clarion Hotel.
CineCafé Jiro Dreams of Sushi L'Atitude 51 Le Caveau Miyazaki sushi Wine