New Stalls at Midleton Farmers Market. Getting Better all the time

August 20, 2015
New Stalls at Midleton Farmers Market
Getting Better all the time

Midleton Farmers Market, the original farmers market, was founded fifteen ago by Darina Allen and local farmers and has gone from strength to strength. Hard to get a stall there now but there were some newcomers last Saturday when I visited.

Space is limited but vacancies occur from time to time, particularly when a successful producer (Cobh’s Just Food, for example) outgrows the stall.

So now you may buy BBQ Jerk Chicken from Le Kiosk, vegetarian from Buddha Bites, coffee from Doppio, also doughnuts and ice cream from another stall. Check out the list of stallholders here, even if it is a little out of date!
Originals such as Woodside Farm, Frank Hedderman, and Ballymaloe are still very active here, side by side with more recent arrivals such as Jason Carroll’s Loving Salads and the Lobster Man. The Lobster Man has live lobsters and crabs, and sometimes brings a giant example. Do watch out for him. And watch out too for Jason who is due to open a cafe in Academy Street.

By the way, Hederman and Arbutus Breads are in the running for the Irish Times Best Market Stall. Best of luck folks.

Like all farmers markets, the atmosphere here is relaxed. Do your shopping, have a chat with stall-holders such as Barry Tyner (he sells fantastic patés) and Deirdre (she'll tell you all about the Arbutus range). Jane from Ardsallagh Goat Cheese always has something interesting to chat about, especially in the food line. Indeed, what you find is all the producers have time to talk to their customers and are very enthusiastic about the market in general and keen to spread the word.

Then take a break, have a cup of coffee and listen to the music. It is a terrific way to spend a Saturday morning and you’ll have excellent produce in your bags and enough of it to keep you going over the weekend. 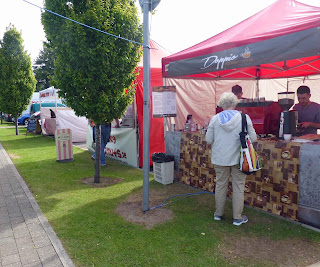 Midleton celebrated its 15th anniversary last May and here’s what stall holder Ballymaloe Cookery School wrote then:  It has been an outlet not only for the many artisan producers of the area, but also for high profile food producers that have had stalls at Midleton Farmers Market, including Clodagh McKenna, Darina Allen, Arun Kapil of Green Saffron Masaalchi and Frank Hederman of Belvelly Smokehouse. The market has also been featured in many TV shows, including the Ear to the Ground, Nationwide (Irish TV series), Rick Stein's Ireland and @Clodagh's Food Trails which has seen by viewers across the States and Australia as well as the UK and mainland Europe, helping position Ireland, and indeed Cork, as a major food destination.