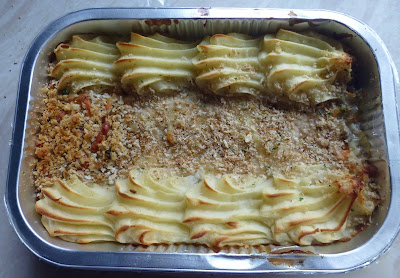 I am eating a Fish Pie, a simple fish pie. It contains Whitefish, Smoked Fish, Salmon, Milk, Onions, Butter, Flour, Potatoes, Seasoning, Breadcrumbs, Cheese. Nothing exotic. Nothing than I can’t spell. No preservatives, no artificial colourants. Mainly it contains fish. It has been baked in the oven for 25 minutes and a bunch of broccoli has been added to the plate. Simple stuff but simply superb.

I’ve also been sampling fish cakes and they too are excellent, easy to prepare and easy to eat! The cakes and the pie are encouraging signs that Irish fishermen are taking more control of their own destiny. They’ve been produced in Rosscarbery by Fish Seafood Deli and much of that fish has come from their boats.

Ex fisherman Peter Shanahan founded the business in 2011 when he opened a retail shop in Rosscarbery. Since then he has been joined by Monica Buckley and her husband Niall Deasy. Niall operates fishing trawlers out of Union Hall port, fishing for prawns and whitefish primarily. And the business has expanded.

Many of you travelling in the area will be glad to see one of their outlets, the Fish Basket in Rosscarbery, on the main road west of the Celtic Ross Hotel. This is a busy spot and yes fish and chips is the most popular buy. But you can also get a prawn sandwich here, maybe a crab salad. 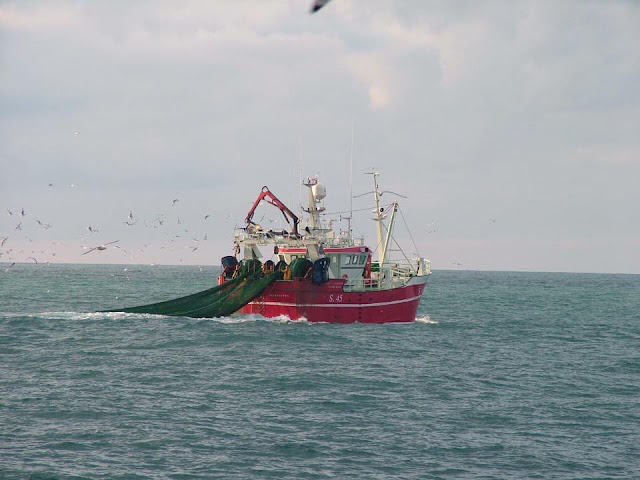 Fish Seafood Deli now employ 15 staff, between :
2 Retail premises (Rosscarbery and Clonakilty);
2 mobile units serving the  Cork area;
Wholesale business supplying Hotels & Restaurants with fish directly from the fishing boats of Union Hall/Baltimore & Kinsale;
2 full time chefs producing cooked products e.g fish cakes, fish pies, Prawn Cocktail, seafood quiches, breads.
Fish Basket located at Newtown, Rosscarbery,  serving fish and chips and specials such as crab & prawn parcels with pineapple salsa.
Monica tells me the mobile units have regular spots they sell at. “For example one of the units is in Whitechurch and Carrignavar each Monday. They would have different towns they go to every day of the week.  The mobile units sell fresh fish and also a selection of our cooked seafood range.”

The retail shops each have a wet area where you can buy the freshest of fish. The Rosscarbery one is just east of the village, located next to Ryan’s Service Station, on the main road to Clonakilty. We got some cod there for dinner last Saturday night and it was just first class, the flesh pristine on the plate. 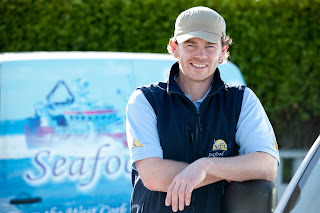 You can also buy the cooked seafood range here. Indeed, the company’s kitchens are here. The Clonakilty shop does both fresh and cooked and is in Ashe Street.

Peter spent almost three years working in Glenmar fish factory in Skibbereen before training as a carpenter. But it wasn't the best of times to be in the construction industry. Following the collapse of the Tiger and two P45s in quick succession, he returned to the fish industry and spent several seasons on prawn and tuna trawlers.


The idea of opening a fish shop had been in his mind for a while and became a reality in July 2011, when he opened the doors to Fish Seafood Deli just outside his home town of Rosscarbery.

“I feel that in an ever-increasing health-conscious society that fresh fish is something that people are going to want more and more of. I also believe that West Cork has some of the finest seafood in the country!  And if you don’t believe me – call into our shop and see for yourself!”

I think we’ll be hearing more from Fish Seafood Deli! 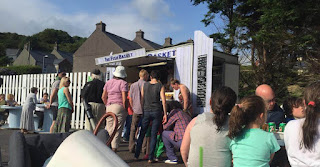