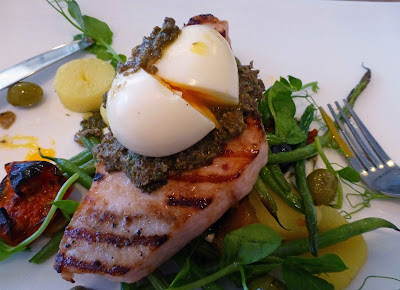 It was seafood all the way at the new Seafood Cafe in the Blue Haven last week. And why not? After all we were on the Wild Atlantic Way. Not that there much wild about it on one of the best days of the summer. Naturally enough, by the time we arrived after a noon cruise around the harbour, the sunny outside seats were taken and we were accommodated inside. No hardship there.

Both the starters came from nearby Oysterhaven. Jamie’s Oysterhaven Mussels, a big pot of them for €9.95, were served with a garlic, white wine, parsley and cream (lots of it) sauce and garlic crostini. Very tasty. 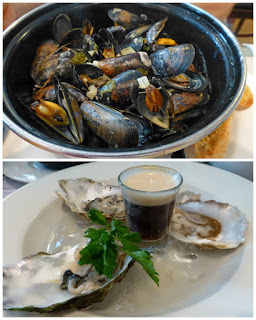 For €6.95, I got the oddly titled Quarter Dozen Oysterhaven Oysters, served on crushed ice, with a Guinness shot, lemon, and seaweed soda bread. The Oysters, all three of them,  were top notch, a taste of the Atlantic for sure.

By the way, my server suggested Carlsberg and Heineken when I asked for craft beer but a few friendly words later and I was sipping a delicious local pale ale from Black’s Brewery. Indeed, they have a bunch of craft beers here and also that gorgeous local cider by Stonewell. 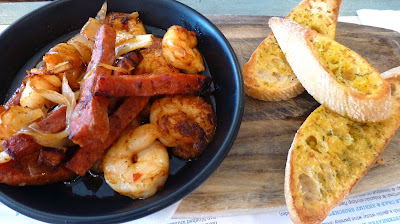 CL was happy too with her Jamie's Claypot King Prawns and Gubbeen Chorizo, with chilli and garlic butter, shallots, parsley and served with garlic crostini. Another good flavoursome mix here for €12.95.