In Argentina. Malbec Reigns In The High Vineyards.


In The High Vineyards.

Argentina, the world’s fifth biggest wine producer (World Atlas of Wine) and well known for its high altitude vineyards (the highest in Salta at over 2,700m), took its time before making its mark on the world stage. Quality, as it is so often, was the key to the breakthrough in recent decades and their Malbec gained a huge reputation in the USA. Not too hard though to find Argentine wine here and I came across quite a good selection locally.

Argentinians are very proud of their Bonarda and, with close to 45,000 acres of it, it is second only to Malbec (76,000). In the whites, Torrontes is their signature grape with some 26,000 acres. Chardonnay, on 16,000 acres, is the most popular of the European whites grown here.

As a matter of interest, there is also a La Rioja in Argentina. It is in the foothills of the Andes located at 1,700m above sea level and is the oldest wine region in the country. 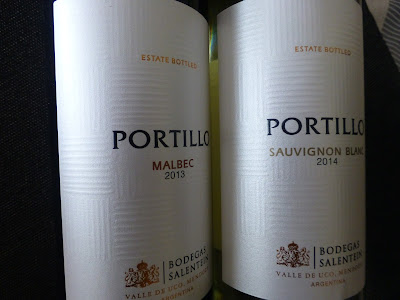 Fruit and freshness in a delightful bottle from Mendoza’s Uco valley. Open the screw cap and, as you pour, you’’ll notice a purplelish colour. Aromas are of dark fruit, especially plum. Its impressive flavour and rich softness on the palate make this a welcome addition to the table (especially if you have grilled meats) and, at this price, it will also find a welcome in your wallet.

The Uco valley is named on the label but the estates are high up, located between 1050 and 1700 metres, the winery itself is in the foothills of the Andes. Dutch owned Salentein is noted for its Malbec and this well balanced effort is Highly Recommended.

This excellent Sauvignon blanc is also called Portillo, after a pass in the Andes that is a gateway into the high altitude Salentein vineyards. It is a 5,000 acre estate with 1124 acres of vines. While Torrontes is by far the most widely grown white grape in the country, the Uco Valley is highly rated for Sauvignon blanc and producers Fournier and Salentein are noted as two to check in Evan Goldstein’s Wines of South America.

Colour is a light gold with tints of green. White fruits abound in the aromas and on the palate. It is fresh and crisp, very approachable with a decent finish and Recommended.

Speaking of their reservas, Las Moras say: “This is where we get serious.” The wine has been aged in French and American oak for 12 months. Big aromas of ripe fruit greet you as you sniff this. Smooth and fruity, with very good aftertaste, illustrates why Malbec, from Argentina mainly, has taken the US by storm. This is an excellent one to get us into the game and not a very expensive one either. It has an elegant balance between fruit and wood and is Very Highly Recommended.

San Juan, La Rioja and Mendoza are all areas in the the wine region of Cuyo, a region that produces ninety per cent of Argentinian wine. Here, Las Moras are highly regarded producers. This Malbec is a gem but their Black Label Syrah is stellar according to The Wines of South America. They also produce the well oaked Dadá that was quite a hit at the Our Table event in Cork a few weeks back. 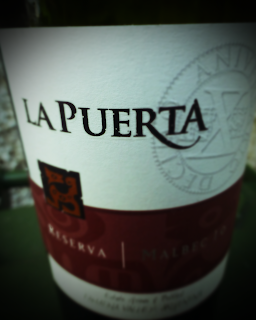 The Famatina Valley is in La Rioja, the vineyard at a height of about 1,000m. Thirty per cent is aged in oak for 6 months and then blended with the 70% that has been raised in stainless steel “achieving greater balance between the oak and the fruit”.

This intense red coloured wine has aromas of ripe fruit, hints too of smoke. It is another excellent Malbec, smooth with rich plum flavours and a long lingering finish. Very Highly Recommended.

Valla de la Puerta, an estate of some 750 acres, produces premium grape varieties and, according to the Wines of South America, is also well known for turning out some of Argentina's finest olives, peaches and plums.