I have neglected talking to you about the Menu du Jour in French cafés. You’ll have no choice but you’ll have a very satisfying meal for somewhere between ten and fourteen euro.

Our latest example came today in the Medoc wine village of Listrac. They had a board outside offering the Plat du Jour for €7.50. We had already bought some local wine there, from the small Listrac and Moulis appellations, before sitting down for lunch in Le Relais de Listrac. The Menu du Jour offered the first two courses for €11.00 euro, the dessert for just three.

The opening salad was promising. The main part was a tasty duck terrine and the salad leaves were fresh and every well dressed and the gherkins added to both the textures and the flavours.
The main, Sautée de Veau, was a little gem. The perfectly cooked veal was accompanied by some excellent Medoc mushrooms (full of flavour) and a spoon or two of mash, all in a lovely sauce.

We were offered desserts off the other menus but I had a feeling that the one cooked for today would be good and so it proved. It was a cherry cake, according to the friendly waitress. In fairness it is packed with cherries and served with a cold custard. I think we met everyone in the house, including the chef who shook hands with the two of us as we left.
By the way, not too much white in the Medoc but do look out for the Chateau Saransot Dupre 2012. This is a quote from the chateau website: The Château produces an excellent dry white wine from old Sémillion, Sauvignon and Muscadelle vines. The harvest is vinified and aged in oak barrels. This wine, which enjoys a great popularity among connoisseurs recalls the fine white wines that Listrac produced in the second half of the 19th century, wines that were almost as famous as the commune's reds. Well worth a try. If the proprietor of the Relais had produced it earlier we might have bought it but by then our reds were safe in the car.

The roads in the Medoc were quiet, just as they had been last Monday and you wonder what kind of landscape you'd see here if there wasn't a wine industry. We headed for the village of Margaux, one of the capitals of that industry, and for Maison du Vin in particular.
The tourist office is also incorporated in this fine building and they sell a large range of the local wine. But they don't do tastings here. We worked our way through the display. By the way, the bottles are empty. I checked the Chateau Margaux Premier Grande Cru Classé 2005!

We reckoned Margaux could do without our custom but we did buy a selection across the range, including a Chateau Kirwan 2010. We Irish have to stick together!

Got a few photos around the town and, with the temperatures again up around the 30s, headed “home” to Arcachon, buying a kilo of mussels (€4.95) on the way. That should keep us going through the World Cup. A bientot! 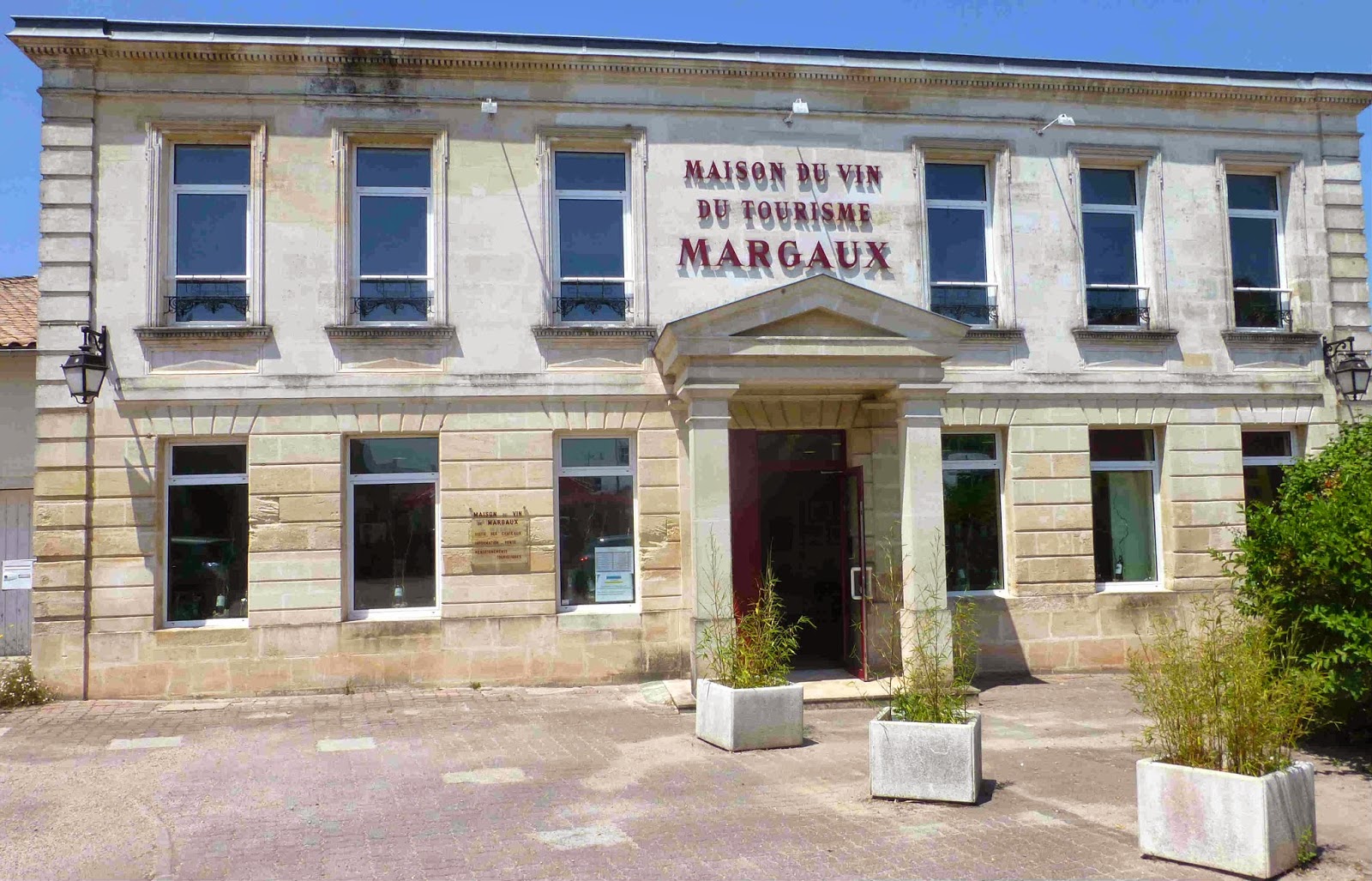