Didn't expect a clinical psychologist to be the star speaker at the annual Good Food Ireland conference in the Shelbourne Hotel (Dublin) yesterday. But that psychologist was Dr Maureen Gaffney and she took the room by storm as she looked at the Feel Good Factor.

Must admit I’m one of those people who just love to see a smile. Maureen says smiles “are all important”. “People are ready to co-operate with you..work on it.. smiles help to form that very important first impression. We all have bad days .. act positively especially when things are bad.” She said there is  evidence that shows that smiling even helps the smiler. “It triggers (even fools) your brain”.

And she also pointed out that a negative mood in the team leader can have a negative influence on the staff, your staff. This is a “high risk” to business. So learn to smile. Cheese!

“Get your self right..then you'll get a whole lot more right. Learn, achieve, grow. Vision is vitally important, start with your vision. Values are really important, not just accessories...There is evidence that people driven by a higher set of values do better.”
Set challenges, she urged. “Keep learning, growing, have projects, invest time and effort in them. And connect! Not just on digital platforms but also in the real world, family, friends, clubmates. These real connections will provide “personal experience and insight, contextual information, personal recommendations”.

So get social,and get connected, she urged. And she ended with a reminder about that smile. “Nurture your optimism!”

Xanthe Clay, author and journalist, spoke on the fickle British market, especially the fickle press. One day they headline that coffee is good for you, a week later they say it is bad for you. She urged irish producers to give value for money and highlighted the importance of trust (especially after the rocky year that saw the horse meat scandal gallop across the headlines). “Be open, she said. “Show people what you do. If you do add an additive to your food, list it, explain it.” Much better than your customers ambushed by the news in the press later on.

Asked what were the outstanding Irish qualities, she didn't hesitate: “Tradition, warmth, quality. These never go out of fashion.”

Coming into fashion is Origin Green, Bord Bia’s new programme to enhance and promote sustainability and explained on stage by Una Fitzgibbon. This was quite a sombre presentation, no jokes here. Great to see producers such as the Apple Farm’s Con Traas and Stonewell Cider’s Daniel Emerson being very enthusiastic about it on a short film. “This is a big deal,”said conference chair Darragh McCullough. “Only going to get bigger.”

Margot Slattery of Sodexo started with some very impressive numbers: purchases of some 18 million euro in Ireland every year. 420,000 employees worldwide and growing. “We stand for sustainability and fresh food” as client companies are looking for healthy weight and healthy life for their employees. Sodexo run gyms, even detox programmes.
Margot said they feed 50,000 a day in ireland. “Not frozen food, these are cooked, from scratch, on a daily basis.”

Just before a break for lunch, there was a panel discussion on Digital Marketing and two bits of advice emerged, at least two that I noted. Check out the recent changes in YouTube as they make it more interesting to business. And also have a look at Vine for short video promotions.

If Maureen Gaffney was the morning star then Pádraig Ó’Céidigh caught the attention in the afternoon. The founder of Aer Arann took us on a flight. He started in the Comfort Zone, then challenged us to enter the Stretch Zone before warning us about the perils of the Danger Zone (here, you can damage yourself, he reported, from experience).
Citing the small beginnings of what is now the Kerry group in 1972 and the choice made by Clonakilty Black Pudding’s Colette Twomey to run the company after the death of her husband as examples of leaving the comfort zone.

And Padraig is optimistic right now. “This is a great time to be an entrepreneur. There is great optimism out there, great opportunities. Time to leave the comfort zone.”

“There have never been such a demand for good quality food. Be solid on your own two feet, use what’s between your ears. No reason why we can't have another Kerry.” 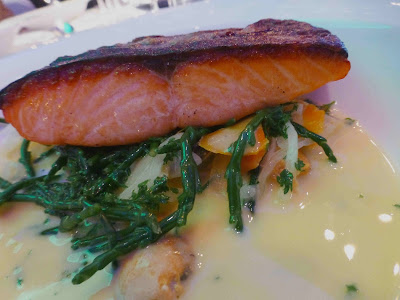 The world will go on with you or without you. Make sure it’s with you. Believe it and go for it. Never forget your roots and use that little bit of Gaeilge!”

An afternoon panel discussion on our food future produced some interesting points. Martin Shanahan thought too much of our fish is being exported. Country Choice’s Peter Ward urged the industry to be creative, to re-invent our own Irish produce. Chapter One’s Ross Lewis says he sees confidence building in young Irish chefs, “not necessarily mimicking foreign chefs.The industry has changed more in the last three years than in the previous thirty.”

Minister for Tourism Alan Varadkar launched the Good Food Ireland prepaid MasterCard, a food travel passport for visitors to the county’s producers, shops and restaurants and said he was encouraged by progress in tourism numbers this year and employment growth in the industry. He lauded the “great decision” by government colleagues to retain the 9% VAT and acknowledged that lobbying had had its effect and confirmed that there were no plans to increase the rate in the future. We are very much in recovery mode.” 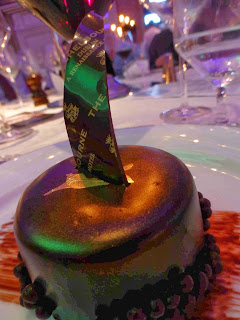 The delegates assembled in the same room for a cracking dinner in the evening. Skeaghanore Duck and Clare Island salmon were the centrepieces, all washed down by superb wines from Classic Drinks.

The awards were announced as the desserts were being served and the large Cork contingent had plenty to cheer about with Midleton's Sage Restaurant, URRU Culinary Store in Bandon, MIlleens Cheese, Kalbo’s Cafe in Skibbereen and Kinsale’s Fishy Fishy all winning their categories.

One of the loudest cheers of the night went to Ballymaloe’s Rory O'Connell who was declared Ambassador of the Year, mainly for his part in feeding, at short notice, 10,000 delegates at the recent Web Summit. Mount Juliet won three awards including the Supreme Award and Restaurant of the Year Award.

All the awards were presented by An Taoiseach Enda Kenny who smilingly indicated there were three women he must listen to: Mrs Kenny, Angela Merkel and Margaret Jeffares (the dynamo behind Good Food Ireland).