Five finalists announced in Euro-toques young chef of the year 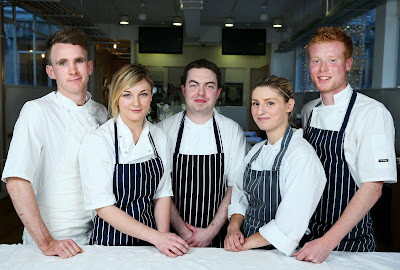 Euro-toques have announced their five finalists in Ireland’s most distinguished culinary competition making Ireland one step closer to discovering the Euro-toques Young Chef of the Year winner 2013.

Euro-Toques are looking for three simple winning ingredients when it comes to selecting the finalist for Young Chef of the Year – talent, enthusiasm and a passion for Irish food and heritage. Euro-Toques Young Chef of the Year 2013 is in association with Fáilte Ireland is looking to identify young talents who have the potential to represent and define the Irish culinary scene, drawing from our land, traditions and culinary heritage.

The theme for the 2013 competition is ‘Food Memories: Your Interpretation?’ and it will be carried right through to the final event on November 24th; where the young chefs will use the past as an inspiration for the future, in order to create contemporary dishes that reflect re-imaginings of flavours, ingredients and presentation.

Judges for the final will include Elena Arzak, Best female Chef in the World in 2012 and joint head chef of three Michelin stared restaurant Arzak alongside her father Juan Mari Arzak. The Euro-toques Young Chef of the Year 2013 will win a stage at ALMA, the International School of Italian cuisine in Colorno Italy, headed by world renowned chef Gualtiero Marchesi, amongst other exciting opportunities.
Euro-toques