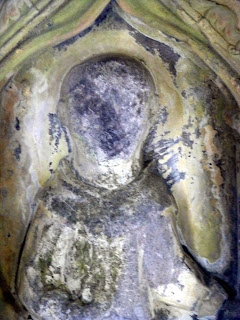 There is, in the Askeaton Franciscan Friary, a saint whose face is fading away. For generations, visitors with toothache and related problems have been kissing him on the face in the hope of a cure. Not too sure if the aches vanished but the saint’s face, at least the area round the mouth, is vanishing.

In the same abbey, there is a statue of Saint Patrick, high in one of the internal walls, easily missed. I’d not have seen it but for the help of a local man who also told me about the toothache saint and the unknown knight. The story is that this anonymous knight arrived in Askeaton and died there and is buried in a wall in the abbey with the following inscription: Pass me for I am strange.

But the real highlight for me is the cloisters (below), more or less intact in this 14th century building. These, plus the saint, the knight and Patrick are national treasures, open to the elements, including the criminal ones. 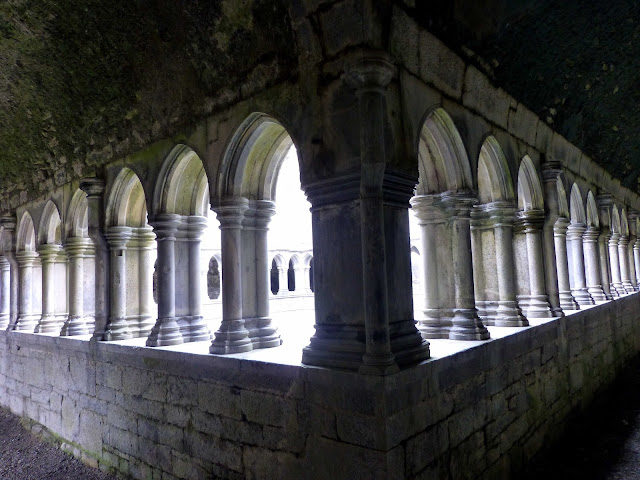 No chance that early aviator Douglas Corrigan would remain anonymous. Denied permission to fly from New York to Dublin, he was given the option of NY to San Fran. But the intrepid pilot headed east and landed in Dublin, claiming his compass had mal-functioned! 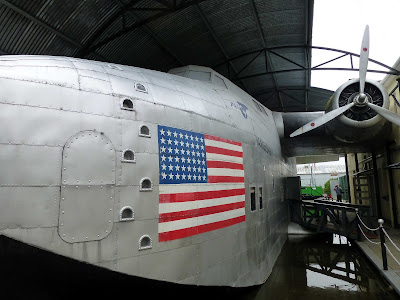 Heard that yarn and a whole lot more in the fascinating Flying Boat Museum in Foynes earlier in the day. Many stories are about the flying boats in their heyday at Foynes (late 30s, early 40s) and obviously lots are of Irish interest. The highlight though is a full size replica of the Yankee Clipper (built by Boeing and called the B314). This gives a terrific idea of what a flight in this type of machine was like.

Here also you’ll hear how, and why, Irish Coffee was invented. There is a little gift shop and also an impressive little restaurant, the B. O’Regan. ”Mouth-watering home cooking at very reasonable rates” they say. Soup and brown bread for €3.95 sounded reasonable but my plain scone cost €2.95! But it was of decent quality as was the reliable Bewley’s Coffee.
After that, headed out the Shannon estuary, as far as Tarbert where we saw the impressive car ferries come and go between the Kerry port and Killimer in Clare. Pity the day’s weather wasn’t the best. It was dry and generally dull but we still got a great idea of the impressive estuary,  Ireland's largest.
Headed back then, via Askeaton, to Ballingarry and the Mustard Seed, set in a former convent. Great welcome here, local cheddar, peaches and Prosecco in the room, and then a walk in the garden, a garden given over mainly to vegetables but with some gorgeous flowers and surprising mini-vistas, even including a little Buddha shrine!

All that was needed now was a good meal. And I got it at the Mustard Seed. Superb from start to finish. Briefly, it was Rabbit and Pig Terrine, Lemon Sorbet, Assiette of Lamb (above), and Selection of Irish Farmhouse Cheeses (including Milleens and Cashel Blue).  Five star. And then a comfy finish with the end of the wine and coffee in front of the fire! Happy days.