Feed the birds and tales of wealth at the castle!

“I ask of you two^ things...Please feed the birds. They will probably bully you until you do anyway...It’s in the yellow tins to the right of the Aga.”

Normally when you hire a property, you get a long list of dos and don’ts. But our lady had a very short list. And that first request was easy to comply with, especially since we feed our bunch at home in the city. Much the same mix of birds here with the notable addition of a posse of greenfinch.

The Aga too comes in handy, especially today after the weather changed. A bad morning followed by an okay afternoon and now the fog is in!

Still we had quite an excursion to Glenveagh National Park and Castle. The Park covers over 16000 hectares close to Letterkenny, a beautiful stark wilderness of rugged mountains and pristine lakes. Prices are very low, about half what you’d be paying in the continent for a comparable attraction. 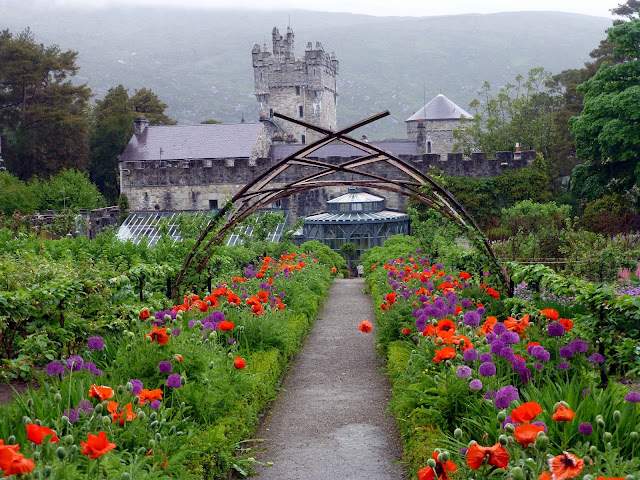 There is an office close to the entrance and here you pay three euro for a shuttle bus to take you the four kilometres to the castle where the entrance fee is a fiver. It is a guided tour and our genial host was Vincent.

There were about six or seven tour buses parked there so the shuttles were busy. Don’t know how the midges arrived but there were zillions of the pesky feckers and I reckon there were people scratching in public that never scratched in public before.

The estate of Glenveagh was created in 1857-9 by the purchase of several smaller holdings by John George Adair, a wealthy land speculator. Adair was to later incur infamy throughout Donegal and Ireland by ruthlessly evicting some 244 tenants in the Derryveagh Evictions of 1861, the “sad side” of the story according to Vincent.

There were better times under its most recent private owner Mr Henry McIlhenny of Philadelphia who bought the estate in 1937. Henry McIlhenny was an Irish American whose grandfather John McIlhenny grew up in Milford a few miles north of Glenveagh. After buying the estate McIlhenny devoted much time to restoring the castle and developing its gardens. 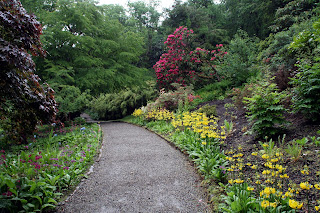 Eventually McIlhenny began to find travelling to and from Ireland too demanding and the upkeep of the estate was also becoming a strain. In 1975 he agreed the sale of the estate to the Office of Public Works allowing for the creation of a National Park. In 1983 he bestowed the castle to the nation along with its gardens and much of the contents.

Glenveagh National Park opened to the public in 1984 while the castle opened in 1986. The Castle  is a super visit, all the more so if you have Vincent to guide you. He will tell all about the famous people who were wined and dined here and, among so much more, will point out the decanter that McIlhenny received as a present in the 1950s, a decanter that holds no less than eight bottles of whiskey!

There is much to see and do here in the park, including many walks. After viewing the castle gardens, including the walled one, and also the lakeside swimming pool (alas no longer heated as it was in the good days), we confined ourselves to just one walk and that was about four kilometres back to the entrance. To find out more about the walks, the gardens, the many events, please check out the park’s website.

There is a tea rooms at the castle and a brilliant restaurant at the entrance. We popped in there after our walk and had a terrific choice and enjoyed great service as well. The circular place is really bright and spacious and has a shop alongside. I absolutely enjoyed my Chicken curry with rice but was surprised that my bottled water, Prince’s Gate, came from Wales, not that I’ve anything against the Welsh, but would have thought a state run park would have had one of the many Irish waters, maybe even a Glenveagh water, for sale.
Still time for another castle before returning to our hillside haven in the fog! This is under the office of public works and, called Castle Doe, is on the edge of Sheephaven Bay. Doe Castle is situated about one mile off the Carrigart-Creeslough road.

Built in the 16th century, this MacSuibhne castle is one of the better preserved in the north-west of Ireland. It was here that Owen Roe O'Neill returned in 1642 to lead the Irish Confederate Army during the Wars of the three kingdoms.

From history to trivia. Brian McFadden proposed to his (now ex-) wife, Kerry Katona at the castle in 2001.

^ The second thing was also pretty easy to comply with.
Back to diary index
Donegal Glenveagh National Park greenfinch