Day 1
Three o’clock had been the target arrival time at our cottage in the hills above Downies in County Donegal. And, after close to five hundred kilometres, we met our hostess bang on time.

There had been a few interesting stops in between, one at Drumcliffe Churchyard, just north of Sligo, the burial place of William Butler Yeats under the shadow of Ben Bulben. Cast a cold eye on death.... But here too is a lovely cafe serving sweet pastries and Bewley’s Coffee and they also sell quite a few high quality souvenirs. 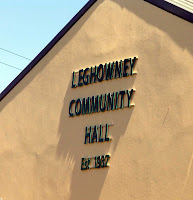 On then to a tweet-up with chef Zac Gallagher at the Leghowney Community Centre, our first stop in Donegal, where he is part of the regular Country Market every Saturday. James McCuddy is a main driver in the movement here – he has a great admiration for the way the local food movement has developed in Cork and hopes Donegal can learn from it. We had quite a chat before heading off for Downies and our three o’clock appointment.
This cottage is not in the middle of nowhere. It is at the end of nowhere but comes equipped with fantastic window seats, a box bed by the fire and a four poster bed upstairs and loads of other innovative touches. But is has all the modern gear needed for a comfortable holiday including Wi-Fi. Even a welcoming bottle of wine!


But that is not all. Being high above Downies it has fantastic views over Sheephaven Bay –just waiting now for the sun to go down. Actually, just after we had settled in we were driving again, this time taking the trip around the Rosguill peninsula, the one to the west of Fanad. It is the one we are on, small but beautiful.
Back from the drive, it was time to eat. Had nothing all day except a gorgeous Almond slice at the Drumcliffe Tea Rooms and a very tasty Goat Cheese Tart from Zac


Down in Downies, also known as Downings, the beach was packed, with people and cars, just like Redbarn in the good old days. Had a walk along there to add edge to the appetite and then strolled over to the local hotel, only to be told the restaurant was booked up until 8.30.
No good for a starving Corkman but the receptionist cheered us up by telling us they were doing bar food. The service was very friendly but rushed and a little hit and miss - understaffed! On the other hand, the food was rather good.


Started with a Warm Duck Salad and then tried the Sirloin Special. The meat was class, the mashed potato, well it was mashed potato. CK’s Salmon was one of the best she’d had and the Pak choi went well with it. She also had a mound of the mash.
A bottle of Valpolicella completed the picture and now we are ensconced in the cottage, supping the hostess’s Merlot and waiting for the sunset. To see it at its best we’ll probably have to stumble up the hill by the garden and no doubt stumble down again! 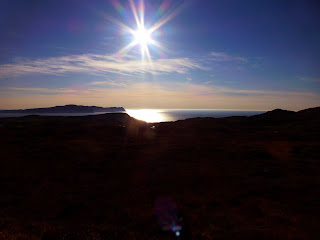 Back to diary index 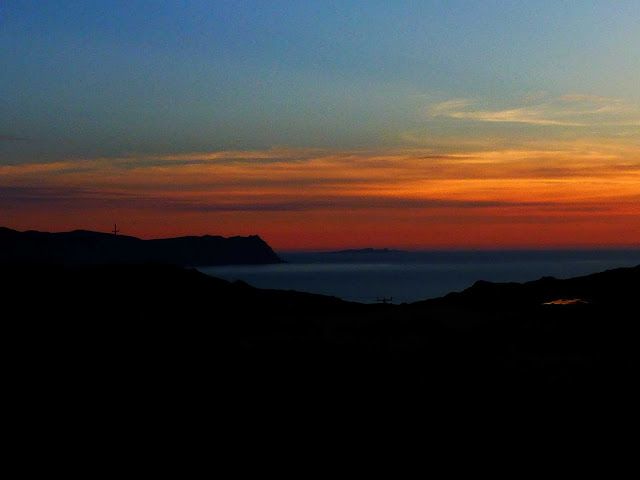