February 22, 2013
Yalumba’s Ferrari wows Cork Supper Club
Yalumba’s Jane Ferrari was the star of the show at the O’Donovan Off Licence Cork Supper Club in Club Brasserie this week. The well travelled Aussie had some great wines from the venerable but vibrant Barossa winery and some terrific yarns and observations from her years there and on the road.


Gary O’Donovan opened the evening, welcoming one and all to the "continuing adventure" that wine is. Don’t get stuck in a groove was Gary’s advice and promised that the evening would be a great chance to try something new. And so it proved.

We had been welcomed with a choice of either the Y series Vermentino (2011) or the Merlot (also 2011) and then had three tasting before the multi-course meal began.
Loved the Organic South Australian Viognier (2011) and the excellent Pewsey Vale Eden Valley Riesling (2010) but really fell for the Organic South Australian Shiraz 2011 (and just picked up my order at the local branch today!).

Jane, in her admittedly “ugly broad Australian accent”, told us that Yalumba was founded in 1849, that she herself started in winemaking and has worked in every part of the business. Ten years ago, she started on the road, selling Yalumba all over the world.

It wasn't always easy for the Smith family, the Yalumba owners. Nor for their employees! Back in the tough times of the 80s, the winery was at risk, saved only by an agreed four year pay pause. Apparently, that particular piece of austerity paid off.

It was a very enjoyable evening in Club Brasserie. The courses flowed and so too did the wines with the starters accompanied by a smashing Chardonnay, this the Eden Valley Wild Ferment 2009. 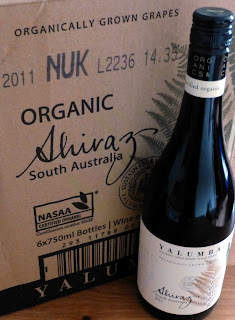 Some serious stuff followed. Those that took the fish course, were served the Yalumba The Virgilius Viognier 2008, “a wine of finesse, opulence with layers of complexity and lusciousness”, yet all in a restrained combination.


Those eating the steak enjoyed the Signature Cabernet Sauvignon and Shiraz (2008). “This is my favourite of the things we do,” said Jane, telling us that the signature is of a different person each year.

This one belongs to Judy Argent who came to work there for her summer holidays in 1977 and is still there. It is a magnificent wine, combining great power and elegance.


And still more wine followed. The Cheese plate was matched with the soft and fruity characteristics of the Menzies Coonawarra Cabernet 2003 while the dessert came with the “sticky”, The Yalumba Museum Muscat.

The very pleasant evening ended on a light note, not that it was ever heavy, when Gary tried to “dig” a little deeper to see what Jane really thinks. Oh by the way, we never had a problem with that ugly broad accent and everyone loved her broad sense of humour.

Gary asked her what her favourite thing about New Zealand was. “Leaving,” was the lightning response. Her favourite politician? “The best looking.” He also quizzed her on her “crush” on Ronan O’Gara. She confirmed that it was still alive and kicking, just like the international career of the player himself, “there is life in the old dog yet” she said.

Then it was off to bed for Jane though not before she managed a few paragraphs in her blog. Check it out here.

• This was a terrific wine evening, thanks to Jane, to O’Donovan’s team and to Brian Hogan of Cassidy Wine Merchants and to Club Brasserie. Keep an eye on O’Donovan’s Facebook page for future events. https://www.facebook.com/odonovansofflicences?fref=ts