Some distinguished wine landed at L’Atitude 51 last evening with Jane Boyce MW in charge of the seven strong group, aided and abetted by Conor O’Brien of James Nicholson Wines . 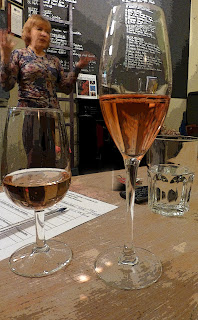 Maybe because it has three years on its younger rival and maybe because 2005 was “a fantastic year” most of the audience preferred the Phelan Segur to its “less developed” left bank rival, not that I’d have turned either of these Medoc wines.

You may see the fantastic Phelan story here. The Barton site is under repair, methinks, but there is a terrific account of the Irish family here. 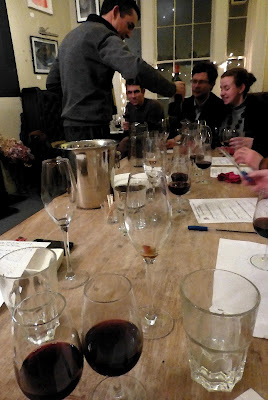 We got off to a great start with a glass of one of the oldest sparkling wines in the world, this from a vineyard started “by a Dutchman and a West Cork lady”: Rives-Blanques Blanquette Limoux 2009 (Limoux, France). Top class, lots of tiny bubbles that kept coming, and half the price of champagne.

Now for an even lighter pink, this time the still rosée from Chateau Vignelaure La Source 2011 (Provence), from a vineyard restored from the ruins about 20 years back by Kathleen and David O’Brien (of the famous horse training family). The current Dutch owners value the Irish connection.

Australia’s Clare Valley is named after the Irish county and provided us with the next wine: Pikes Riesling 2012. Jane explained that, with Riesling, the moment of harvesting is critical, the wine being made more in the vineyard than in the winery. They sure got it right with this one.
There was a County Tyrone connection with the final white, the Domaine Sainte Rose Barrel fermented Roussanne 2009 (Languedoc, France), but there was quite a split in the audience here as quite a few didn’t like the oak. It certainly had the toast and honey but was really well balanced with the “backlash of a spicy hot finish”. Jane recommended matching it with char-grilled food and also smoked salmon and so on.

Alan Brady, a newspaper man from the foothills of the Mourne Mountains is credited with starting Pinot Noir cultivation in New Zealand. He was told he was mad as “this is a very difficult variety to grow”. Last night’s audience, who enjoyed some delicious canapés all through, were glad that Alan stuck with and I think everyone enjoyed the Mount Edward Pinot Noir 2008 from Central Otago in New Zealand.

And then it was on to the splendid conclusion. But as that evening ended the Bringing the Wine Geese committee stayed behind to plan ahead. Some great evenings have already been lined up and many more are in the planning stage, all under the umbrella of The Gathering.

If you have any ideas, big or small, on the Irish wine connection, then why not get in touch. Just to get an idea of what is in the pipeline, please check out the list here.