A Quart of Ale± #97. On the craft journey with Lineman, Whiplash, Galway Bay

On the craft journey with Lineman, Whiplash,  Galway Bay

This lager has a very close to black body with a soft tan head. And, yes, Schwarzbier is a lager - check it out at the finish! All that darkness, the roast malt flavours, will certainly confuse as you go through the stages. The trick is of course to get the balance right and then Schwarzbier “is a marvel to experience” according to Jeff Alworth in the Beer Bible.

The Lineman colour is on track and so too are the aromas with the mild roasty toasty touch. And so it continues. Flavours on the palate are not too far away from stout but soon comes that characteristic lager finish.

Lineman’s Schadenfreude is indeed one of those marvels. “A cold fermented lager brewed with Munich, caramel and roasted malts then lagered to produce a super smooth dark beer.”

The recent history of this style goes back to the toppling of the Berlin Wall (according to World Atlas of Beer) and the re-unification of Germany. “What the five East German states brought back to the nation was Schwarzbier.” It had more or less died out in the west of the country.

This smooth and satisfying Lineman beer, which first saw the light of day on February 22nd 2022, is unpasteurised and unfiltered and is suitable for vegans. It may contain sediment. Serve chilled. 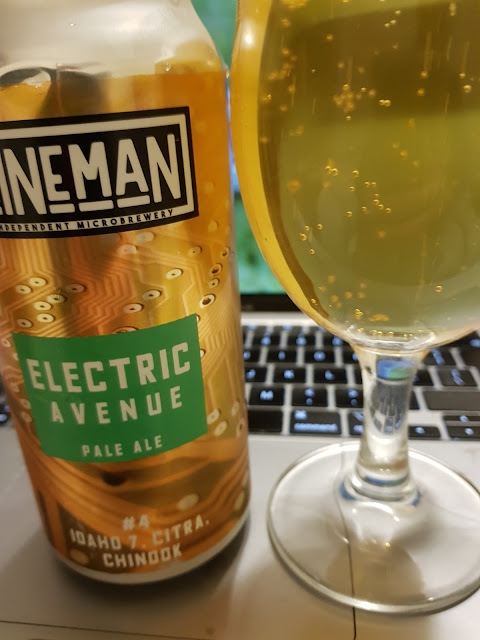 Lineman’s Electric Avenue has returned with the 4th release in the series and they are “using distilled hop oils to compliment our whirlpool and dry hop additions to produce a modern West Coast style Pale Ale, a crisp American style pale ale. We used a combination of T90 pellets and natural hop oils”. The hops used are Citra, Idaho 7 and Chinook, an all-American trio.

The liquid is bright and clear with a light gold colour and no shortage of rising bubbles. Aromas are meek enough but exotic fruits (mango, pineapple and grapefruit) peek through along with pine notes. The fruits have more of a presence as you begin to drink and you realise you have quite a refreshing beer to enjoy. No strong bitter notes in a satisfactory finish. Another fine beer from a very consistent brewery

This beer is unpasteurised and unfiltered. Suitable for vegans.

The series was launched in February 21. Where do the Electric Avenue name come from? “As well as being the name of that fantastic 1983 Eddy Grant song; Electric Avenue in Brixton was the first street to be electrically lit. We felt it was a good name for a series of beers that we want to trial new ideas on.” Colour’s more black than brown and there’s a silky and tight knit foam that hangs about a bit.  The aromas, of modest intensity, are on the toasty side led by coffee notes. And so too are the flavours (not too modest now though) and there’s quite a depth here. Really impressive. Malt certainly has the upper hand here yet there is a very satisfactory lip smacking finish with enough bitterness to allow the malt shine without having it too sweet.

It is quite a good example of the English style: the colour, the malt flavour, the ABV of about five. Not sure the 5% would qualify it as robust though! According to the Beer Bible, you are more likely to find these nowadays in Chicago rather than on this side of the Atlantic.

Wouldn't mind having a little duel between this and the Lough Gill Mac Nutty Macadamia Nut Brown Ale ( a favourite of mine). Those Macadamia nuts have been added as an ingredient.

This is one of the clearest beers I’ve seen in a while, really striking, with a lovely white head. Aromas, with floral and lemon notes, are modest. It is flavoursome and refreshing for sure, decent body as well and a hoppy (Mittelfruh) finish.

Unusually, it is a collaboration between the brewery and Galway United, the local football team. The name Triból means the drink of the tribes. Let us hope that John Caulfield’s men have something to celebrate at the end of the season. Not the only craft brewer involved in sponsoring football: Rascals support Saint Patricks.

They say: Founded in 2009, we are an independently owned and operated brewery based in Galway, on the west coast of Ireland. From classic styles to big barrel aged beers, we brew the full spectrum of beer with a passion for quality and innovation.

Pils (or Pilsner) is a pale lager first brewed in the 1840s in the Czech town of Plzeñ (Pilsner). Lagers and all its variants were born and bred in quite a small area of Central Europe, from Bamberg in the west to Vienna in the east is about 500km and from Gera in the north to Munich in the south is shorter at less tan 400km with Pilsen in the middle (more or less). Here you’ll find Pilsner, Helles, Märzen, Vienna Lager, Bock, Dunkel lager, Schwarzbier, and Rauchbier.

* If you want to read more on the lager family, then check out my recent review of The Beer Bible here.