The Old Bank Dungarvan. All Change In 19th Century Building

All Change In 19th Century Building

Dungarvan’s Old Bank restaurant, having had a difficult pandemic hindered “childhood”, is now really coming into its own, growing up rapidly and making a splendid impression from its prime base in the seaside town. The 19th century building has been impressively renovated and re-purposed.

It is multi-faceted, offering over 100 hundred covers over two floors in the main building. Sixty four in the downstairs part of The Bistro where fine food is served and fifty upstairs where even finer food is beginning to make an appearance via their tasting menus. 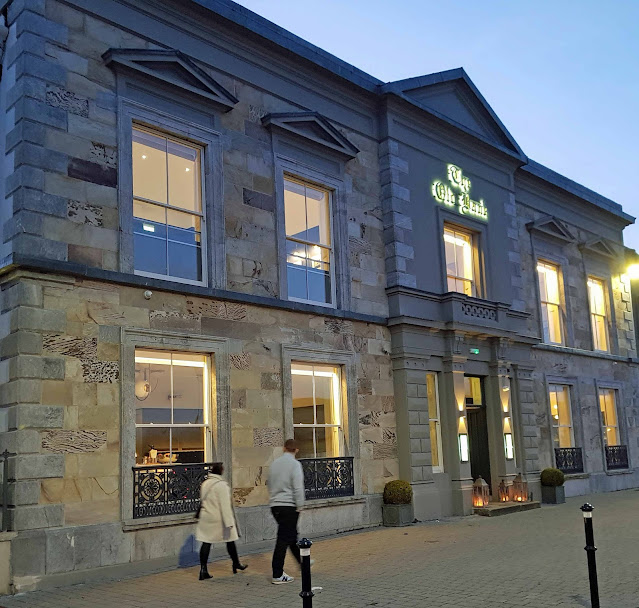 Of course they have a beautiful bar specialising in cocktails. Why not try the Blind Date cocktail? You never know. Plenty of local support too as I saw Blackwater Distillery, Knockanore, Mossie Joyce and Dungarvan Brewing mentioned as suppliers.

You can find your way to their Creamery Yard via a side-lane. This is a prime outdoor site. With some cover but meant for the good weather, all the better to sip a pint or a wine and enjoy a burger or a pizza. On the other hand, you can also enjoy private dining in the building, in one of their special rooms or in a vault! 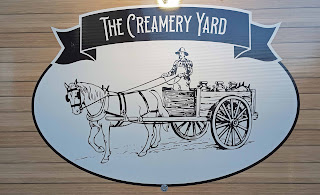 And there’s more. They have a nearby farm, looked after by horticulturist Gerry, where they grow much of their own greens and vegetables. They are also keen to expand expand their network of passionate local producers and supplier.”We’d love to speak with the likes of local foragers, hunters and fishermen.”

Chef Dave Larkin, Executive Head Chef , and the Old Bank have publicly stated their “commitments to a becoming greener, more sustainable restaurant”. Indeed, the chef has a statement on it and seasonality on their Instagram.

We called weekend before last  (March 13th) to try out the Early Bird menu. It’s €37.50 for three courses, or you can enjoy two for €29. The menu will be available from 5.30pm - 7pm, every Wednesday, Thursday and Sunday during February and March (keep an eye on their Facebook for updates).

You have the option of adding a glass of wine for €7. But, with a drive back to Cork on the cards, we asked for something non alcoholic and were given a choice. A sparkling wine caught our eye: the Vallformosa Cava. I'm a little sceptical about non alcoholic wines but we certainly enjoyed this one. It is produced with Macabeo, Xarel-lo and Parellada grapes, exactly the same grapes used in regular Cava.

We were seated in a very comfortable room indeed and by one of the street windows that also gave us a view over the harbour; no doubt there’s a better one from upstairs! The welcome and service were warm and friendly and we felt at home all through the meal that began with that Cava as we nibbled on two breads, one onion flavoured, the other Focaccia with Tarragon butter.

The Early Bird gives you a choice of four starters. Our two were very impressively presented and they tasted well also. Mine was Sea Trout, Pea, cucumber, wasabi, and herring roe. Eye-catching for sure but also full of delightful flavour and textures. The other was also very acceptable and that was the Goats Cheese, basil, pear, mushroom and Lavosh. The only note we made on that was that the cheese was very mild indeed.

On then to the mains and they were served with a side of potatoes and seasonal root vegetables. Neither the sides nor the breads are mentioned on the Early Bird list but are included in the price.

I had spotted the the Cod, cauliflower, haricot blanc, Morteau and Lemon dish on their social media and, even though the menu had changed a little, I still stayed with that and I was very happy with it. The fish, soft and seductive, was enhanced by its accompaniments.

Our other mains was the Barley Fed Chicken, black truffle, cabbage and consommé. The chicken came in a cube. Again the dish looked very well indeed but the chicken itself lacked just a little in flavour, not quite up there with the best of them. Still, the accompaniments did the trick and the dish was enjoyed and polished off.

Onward to the sweet finalé. The Early Bird offers a choice of three plus an Irish cheese plate. The desserts in fairness were not the usual suspects and we quietly (you don’t talk while your taste buds are enjoying themselves) polished off the Dungarvan delights of Buttermilk, blood orange, rhubarb, chocolate and pepper and the Iced Nougat, honey, apricot coulis and fresh berries.

The harbour was bathed in the colours of the fading sunset as we reversed and turned for Cork and we were home in a few minutes short of an hour. 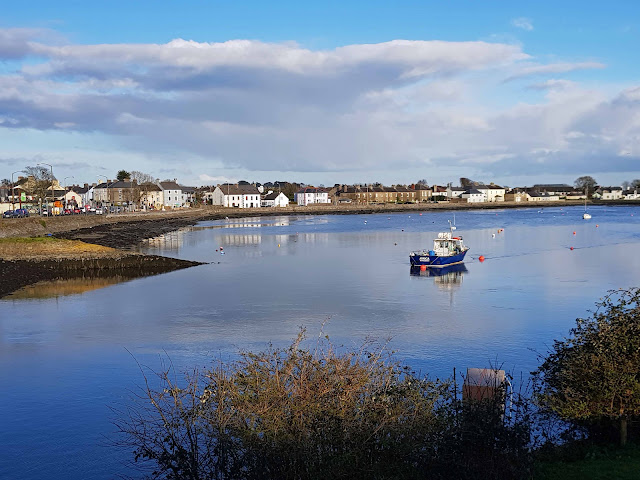