Legacy Cider. The apple doesn’t fall far from the tree! A Quart of Ale± #96 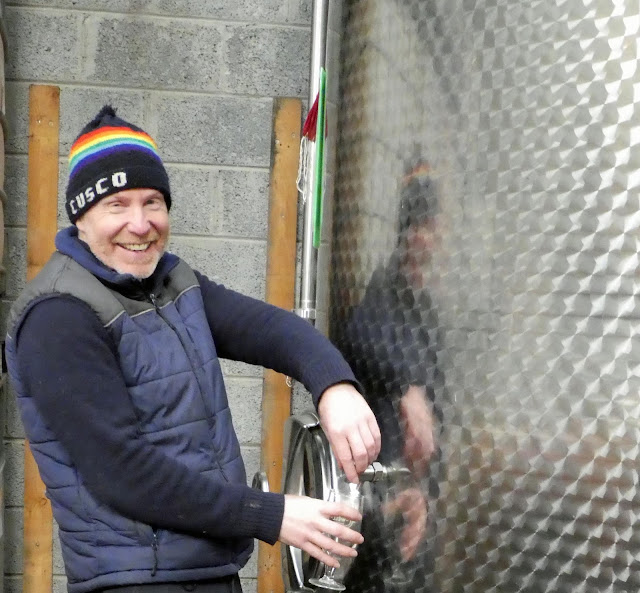 The apple doesn’t fall far from the tree!

There’s going to be some top notch cider coming your way in Legacy bottles soon. On a visit to the Dungarvan based cidery last week, I got a hint of what is around the corner thanks to owner Liam McDonell.

And there’s a lot of it here, so no worries about supplies. Some 80,000 litres slowly working its way towards maturity (it takes 6 to 9 months) and more in casks, bottles and other containers that pack the floor of the facility.

“Since you’re here, why not try some straight from than tank," offered Liam. He explained that they do single variety fermentation here with the blending coming at the end, after much sampling of course!

The Michelin variety is common in cider production and we headed to that tank first. It is a medium bittersweet cider with soft tannins. A few sips and we could see that, while very dry at present (all cider apples are dry), it is, in Liam’s words, “coming along nicely”.

Next up was a tank of Elstar and John O’Gold. This was lighter in colour than the Michelin with its characteristic pear drop showing well. Dabinett, another well-known cider apple (which also produces a bittersweet juice), was also true to character. Bramley is well known to cooks and usually eaten cooked due to its sourness and that went down well with CL, much to Liam’s surprise.

He is obviously looking ahead to getting all this liquid bottled and on the way to a wide spread of customers. He’a also looking forward to their cooperation with Cape Clear Distillery who have provided Legacy with some barrels, previously used for gin and for white wine. And they also have some barrel aged cider on the way; the process is quite well advanced and should be ready before the end of the year, certainly for Christmas. Also on the schedule for Christmas and before is an Apple Wine (using those wine barrels from Cape Clear!); it will come in a 750ml bottle.

And what was Liam doing when we arrived? Why, beginning work on their mulled cider for next Christmas. The 2021 edition went down very well but, as they started it in the autumn, the production coincided with their busiest time of the year and caused something of a bottleneck in the premises (which is big but not that big!). It is blended with award-winning Legacy Irish Cider and spiced with winter warming spices including cloves, nutmeg, star anise, cinnamon and more; a heart-warming drink to enjoy with friends and family. By the way, the spent spice mix finds its way to restaurants and into some tasty dishes!

While Legacy Cider is a relative new company, having been started in April 2016, apples have been very much in the McDonell family for at least three generations. Liam's grandfather was one of a number of locals encouraged by the government of the day to grow apples, And there was an apple market right where we were in Dungarvan. Indeed, Liam still uses some small wooden crates in which his grandfather stored and transported the apples. The venture eventually petered out as the group, with no value added, weren’t getting reward enough for their produce.

But the seed had been sown and Liam’s dad Pat took a different route. “My Dad became passionate in apple tree growing, achieved a PhD in the subject and developed his own miniature apple tree!" Pat still runs his own company and is “the chief advisor" at Legacy. As Liam said:  “He’s a wise old sage with over 40 years of experience.” 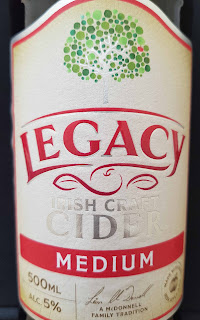 No wonder Liam went into apples, eventually going on to found the well-named Legacy. The Legacy Dry was their original cider. Liam is as enthusiastic as ever about it: “It’s my favourite as I think it has a lovely balance between sweet and dry. There is a 'good bite to it' as I’ve been told oftentimes, this 'bite' is the strong Bramley flavour coming through.”

And he is very happy also with their Legacy Medium. “This is a crowd pleasing cider; easy drinking, great flavour profile, natural apple aroma. Great with good friends, a warm sun, a good sporting occasion or kicking back on your own.” This one is a bit like the Alsace Gentil wine: it has no less than six varieties: Elstar, Bramley, Discovery, Katy, Michelin and Dabinette.

Latest: Catch Liam talking about yeast and more on Beoirfest this coming Saturday. He'll be joined by  Brewpub De Kromme Haring and Eik & Tid who will bring the beer experience. Interested? Register here for free.

Dine and Stay at The Tannery

Trip to Mahon Falls in the Comeraghs