A Quart of Ale± #94. On the craft journey with Wicklow Wolf, Guinness, Whiplash, Blacks

On the craft journey with Wicklow Wolf, Guinness, Whiplash, Blacks 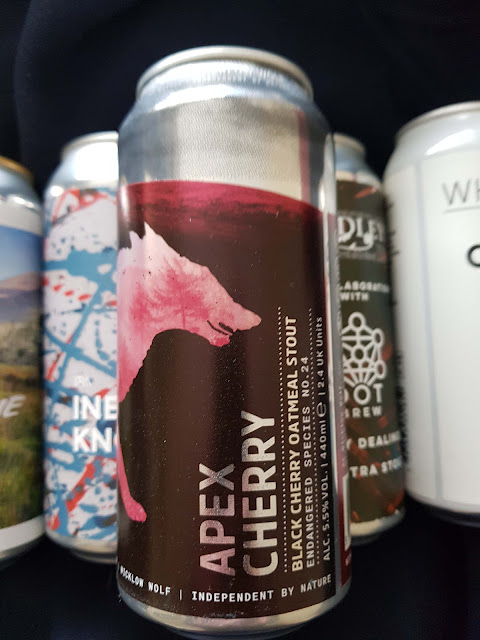 Not too much on the label here but I read that the ingredients include oats and cherry. Oats are used to enhance a beer’s texture, creating a velvety, creamy quality that is seen at its best in both stouts and pale ales.

It pours the expected black with a soft tanned head that gives you a few minutes of its time. Aromas are at once fruity and chocolate. And the fruit, those cherries, lead on the smooth and silky palate and across the lips, with the chocolate appearing again in the swallow before the finish comes wrapped in a refreshing moderate tartness. Not sure how much cherries were added here but the Wicklow pack got the quantity spot-on. The balance is perfect.

Brewed with Black Cherries, “this deliciously decadent 5.5% oatmeal stout is packed with layers of flavour”. Released into the wild in the first week in February. It is available nationwide in all good independent off licences and at the Wicklow Wolf Taproom (would surely love to try it there!).

Based on their well-known Apex Oatmeal Stout, this is another in the Endangered Species series and is therefore rather rare. Get yours before it goes extinct!

They say: Sustainability is at the core of everything we do. It influences how we brew, package and advertise our beers. From growing our own hops to installing state of the art systems in the brewery, we are doing all we can do reduce our footprint on the land around us. It is not all talk. Read more here

After a strong recommendation from Jeff Alworth in The Beer Bible (2021) I just had to try this Guinness Foreign Extra Stout (FES). Jeff says this is a “wonderfully rich and complex beer” but he doesn’t say, at least in the book, that he has a partnership with Guinness for his amazingly popular website Beervana.

Guinness say: We can trace the origins of Foreign Extra Stout back to 1801 and the original recipe of West Indies Porter. Originally brewed to withstand long journeys, the use of higher gravity and more hops resulted in a bold tasting beer with a complex flavour profile.

Colour is, of course, black with a tan head that sinks very slowly indeed. The aromas are quite intense with a definite fruity and roast character. A finger test into the tan foam produces much the same result and that is repeated when the first sip hits the palate.

And sipping is the way to proceed with this 7.5% bittersweet gem. Take it easy, the better to enjoy your FES.

Partner though he is (and he does disclose it quite openly on his web site), Alworth has found Guinness “hugely secretive about the process”. But his conclusion on “this wonderfully rich and complex beer” is positive: “Whatever the process, the result is one of the most intense beers on the market: a muscular 7.5% stout of great density and layered complexity.”

Must say, and no problem saying it, that I have been highly impressed by my bottle but there is now, in Ireland, as there mostly always was, quite a lot of competition when it comes to stout and porter.

Alworth himself, in the book, mentions Porterhouse’s Plain Porter and O’Hara’s Leann Folláin as outstanding candidates but even in the space of a few recent days I have been very highly impressed by Wicklow Wolf’s Black Cherry Oatmeal Stout and by the collaboration between Bradley’s Off Licence and Dot Brewing called Shady Dealings.

Long live choice. Long live the multitudinous possibilities of flavour which for so long were denied us. 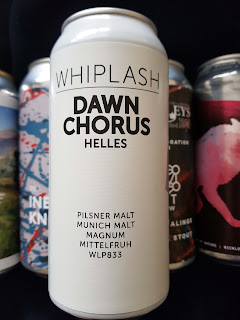 This bright clear golden lager comes from the busy Whiplash Brewery in Dublin. It has fountains of bubbles rising as the white head falls, the bubbles last much longer. The aromas with grassy and floral notes, along with some spicy notes, are moderate enough and are more or less as expected from the two hops used, Magnum and Mittelfruh, both German.

On its classic malt base, it is soft and refreshing in the mouth with light fruit (lemon) flavours and a little sweetness and just a little bitterness. Still it finishes well and overall is very easy-drinking and a good companion of an evening.

Lagers and all its variants were born and bred in quite a small area of Central Europe, from Bamberg in the west to Vienna in the east is about 500km and from Gera in the north to Munich in the south is shorter at less tan 400km with Pilsen in the middle (more or less). Here you’ll find Pilsner, Helles, Märzen, Vienna Lager, Bock, Dunkel lager, Schwarzbier, and Rauchgier. A small enough geographic area from which the beer which, in one form or another, accounts for 90% of all beers produced nowadays, came.

Pils or Pilsner is a pale lager first brewed in the 1840s in the Czech town of Plzeñ (Pilsner). Helles is associated with Germany, is close to Pilsner and it is known for its soft maltiness and that is where we came in with Whiplash.

* If you want to read more on the lager family, then check out my review of The Beer Bible here. 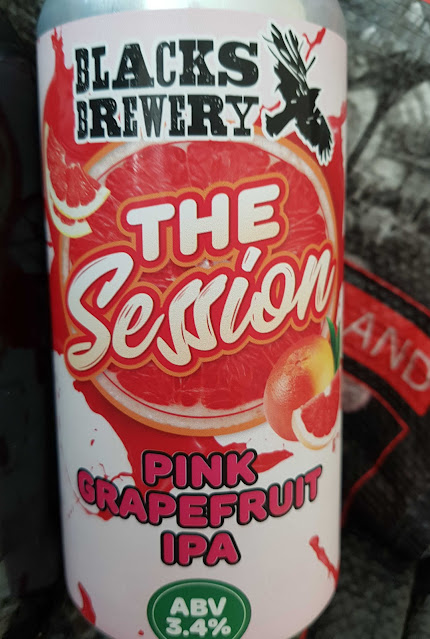 Packed full of hoppy goodness, and at 3.5% abv, it’s the ideal beer for days when you’re in the mood to drink a few. That’s the intro from Blacks of Kinsale to their Session Ale with a shot of Pink Grapefruit (listed as an ingredient)

Colour of this IPA is a hazy lemon/orange with a white head that fades away without really taking time to say hello. But what the beer does is to say hello, as early as the positive aromas, via the grapefruit. And the grapefruit continues the conversation on the refreshing palate, a lively sparkling palate that takes you smiling to an excellent finish.

They say that this beer is light and crisp in character with a streamlined malt structure, and the addition of new world hops bring floral, grassy and orange zest aromas to life. A taste of summer that’s available all year round!

Have to agree. While summer may be the optimum season, there’s no reason not to enjoy it even in midwinter, fire on of course, as I am. Just don’t tell the doc as my meds forbid grapefruit!