a Big Success at Vikki's 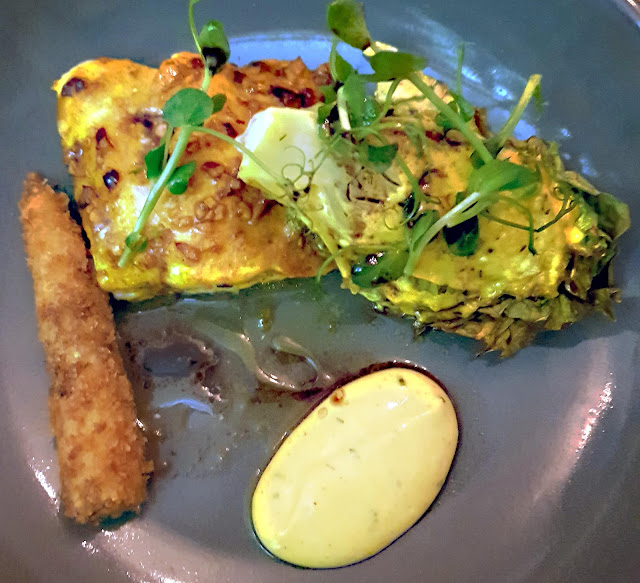 With the fire gently warming the room on winter nights or the sunshine in the garden in the the longer days of the coming spring, along with Chef Pat Kiely in the kitchen, an improved menu and an improved wine list, you have all the ingredients for a lovely meal here at Vikki’s Kitchen and Garden in Sundays Well.

“Chef Pat Kiely?”, you may well ask. “The chef that was in Les Gourmandises?.” The very man. Regarded by some of his peers as one of the best in Ireland, Pat can now be found in the kitchen of Vikki’s bringing his skills, his experience, his attention to detail, to an attractive menu of small plates.

And the upgrade from tapas to small plates is not the only one at the pleasant venue that was once the local post office. During Friday’s visit, I learned that the wine lists has also improved (including ports and sherries) and that there are plans afoot to lift quality at the restaurant in general, not that there was much wrong with before. So positive news from a venue that, like all others of its kind, has endured close on two bumpy years.

So how did opening night go last week? Very well and full of promise for the months ahead as far as the two of us were concerned. The highlight was perhaps the Malabar Baked Cod (13.50). The flesh of the cod was pristine, firm enough yet moist and that pearly white was lifted to exquisite heights by the marinade of fragrant coconut masala plus a moderate spice from the curry leaf mayonaisse.  Umami or what?

There are no starters as such - well there is a soup: the classic French Onion, served with Cheddar Cheese Crouton. Another that might fit that category is the Ham Terrine that’s accompanied  by apple purée, hazelnuts and sourdough croûtes.

We ordered two dishes to start with and two to follow. One of our earlier ones was Roasted Aubergine (9.50) and this came with crispy tofu, baby onions, confit tomato and rocket salad. This expertly executed plateful may well have converted me to tofu. Certainly Mr Kiely’s cubes were rich and satisfying and the best example of the food that I’ve come across and will make me more inclined to try it in the future.

Miso and Ginger Braised Pork Belly (12.50), served with sweet and sour apple and peanut crumbs, was a terrific pairing indeed. Quite a little riot of texture and flavour going on here and we really loved it, the soft flesh beautifully flavoured with miso and ginger, the sweet and sour of the apple slices and the gentle crunch of nuts.

And all those dishes were sped on their way thanks to two lovely wines, one from Beaujolais and the other a Picpoul de Pinet. I can also recommended their own Blue Haven Collection Sauvignon Blanc by Better Half in Marlborough, New Zealand. Look out too for the the Abadia de Seixo Albariño and you find other by-the-glass options on the list and in their wine of the month selections, a trio of red and a trio of white. The list is quite long and deserves more time than I gave it! Would be a help if it appeared on their social media - then I could have a long leisurely look before I visit!

Just a week or so after we enjoyed a gorgeous Basque Cheesecake at 51 Cornmarket, we were surprised to see another version in the trio of desserts at Vikki’s. This one though was totally different, done individually (while the 51 is part of a full cake), and served with a spiced rum caramel sauce, soaked up by a topping of raisins. Also gorgeous. Which one is the best? Hard to say but I will say it’s great to have them both! Certainly the cheesecake overshadowed the Vanilla Panna Cotta with poached pear which, in fairness, was another excellent dessert.

Quite a meal as Chef Kiely took us off piste and out of the routine. See the menu details here.