A Quart of Ale± #90. On the craft journey with Franciscan Well, Killarney Brewing, Trouble, Whiplash,Hope, and Wicklow Wolf.

On the craft journey with Franciscan Well, Killarney Brewing, Trouble and Wicklow Wolf. 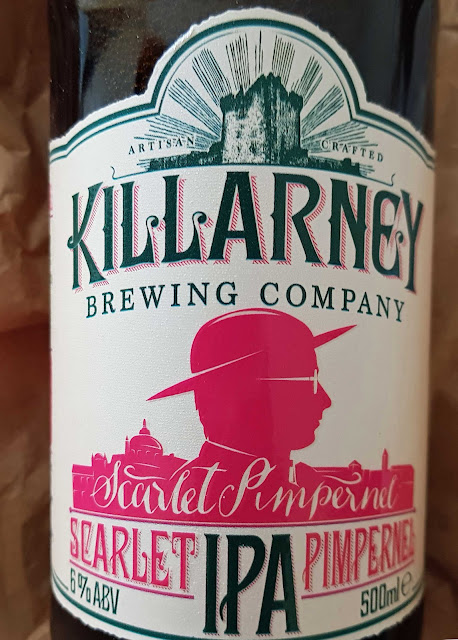 There is a statue of a priest, dressed in an older fashion, at an entrance to Killarney National Park. He is striding out, a man in a hurry. They seek him here, they seek him there - he is O’Flaherty, the Scarlet Pimpernel. And this IPA is named in his honour.

It has a deep red colour. “Best served with a thick frothy head so pour with vigour.” I missed that bit of advice so my head, a bit like the Pimpernel, didn’t hang about. Got “rough” with the second one and a better longer-lasting head was the result.

Built “on a smooth malty base”, it is not a million miles away from our Franciscan Well. Aromas are moderate, citrus and pine. There’s a light caramel sweetness on the palate. Overall, a good balance is found, hop bitterness is moderate, and they boldly recommend it as “a perfect partner for full flavoured dishes”.

During WW2, Rome based Monsignor Hugh O’Flaherty  saved over 6,500 people by hiding them in monasteries, farms, and other locations. After the war, he was awarded the US Medal of Freedom and Commander of the British Empire. 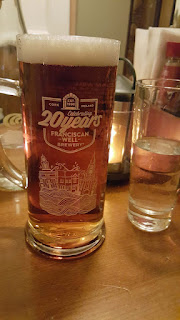 Franciscan Well Chieftain IPA, then described as “a great stepping stone into the land of big and bitter”has proved quite a popular beer since launched by the Cork brewery. Colour is amber, not a million miles away from their Rebel Red. Indeed, when I posted an early photo of the IPA, a reader challenged me saying I got it wrong, that is the red in the pic.

Certainly hoppy in the aromas, a burst of tropical.There’s a malty theme there too and both continue onto the palate. Citra, Tettnanger and Magnum are the hops and they make their presence felt here, with Pine and Citrus, but the malts (Ale Malt, Crystal Malt) ensure a flavoursome balance, meeting the brewer’s aim of “casual enjoyment” for the drinker rather than the “intense hoppiness” that some IPAs deliver, sometimes to the consternation of the casual craft drinker.

By the way, Franciscan Well is looking forward to the coming year. ‘ It’s been a long road for everyone over the last couple of years. Our focus has been on surviving but now we want to bring memorable moments and experiences back to the centre of what we do, ’  says Kate Clancy (right), marketing manager of the Franciscan Well bar. More details here, even the promise of a beer festival. 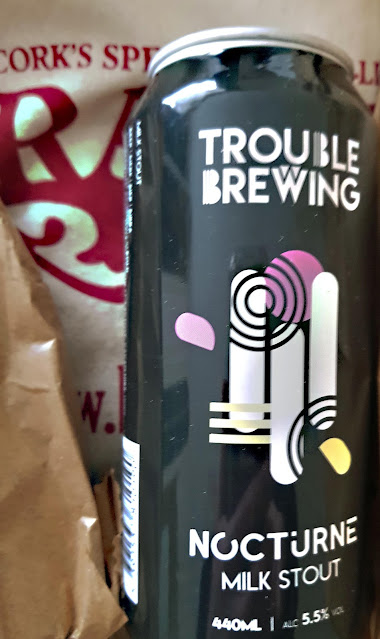 This limited release looks well in the glass. Black with a creamy tan head that is unhurried. A big whiff of coffee in the aromas. And the coffee again, with sweet chocolate notes now, on the smooth palate. Sip away all that delicious creaminess to a very satisfactory ending. Smooth and easy all the way. No Trouble at all!

Founded over 10 years ago Trouble Brewing is a 100% Irish-owned and independent brewery, located in Kill, Co Kildare. “Everything we do is driven by the desire to produce the highest quality, best tasting beer for our fellow beer lovers. …We mainly brew hop forward, session beers to be enjoyed by all, but we’re always happy to experiment — only a few ideas are too dumb.” 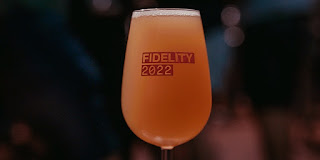