A Quart of Ale± #86. On the craft journey with a session of Hope, Porterhouse, Treaty City and Journeyman

On the craft journey with a session of Hope, Porterhouse, Treaty City and Journeyman

A bit late to the party here. This is the 5th anniversary brew for Dublin’s Hope Brewery and was launched in the middle of 2021.

They say: It was our Limited Edition 16 and you voted for its return as our official birthday beer! We brewed it using Norwegian Kveik yeast, flaked Irish oats (creamy) and our own home-made oat milk to give the beer a smooth body and hazy appearance.

It comes in an amber colour,  hazy (but you can see a crowded bubble scene, all on the up) while the head fades away soon enough. The aromas are modest but nonetheless complex with hints of the hops apparent. And it is certainly tropical on the palate, a quality for which the Mosaic hop (used in the dry-hopping) is noted. For all that, the sweet malt has its chance to shine in a very satisfactory anniversary beer indeed. For me, better late than never!

Founded in June 2004, Hope is now a proud local brewery at Howth Junction and drew its customers into the birthday celebrations, asking what would the celebratory brew be. “After all the votes were counted, Limited Edition #16 Overnight Oats IPA was the clear winner." Brewed in 2019 for the fruit time, the customers appreciated, among other qualities, the body and smoothness thanks “to the flaked oats and oat milk”.

That unique Norwegian Kveik yeast also contributes to that tropical flavour and complex aroma. American Ale Yeast and the British Brett may be tops of the tops in yeast but Kveik is coming up fast, another illustration that “brewers and beer drinkers owe everything to these single-celled fungi”, that quote from Craft Beer for the Geeks. Kveik is getting popular here: Eights Degrees, Metalman, and Wicklow Wolf have been among its users in recent months.

A light orange is the colour of this 4% Sundown Session from Porterhouse and it comes complete with a soft white head that hangs around for a spell. Not surprisingly, given that Citra, Mandarina and Simcoe are three of the hops involved, both the aromas and flavours feature citrus in a lead role. It is a little more complex than that though as you’ll also find no shortage of more exotic fruit plus a touch of pine at the finalé.

They tell us that it is refreshing and you can sense that yourself the second it hits the palate. So plenty of hops, flavour and refreshment all wrapped up in a 4% package. Not bad at all! May not satisfy the out and out hop heads though as there is little enough bitterness here - IBU is low at 10. Still, should be a popular session beer, which was the intention. 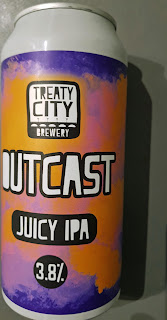 Yellow, very pale, is the colour of this cloudy session IPA from Treaty City. It has a “massive” all-American hop line-up of Idaho 7, El Dorado, and Columbus (also known as CTZ), so expect pine, tropical (pineapple), citrus, dank, pepper and pungent in aromas and flavours. That is more or less what you get with quite a bit of fruit on the palate before a dry finish. And that US hop trio certainly lend it a hefty hit, no doubting its hoppy credentials. Overall, it is more than a satisfactory session beer though some would prefer a bit more malt input.

Malts by the way are: Pale Ale, Munich, Oats, Wheat 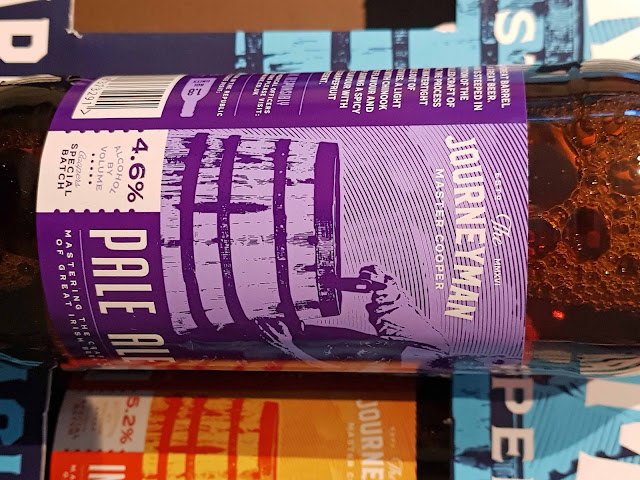 Amber/Gold is the colour of this Pale Ale from Dundalk; it’s got a soft white head with some stability. Hazy enough but not so much that you can’t see the shoals of bubbles rising. There’s a moderately intense scent, grapefruit and pine. And more of the same on the palate where the malted barley and wheat make their presence felt. Actually, it all comes together quite well.

The producers of Journeyman, at the Pearse Lyons Brewery, say of this Cooper’s special batch: “You need a great barrel to make a great beer. Journeyman is steeped in the tradition and highly skilled craft of coopering, the process of making watertight barrels out of wooden staves.”