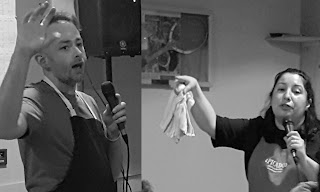 Horrible Hannah blows outside but inside Lily Ramirez-Foran and her chef friend Anthony O’Toole are cooking up a super-tasty Mexican storm as part of the 12th annual West Waterford Food Festival. A warm welcome and soon we are seated with scores more in the Causeway Tennis Club in Dungarvan.

The service began with Botana and Beer. The beer was top class stuff as always from the Dungarvan Brewing Company, who were combining for the second year running with Mexican Lily. The initial event was in the brewery but such was the demand for tickets that it was obvious a bigger venue was needed for this year.

Back then to the Botana and Beer. Not your usual beer though! This was the Dungarvan Mine Head after a make-over, transformed into an Ale and Chili Margarita, with the aid of Hibiscus and lime. Sounded well, tasted better. And there were some tasty nibbles to go with the Déise Margarita: handmade Corn Chips, Spicy pepitas, Salsa Verde, De Arbol Salsa Roja.

Lily is the founder of Ireland's first Mexican boutique grocer and cookery school, Picado Mexican in Portobello, Dublin 2, and has been here for the past 19 years with her husband and business partner Alan Foran (also helping out on the night).

Anthony O’Toole is a private chef, curating one-off food and drink events for a wide range of clients. He is quite a gardener as well and this was not his first collaboration with Lili. They gave us an idea of what we would be eating for the evening and advised to use our hands (we did have a fork!) and pile up our plates as there’s not much sympathy for slow eaters in Mexico.

Sally Barnes is a recent favourite of Anthony's and her smoked mackerel (wild, of course) featured in the Comienzo, the starter. Its full title: Sally Barnes Smoked Wild Mackerel Tostada, pickled Jalapeños, the Sea Gardeners’ Toasted Dillisk. First bite and I knew I was on a winner. A superbly made starter, a smooth combination of delicious flavours and textures.

On then to the Taquiza, the mains. There were two and we got both, everyone did. First up was Anthony’s Crown Prince and Waltham Butternut Squash with Ancho Chili Crust, peanuts and sesame Salsa Macha, Citrus Créma, and Mexican Slaw. It may not have looked the best but scoop the squash up into the hot tortilla, add a little from the dips on the table and some of that Mexican Slaw (with lime juice, I think) and nobody around me stopped with after just one. It was excellent. 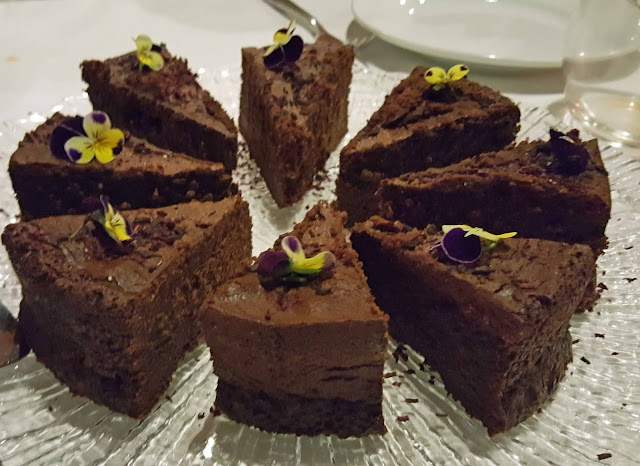 And then came another dark offering but another superb dish: Old Farm leg of pork braised in Mine Head American Pale Ale (also by Dungarvan Brewing), Gaujillo and Mandarin Adobo Fried Jalapeno Salsa and that excellent slaw again. The pork, thinly cut and perfectly cooked, was delicious and again those tortilla warmers were empty in no time, replacements arriving just as fast as the punters dug into the irresistible deliciousness.

By the way, the matching beer for the starter was the Blonde Ale and for the main course we had their Copper Coast Red. But there was plenty of beer and no compulsion. If you preferred it vice versa, that’s what you got.

The final beer, with the Postre (dessert), was Black Rock Irish Stout. And that dessert was Tequila, Chipotle and the Proper Chocolate Company 85% Dominican Republic Chocolate Torte, with sweet créma, pomegranate, and Crystallised Hibiscus dust on the side. Quite a finalé to a lovely evening in Dungarvan. Final score: three sets to love for Lily and Anthony.