Clare: A County of Cliffs and Karst, Caves and Cheese. And so much more!


Clare: A County of Cliffs and Karst, Caves and Cheese.
And so much more!

You think of Clare, and the Cliffs of Moher and The Burren (a Karst landscape) always come to mind. They are indeed amazing visits but there is so much more as I found out in a recent two day trip.

There are two excellent cave visits. Aillwee is probably the best-known but this time we choose to go to Doolin to see the extraordinary stalactite there. We visited two cheese makers, the well-known St Tola and Burren Gold. Then there was the Burren Perfumery in an isolated spot but still managing to employ over 30 people in the season.

As you travel between the perfumery and Aillwee you’ll the grey Burren stretching away at either side. And here too there are reminders of the past, a castle (Lemanagh), a fort (Caherconnell) and, most memorable of all, the ancient tomb at Poulnabrone. Just a few of the many attractions listed on the very helpful leaflet Burren and Cliffs of Moher GeoPark.

Okay, let us start with the cheese. We spent most of the first morning with Brian at St Tola and you may read all about it here. Our last call that afternoon was to the Farm Shop at Aillwee Caves where, if you’re lucky, you can see the Burren Gold being made. We had a lovely chat with Dave here  and an even lovelier tasting.

In between the cheese stops, we called to our B&B, the Fergus View, and got detailed directions for the afternoon from a very helpful Mary. And that was how we ended up at Poulnabrone.

This is a Portal Tomb built, from great slabs of limestone, over 5,000 years ago (around the same time as the pyramids were being built) on the grey pavement of the Burren. The remains of over 30 people have been found on this ancient site. It is indeed much smaller than the pyramids but still you look at it in awe.

And that awe continues as you eyes take in the extent of the grey pavement  (formed 350 millions years ago) all around as it stretches into the distance and you pick it up on the flanks of the distant hills.

And we got more great views of the unique landscape as we made our way to Sadie Chowen's Burren Perfumery . This  small company is “making cosmetics and perfumes inspired by the landscape around us. Everything is made on site, by hand, in small batches”. They include perfumes, creams, soaps and candles in the portfolio. We enjoyed  a little tour there through the perfume area, the herb garden and the soap room. There is also a Tea Room with homemade local food. The perfumery is open daily all year round.

The following morning we headed for Doolin on the coast, not to take a boat to the Aran Islands and not to take one along the Cliffs of Moher, but to visit the cave there. It is privately owned, by the Browne family. In addition to the cave, there is a café and a nature walk.

Mike Dickenson and Brian Varley, from a Yorkshire pothole club, discovered the cave in 1952. They crawled in. You don’t have to do that nowadays but you will have to bend down in certain parts. We had a terrific guide in Cathy and first she took us down the stairs which is enclosed in a concrete shaft stretching some 80 feet down; then, with our helmets on, we continued down to 80 metres.

Now, we get “orders” to turn out all mobile phone lights and we are briefly in darkness. A few lights come on in the blackness. Next there are oohs and aahs as the great stalactite is revealed, all 10 tonnes of it, all 23 feet of it (the longest free hanging stalactite in Europe!).  Amazing!

As Cathy takes us around and then under it, we get to know it a little better. One side (the whiter one), with drops of water still dripping, is longer than the other which has no drip and has stopped growing, it is “dead”.

Above ground, the nature trail takes visitors on a short rural walk where you will encounter some farm animals including rare breeds of pygmy goats and Soay and Jacob sheep, ducks and chickens. The ducks and chickens weren’t there on our trip, having been decimated by a rogue mink. But replacements were due! 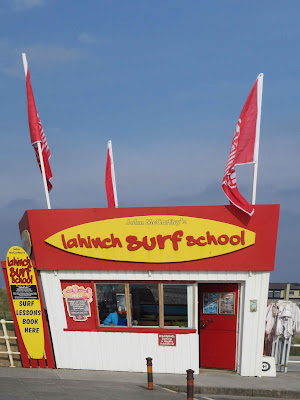 There is also a well-regarded café and a shop and an area where you’ll see some information (mainly on posters) about the cave which was opened to the public only in 2006. As part of the planning permission, there is a limit of around 50,000 visitors per annum.

We had one or two other visits in mind in the Lisdoonvarna area but with the weather bright and clear, if quite breezy, we decided to head for the Cliffs of Moher. And the guy on the parking gate told us we’d made the correct decision, that the views were great.

And so they were. We joined the crowds (11 buses and more than half a mega-car-park full of cars) but the people were well spread out over the area and no sense of crowding at all. We walked and walked and took in the outstanding views.

Something struck us as we strolled around. Most of the visitors were speaking a language other than English and those speaking English had either American or English accents. Of the small group in the morning’s cave visit, we were the only two “natives”. I know it was a working day (Friday) but still we wondered do we Irish really appreciate what we have on our doorstep.

Over the past few years, we’ve often been asked what did we do this year. And we’d mention Kerry, Clare, Waterford, Wexford, Mayo, Donegal and so on. And the response often is. “Yes, but where did you go on holidays?” Quite a lot of us don’t consider it a holiday unless we go abroad.

We finished off the afternoon by taking the coastal route, calling at Liscannor (birthplace of John P Holland, inventor of the submarine) and a very lively Lahinch where surfers and golfers were out in force before reaching Berry Lodge at Spanish Point. Here we got a splendid welcome from owner David.

Plan to head to Clare again fairly soon, perhaps starting in the southern part of the county. Anything I should see, visit? After that, I’ll fill you in on a few places to eat and stay.