A Day and a Night on the Ring of Kerry.
See. Stay. Dine. Visit. 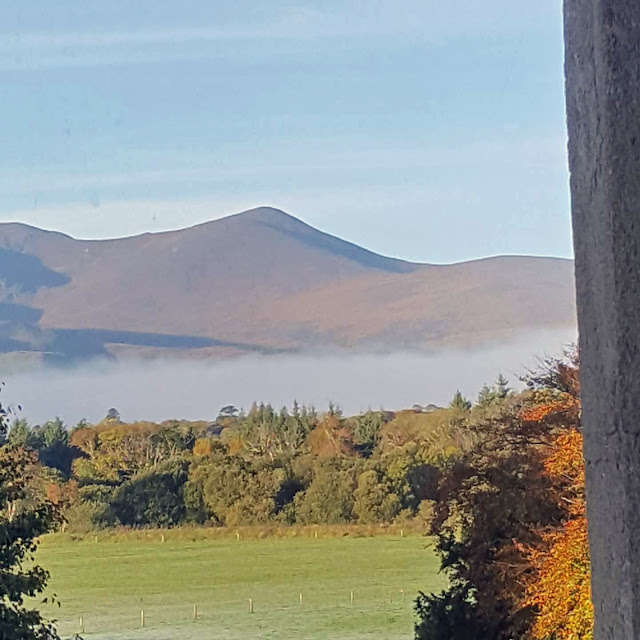 Some foodie shopping had been notionally lined up for this October morning. But the sun shone so brightly, the landscape looked so inviting, even from our hotel window (above), that we decided to spend the day outdoors, outdoors on the beautiful Ring of Kerry.


And that was the new, if last-minute, plan as we drove off from Killarney in the direction of Killorglin, the home of King Puck whose feisty statue greets you as you enter the town.


We had no need to stop in Killorglin this time. But if you haven’t been, you could well take the short walk from the town centre over the old railway bridge. Go to a big car park just off to the right of the one-way (up) main street. Park there and walk downhill with the church to your left. Then up a slope, again on the left, as a metal bridge looms overhead. Up on to the bridge, the old railway bridge, from where there are very good views of the River Laune and the road bridge that you just crossed.

Feel like a mid-morning snack? Check out Jack’s Bakery & Deli, on Bridge Street, and they’ll feed you well and you can take your well-filled baps outside to the street side tables.


There will be photo stops today, lots of them. After all, you are driving on one side of the Wild Atlantic Way and across the bay is the Dingle Peninsula. On a day like this, you can even see the beautiful Inch Beach where part of Ryan’s Daughter was filmed.

A place worth calling to between Killorglin and Cahersiveen is Kells Bay. We enjoyed a tour of the gardens (and the swing bridge!) there a year previously.


On now to Cahersiveen, from where you can take the short ferry to Valentia Island where there are terrific walks and views to enjoy; don’t miss the 385 million year old tracks of the Tetra Pod and also the lighthouse.

Cahersiveen (make sure you spell it correctly when entering it into your Sat-Nav!) is a busy enough town, boasting attractions such as The Old Barracks, the Daniel O'Connell memorial church and ancient stone forts and that ferry to Valentia. But the island, and the Skelligs Ring, is too much of a detour for us today and we carry on towards the pretty village of Glenbeigh.


Our main stop is at Waterville on the huge and scenic Ballinskelligs Bay. Both Charlie Chaplin and General de Gaulle holidayed in the area. Indeed, there is a sculpture of Chaplin alongside the beach but, perhaps because of a rough looking character sitting alongside Charlie, no one seems to be taking his photo today. De Gaulle by the way has his sculpture in Sneem.

A more recent Waterville “statue” of a living legend, footballer Mick O’Dwyer, has no such distraction. There is also another sculpture here and it commemorates the Commercial Cable Company that in 1884 laid two cables across the Atlantic connecting Canada, Britain and France all via a station in Waterville.

The first message from Waterville to St. John, Nova Scotia, passed along the transatlantic cable on Christmas Eve 1884. The cable station in Waterville was operational from 1884 – 1962. Read more here.

We had enjoyed a hearty breakfast, as always in the Cahernane House Hotel, and didn’t need much of a mid-day meal. Not too many cafés in Waterville - bigger choice in Sneem. After a good walk, we headed for the Beachcove and enjoyed an excellent pot of tea (of generous proportions) and slices of well made apple tart, chunks of real apple here, none of that stuff squeezed from a tube!).

They say do the Ring in the anti-clockwise direction and so we did, leaving Waterville and heading now towards Sneem, with the Atlantic on our right, one fabulous view following another, some back towards Waterville and the bay, and more as we came towards Derrynane, home of The Liberator Daniel O’Connell.

And soon, we were in Sneem, the sun still shining strongly, people eating and drinking outside, a man playing classical guitar, another serving coffee and crepes from a mobile van. Hey, I asked myself, what country am I in. But look, I know where I am. Maybe my momma told me, maybe she didn’t, but I often get days like this in Ireland. 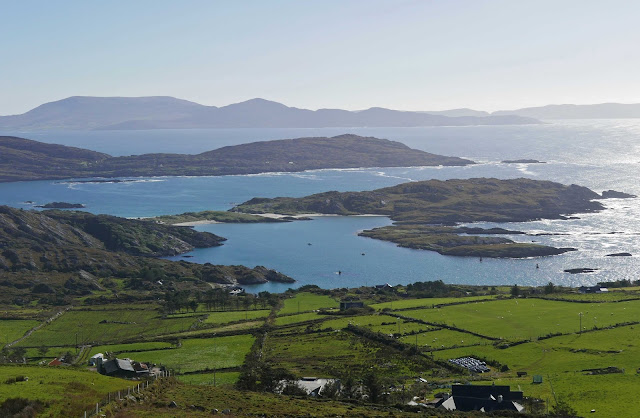 We have been in Sneem quite often and have seen quite a few sculptures here. This time, on the road in, we saw signs for a Sculpture Park and started looking for it. But, as we walked around, we found it is really a sculpture trail, spread over three small parks.

We did see one new one, that of the famous Kerry footballer John Egan who died too young. Like his family and friends, we would have preferred to have had to wait much longer for the event that gave rise to the memorial, nice and all as the statue is.


So now, we said goodbye to the Ring of Kerry. We could have headed into Kenmare but we had been there a few weeks earlier and instead took the high road towards Molls Gap. Again, there are spectacular views, this time mostly of the mountains. We also pass the Strawberry Field and its Pancake Cottage (below) where we’ve enjoyed a tasty snack from time to time! 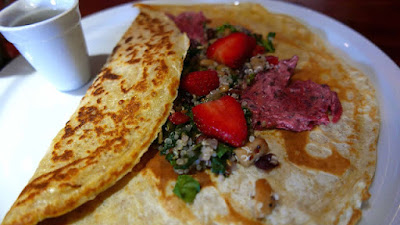 The views as we pass the high point of Moll’s Gap are now of the Lakes of Killarney and spectacular views they are and you can easily see how they would have attracted tourists especially in Victorian times when the railway arrived in the town. Soon, after negotiating 1001 bends on the narrow road, we would arrive in the town.


We have dinner at a relatively new venue, Murphy Browne’s on High Street. Nothing cutting-edge in the cuisine offered here but they do their stuff well and turn local produce into very attractive meals indeed and the service is also excellent.

Our base for the night is the very centrally situated Killarney Lodge. It has 17 rooms and is just three minutes from the town centre. The rooms are spacious and very well equipped and the breakfast is top notch, served with a smile and a chat.

And so it was with a smile on our faces that we left the Lodge and headed up the N22, back to our city by the Lee, knowing that the magic of the Kingdom is just about 90 minutes away!