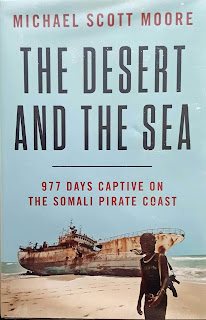 One afternoon, a number of rainbow runners were lying on the deck and I took a filleting lesson from Em Phumanny, the bowl-cut Cambodian with Buddhist tattoos. We planned to make kinilaw, a kind of Filipino ceviche made of a cold, chopped, vinegary whitefish. “The fish is not cooked, you know?” said Tony, “It is cured in the vinegar.”
I squatted in the sun near the cutaway rail while the pirates watched us drowsily.

from The Desert and The Sea (977 days captive on the Somali pirate coast) by Michael Scott Moore (2018). Very Highly Recommended.