Oslo Bar Galway. Great Spot For Lunch and Craft Beer. And a distillery up the stairs!


Oslo Bar Galway. Great Spot For Lunch and Craft Beer
And a distillery up the stairs!

Galway Bay has just moved its brewery from “mothership” Oslo Bar in Salthill to Ballybrit. But fear not: the bar is still serving up the iconic Galway Bay brews such as Full Sail, Bay Ale, Stormy Port, Buried at Sea, Of Foam and Fury, and Althea as we found out this week when we visited for lunch and a tour of the Micil Distillery that has replaced the brewery at the rear of the premises.

The Galway Bay website: “The Oslo was the start of Galway Bay Brewery and remains our ﬂagship pub based in Salthill; our owners Jason O’Connell and Niall Walsh added a brewery on site in 2009, making The Oslo one of the country’s ﬁrst brew pubs. Since then Galway Bay Brewery has expanded operations to 11 bars based in Galway and Dublin and have grown and re-positioned the Brewery just outside of Galway in Ballybrit.” 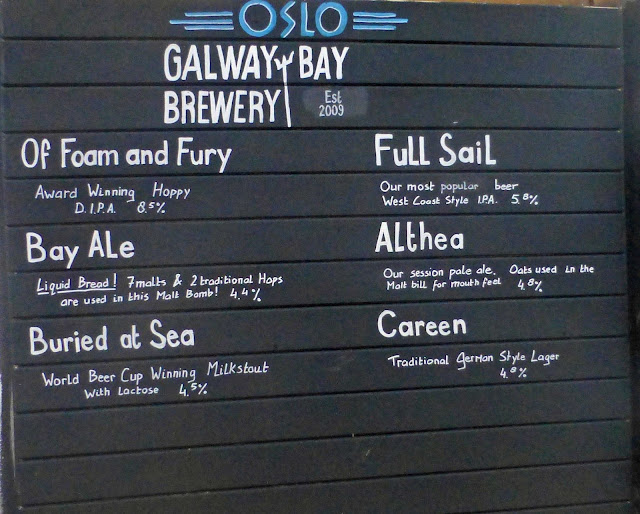 The well positioned bar serves food, lunch and evening meals, every day of the week, mainly in the front half. The rear is more like a beer hall with a huge screen, apparently the biggest in Galway, where all kinds of sporting events are shown. Upstairs and to the rear is where you will find the Micil Distillery, producing Poitín and Gin and about to lay down their first whiskey.

After a two and half hour trip from Cork we were ready for grub when we arrived in Salthill. Parked up near the aquarium and headed around the corner to Oslo. A big warm welcome and soon we had the lunch menu in our hands.

As you might expect, there are a few burgers on the menu, also fish and chips. There is also a Spinach and Sweet Potato Salad, Beer Braised Beef Cheeks, and a kale Superfood Salad.

With a big dinner booked for the evening, we didn’t want anything major so settled for the sandwich menu. There was a Goats Cheese and Chorizo offer with all the trimmings (including chips) for €8.50. But I picked the Grilled Cod Sandwich (with creamy slaw and tartar sauce on a multiseed ciabatta). Excellent. Fish tasted as fresh as could be and good value for €9.50. 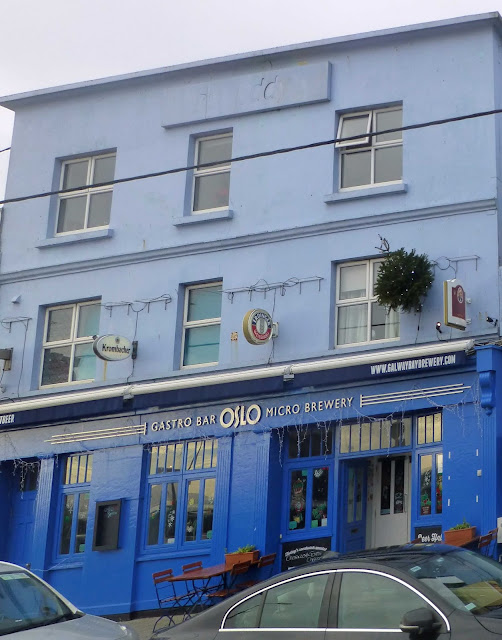 CL’s Black Wrap came in at a euro less and was also well worth it. This Spinach infused tortilla with black beans, avocado, sweetcorn, black olives, leaves, salsa, and coriander with chipotle and lime yoghurt was packed with great flavour and texture. Other sandwiches on offer included Cajun Chicken and Chorizo, Baked Ham and Smoked Gubbeen, Fried Chicken Wrap.

After that and a chat or two with the friendly and helpful staff we were good and ready for our tour of the Micil Distillery. Staying overnight? Why not try the Nox Hotel who have a great offer for January?

* We’ll have to ORSO by night sometime and get stuck into that amazing beer list.