Many of you will know of Vincenzo, the Italian shepherd best known for his Pecorino which is on sale at the Toons Bridge Market stalls.That was his first cheese here in Ireland but he has quite a variety now including a stunning new one called Conciato Romano.

While there were quite a few old favourites, such as the classic Coolea and the outstanding St Tola, showing at the weekend’s Cork Cheese Fair in Cork Airport, there were quite a few new or at least relatively new ones, including Vincenzo’s, Cashel Blue’s Organic version, the aromatic Italian Truffle Cheese from Carrigaline Farmhouse, Rockfield (a hard sheeps cheese from Velvet Cloud of Claremorris) and Hegarty’s Templegall. 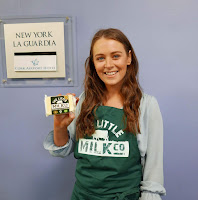 The Little Milk Company also had a beautiful Mild Organic Irish Cheddar. Jessica told me it is flying in Germany and Denmark and should be on the home market soon - so watch out for that!

The Conciato Romano is an ancient Italian cheese, indeed many believe it is the country’s oldest, and its production is being encouraged by the Italian Slow Food Foundation.

Vincenzo’s is made from sheeps milk but goats or cows may also be used. After being pressed by hand the forms are cured and dressed with olive oil and vinegar and herbs before being packed in a sealed jar (or amphora) and matured. “It sells well in the markets,” he told me and, for the moment, you’ll probably have to travel to Skibbereen where he has a stall every Saturday to get it (and his other very interesting variations).

Always a fair bit of variety in the Carrigaline Cheese portfolio and now there’s a new one, an Italian Summer Truffle. “A small piece goes a long way,” says producer Padraig O’Farrell who is delighted with the way it has turned out. For the moment, you cannot buy it in the shops but watch out for it in restaurants (it is available to chefs via Pallas Foods). Reckon there will be some beautifully aromatic dishes created using this one! 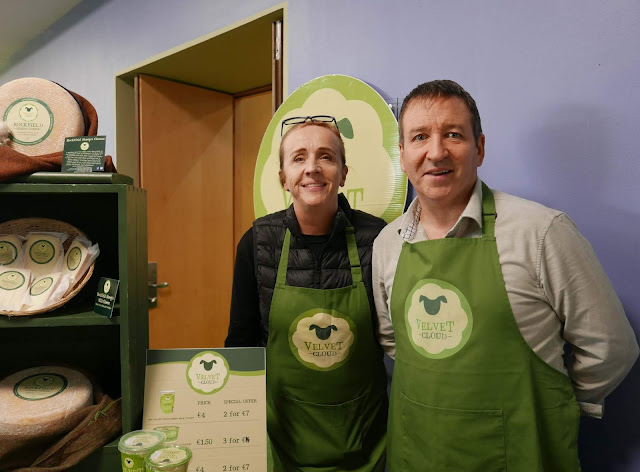 Aisling and Michael (above), the duo behind Mayo’s Velvet Cloud, have become well-known because of their yogurts but now their Rockfield cheese is getting very popular as we found out during the Cheese Dinner that preceded the fair.

It is creamy and buttery in the mouth with slightly sweet and nutty undertones. The cream coloured interior of this cheese becomes firmer and darker as the maturing period is extended and the flavour becomes nuttier. Supply of this lovely new product is fairly limited this year and Cork buyers can find it in On the Pigs Back. Should be more of it available next year and probably more stockists as well.

Hegarty’s Templegall comes in a big wheel and is a gorgeous delicious Comté style cheese. Dan Hegarty and Jean-Baptise Enjelvin (from Bordeaux but very much enjoying the “craic” in Cork) are rightly proud of this magnificent effort from the Hegarty’s Whitechurch farm.

It has been earning plaudits for the past few months. It is available in cheese shops such as On the Pigs Back and you’ll also come across it in restaurants. And don’t forget that Hegarty's are famous for their cheddars.

Cashel Blue is also very famous and their newish Cashel Blue organic is a another gem. “More mature than the original,” PJ Ryan told me on Saturday. “More of a hit to it but the same creaminess.” You can get this in cheese shops, including Iago.

Also tasted their lesser known Shepherd’s Store, a traditional, European style semi-hard cheese. As a seasonal product, it is made only between the months of February and September, and is aged for a minimum of six months. Try it out at On the Pigs Back.